The book provides an insight into the strategies of the world's most successful investors. But pick it up only if you are a long-term investor.

A singular challenge for those who deal with the stock market is to develop the ability to track its spoor correctly and predict its direction accurately. Considering that the market is influenced by multiple factors, it's no cakewalk to predict what direction the beast will take in the short term, and often, the form that it might morph into, bull or bear.

The collective influence of various factors can create enormous variations in intra-day movements alone, and these developments significantly impact both the psychology and behaviour of market participants.

Most investors, whether individuals or institutions, tend to move in and out of the market every time it rises or falls, an action that most often yields less than expected returns. The anxiety associated with short-term fluctuations is so substantial that not even the most professional investors are spared. There are studies proving that even the best fund managers often fail to beat the market. These studies seem to be in consonance with the theory of random walk, which states that the market moves in an unsystematic manner and it is almost impossible to predict or beat it.

Still, many people believe that no matter how much volatility the markets exhibit in the short term, in the long run it moves around its intrinsic or fair value. It's a view based on the fact that there are inherent inefficiencies in the market and one can succeed in beating it by recognising and buying stocks that are trading at prices lower than their intrinsic values—the price derived from fundamentals like sales, earnings, dividends and assets.

The strategies that such people have adopted have helped them demolish the theory of random walk by consistently defeating market returns over the long term. You can learn their market winning strategies by reading The Guru Investor by John P. Reese and Jack M. Forehand. A caveat: pick this book only if you are a long-term investor and strongly believe in fundamental analysis. It does not serve the purpose of short-term investors and day traders. 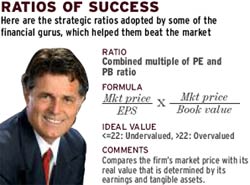 The authors have selected 10 investment gurus after a rigorous analysis of their track records using simulated computerised models. They thoroughly cover their qualitative and quantitative strategies as well as the tools and techniques they used for stock selection. The crucial similarity is that all the gurus believe in long-term and disciplined investing and suffered because of the short-term vagaries of the market.

The authors have segregated these 10 achievers into three groups: value legends (Benjamin Graham, John Neff, David Dreman); growth legends and pure quants. The book accords Graham the accolade of the grand-daddy of other investment gurus. He believes that buying a stock implies buying the company itself, its profits, debts, assets and sales. The greatest investor of all time, the sage of Omaha, Warren Buffett also prefers companies with strong brand recognition and whose businesses are easier to understand (like consumer goods). Buffett also uses a mathematical model for determining the fair value of a stock.

Among the growth legends, Peter Lynch has developed the important concept of PEG ratio and Kenneth L. Fisher is known for his price-tosales ratio. In the pure quants, Joel Greenblatt is famous for his magic formula— the combination of two financial ratios, return on capital and earnings yield.

Each guru's investment philosophy is presented in a detailed manner. But to understand Buffett's quantitative model, the reader needs to be familiar with the concept of time value of money (present and future values). Most of the ratios and financial indicators used are readily available on finance Websites like moneycontrol.com and money.rediff.com. Many company reports and analyst reports are also loaded with such financial indicators and ratios. However, non-availability of ideal values makes their interpretation quite difficult. For instance, it's difficult for investors to determine whether a company has performed well because it has a ROE (return on equity) of 10% or whether a stock is a good buy at a PE of 25.

Still, the book gives what the gurus consider the best values for the ratios and the limits they use in stock selection. What it lacks is numerical examples. It's valuable for investors who wish to learn fundamental analysis in detail and acquire expertise in stock selection. Read it for the pure insight it offers into the functioning of the best financial minds.