Dishing out a tasting menu

In the tradition of small-plate dining, this book tells you a little about everything. It’s a bid to find financial wisdom in unconventional places. 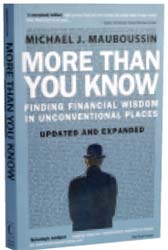 Why won’t you bet on a game where you either gain Rs 200 or lose Rs 100? Why, even though you know that the square of one is one, you are confused if others claim it is two? Why do you think that every time you wear red, India will win a cricket match? Why are you sure that because it has never snowed in Shimla during your annual March trip, it won’t snow this year too? And does any of this have anything to do with finance?

More than you know, says Michael J. Mauboussin in his eponymous book. In human psychology, he claims, lies the answer to many investing mysteries. For instance, it is because of the inherent loss aversion that you would rather not gain Rs 200 than lose Rs 100. A loss impacts us 2.5 times more than a gain of the same magnitude.

For someone who has read Nicholas Taleb on probability, this is like a revision class. Those conversant with Daniel Kahneman will recognise this as an outcome of the prospect theory. Actually, Mauboussin is not an exponent of theory, but an an aggregator of ideas. There are numerous references to theories of noted economists, mathematicians and investing legends. So why should you read the book?

For two reasons. The first is that it’s difficult to find such an eclectic mix of the best recent investing and scientific philosophies elsewhere. Reading Mauboussin could save you months of scanning and distilling varied information. In fact, you could use this book as a catalogue and read the theories that really appeal to you, as he appends a 34-page bibliography at the end.

Second, Mauboussin hasn’t limited himself to accumulation. In each chapter, he validates the theory with examples, points out the flaws, if any, and concludes with the way it impacts investing decisions. Take his criticism of Laplace’s theory that there is a single formula of cause and effect, which explains the past, present and future of a particular system. Mauboussin says that the media’s daily attempt to explain the stock market movement is an application of Laplace’s ideology. To validate its absurdity, he tracks the biggest moves in the US market between 2001 and March 2007 and the press reports on their causes. The result: “The press sounded a lot like a splitbrain patient making up cause for an effect.”

For investors, the message is clear: Don’t confuse correlation with causality. Remember the superstitious red T-shirt and the probability of India’s victory.

While such an expansive approach to finance has its merits, one big disadvantage is identifying a unifying theme. As per the author’s own suggestion, this theme is finding financial wisdom in unconventional places. For instance, the hot-hand theory in basketball explains that a long streak of success is not luck, but high probability; the short reproduction cycle of fruit flies tells you how accelerated business development has reduced the period of competitive advantage for companies; the victory of IBM’s Deep Blue over chess grandmaster Garry Kasparov proved the redundancy of experts in a world that has set rules and offers limited freedom.

Mauboussin, however, falls victim to excessive diversity, the mass of information is difficult to categorise. There is one pattern, though, (purely coincidental) that organises the ideas without limiting their reach. It is a series of contrasts, each having a surprising and useful inference for the investors.

Among the first concepts that come under review are payoff and probability. Mauboussin says that investment decisions should not be based on how markets are likely to behave, but on the impact of either possibility on one’s portfolio. It is the difference in the payoff between loss and gain that should affect your decision, not probability.

While speculating on the payoff, Mauboussin suggests you look at the actual, not the average, returns. A review of the performance of equity diversified funds in the past six months demonstrates the disparity between the average category returns (54.3%), and the actual returns of the best (88.8%) and the worst (15%) funds.

There are several such differentiations that force a review of the fundamentals of investing. Mauboussin contrasts uncertainty and risk, satisfactory and maximum returns, fat tails and normal distribution, etc. His singular contribution is on the difference between individual and collective behaviour. Mauboussin trashes the idea that the sum of individual reactions constitutes the collective. In fact, individual reactions cancel each other out, so deductive reasoning in the stock market is a blunder. However, if the majority of investors act in a particular manner, the result is a stock market boom or bust.

Mauboussin’s collection of facts is impressive, but there is a serious information overload. So read a couple of chapters at a time. Mauboussin assumes readers have an evolved knowledge of market dynamics, so don’t be disappointed if you find yourself Googling more than reading.

Is it worth the effort? If you are a finance buff, yes. If you have a little knowledge about a lot of things, yes. But if you are fascinated by psychology and probability, no. Frankly, Taleb has done it better and is far more engaging. So you can give Mauboussin a go-by and stick to the stalwart. Hopefully, Mauboussin won’t mind.