For long-term investors who understand a few economics fundamentals, this book is likely to improve their chances of investment success.

Which comes first? The fundamentals or technicals? Analysis of financial markets is often based on these two broad disciplines and the relationship between them has been a cause of much debate. 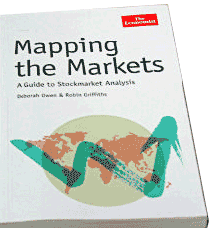 However, both technical and fundamental analyses are influenced by macroeconomic factors. The book— Mapping the Markets— explains the phases through which an economy moves and links it with the stock market. The authors, Deborah Owen and Robin Griffiths, strongly believe in economic cycle theory and feel that stock markets and economy move in a wave like pattern which is repetitive.

Those who want to benefit from the next big wave of economic boom, must pick up this book but only after brushing up on basic fundamentals of statistics like standard deviation, averages, etc, along with the concepts of macroeconomics.

Starting with the economic cycle theory in the first chapter, it highlights longand medium-term cyclical patterns which were discovered by some eminent economists like Nikolai Kondratieff, Joseph Kitchen and Joseph Schumpeter. In the next chapter, the authors explain some stock market cycles, like the fouryear and 10-year cycle which is usually seen in the US markets. They also give an insight into the seasonal variations in stock prices. The interaction between economic cycles and stock market cycles are also explained.

The process of cyclical movement in sectors is explained in the third chapter. The process shows how recovery starts with reduction in interest rates followed by improved stock performance of interest rate sensitive stocks followed by consumption stocks, rising investor confidence, realisations of high valuations of stock prices, asset bubbles and ultimately declining optimism and recession. The next chapter looks at some of the stockpicking techniques using technical analysis. Some of the techniques explained are moving average crossovers, relative strength index, support and resistance. The book strongly supports technical analysis and criticises efficient market hypothesis due to non-Gaussian properties (meaning data does not follow normal distribution) of stock prices.

Owen and Griffiths also deal with some of the factors that could lead the global economy into recession. They express concern on US current account deficit, rising housing prices and low saving ratios as forces which could drive US economy towards recession. Since US economy has inter-linkages with world economies a recession in US will have a domino effect on other economies. Diseases and water shortages are two other factors highlighted which can have negative effects on the growth of global economy.

According to the authors, the Indian economy is in a position to command a premium over other emerging economies because of its investments in infrastructure and grow -ing recognition among international fund managers. The Indian stock markets are in a grip of strong secular uptrend and likely to be at the peak during 2014-20. The authors see India as a global economic force during 2014-20 and also warn of asset bubbles that will start forming after that period. In other words, the economy will move on the downward phase after the peak and the cycle theory will prevail.

Overall, the book presents a macroeconomic view on the stock markets. It explains how some factors like interest rates, exchange rates, balance of payments, demographics and energy help in judging the future direction of the stock markets. The best strategy for investors is to identify the phase in which the stock market and economy is operating and then decide whether to be aggressive or defensive.

The book is a good read for students of macroeconomics, academicians, teachers, policymakers and investors who want to invest for a very long period of time.

Not really a DIY guide

Options before you make an option