The triple forces of liberalisation, privatisation and globalisation (LPG) are effecting investment environment across all asset classes. Here’s a book to pick up your first lessons in global economy. 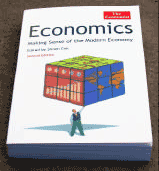 There are various ways to divide the subject matter of economics. One of these is in terms of the big picture or macroeconomics, contrasted with the behaviour of individual economic agents (consumers, producers) or microeconomics. Much of policy is associated with macroeconomics. But most people find it easier to identify with microeconomics, since each one of us wears the hat of consumer, if not producer, of both goods and services.

Microeconomics seems to talk about principles that are direct, for instance, decisions about consumption expenditure or savings. Incidentally, the word “investment” is often used loosely. That’s not investment from an economist’s point of view. From that point of view, investment occurs only when there is an addition to the productive potential of the economy. The common usage of the word investment is only a deci -sion about what form to keep one’s savings in. In contrast, macroeconomic principles determine the environment we operate under. It is just as important, even though it seems more alien and distant.

Contrary to what is often thought, economics doesn’t offer clear answers. It is more like a bag of tools, an approach and a prism through which one analyses phenomena. Ever since it was set up in 1843 as opposition to Britain’s protectionist Corn Laws, The Economist has argued against protectionism, populism and paternalism and in favour of free choice.

Notwithstanding talk of liberalisation, privatisa -tion and globalisation (LPG), these three Ps have pervasive influence. Consequently, there is more than tilting at windmills that is at stake. Stated differently, one believes in markets. Unless of course there is a case of markets failing, with the caveat that what one regards as market failure is often not quite that. As everyone knows, The Economistis a magazine and magazines must produce good copy, unlike academic tomes.

Otherwise, they will not be read. Therefore, pieces that appear here are far more reader-friendly expositions of LPG, peppered with analysis of real-life issues rather than abstract theory. This is a collection of articles (with a bit of revision) that have appeared in the magazine. While Simon Cox is the editor, nine others have also authored or co-authored various chapters in the book. There are nine “chapters” and this is a bit of a misnomer. These chapters are titled “The Case for Globalisation”, “The Phoney Recovery” (in the US), “America’s Imbalances”, “China’s Rise”, “The Underachievers” (Japan, Germany), “Finance”, “Central Banks”, “Global Capital” and “The Uses and Abuses of Economics”. A magazine article has a short word count. Hence, the use of the word “chapter” is misleading, since some chapters have shorter subchapters.

As these titles suggest, most of the articles are not only macro, they are also about the global economy.

There won’t be much direct connection with your individual economic decisions, except that if you want to know about what is happening in the global economy (pros and cons of globalisation, WTO, US current account deficits, the Chinese rise and Chinese exchange rates, German and Japanese problems, banks and financial flows, financial crises, central bank dilemmas, inflation, unemployment, FDI, exchange controls, the Zimbabwe disaster, global warming, regulation and competition policy, foreign aid, pension reform), there is no better way to start.

However, do realise there are caveats. First, this volume wasn’t planned out as a book when the pieces were written. The pieces were written as reactions to specific events and thereafter, strung together and reprinted in book form. Everything you want to see in a book like this won’t be there. Therefore, don’t expect comprehensive coverage.

Second, there is little on India, unlike say, China. The references to India are those of missed opportunities thanks to import substituting industrialisation, insularity and foreign aid. Third, to reiterate the point made earlier, barring two articles (subchapters, not chapters), the others are macro. These two are “Shared Values” and “Freud, Finance and Folly”.

Of these, the first is on how shares and stock markets should be valued by investors. The problem is complicated by uncertainty about future income flows, subjectivity about discount rates and risk premia. “Freud, Finance and Folly” covers terrain unfamiliar to most people, including economists who don’t specialise in what is now called behavioural economics.

Economics is based on “rational” behaviour by economic agents, defined through a few rationality axioms. However, these are axioms or assumptions and there is no obvious reason why these should be satisfied. And experiments have shown that individual decisionmaking often deviates from these axioms. Read the book to figure out how “irrational” you are. In some ways, these two articles should help your personal finance decisions. And the other articles will only make you better informed.

Here's a textbook for investors