Find out if the returns from investing in a mid-career MBA programme justify the move. 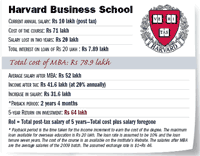 Click here to Enlarge
It was a halo gracing any resume. You couldn't do better than an MBA degree even if the institute didn't trace its lineage to an Ivy League. Questioning the costs involved or the risk of taking a career break was blasphemous. Nobody asked whether the sky-rocketing fees were worth the course.

Now they do. The reasons are obvious: MBA degrees no longer come with the guarantee of a cushy job. Kris Lakshmikanth, founder CEO and MD of the Head Hunters India, says, "I know people who left jobs that paid Rs 25 lakh annually to do their MBA and have had to be content with an annual salary of Rs 10 lakh this year. In fact, they may not be able to make up for the deficit soon. They will have to compromise, if not on salaries, then on job content or location, or both."

The future may not be so bleak, but clearly costs should not be overlooked before signing up for a course, especially if it involves taking a sabbatical from work. Click here to Enlarge
While the pre-admission ritual of totting up costs will help you calculate the investment in your career, what about the gains from this move? To estimate the time it will take you to recover your investment or the net increase in your earnings, conduct a simple exercise. Calculate the return on your investment (RoI). While the calculation of the payback period will give you the time taken by your income increment to earn the cost of the degree, the five- or ten-year RoI will tell you how much more you will earn compared to the previous job.

"Even though I had gained admission to a prestigious MBA programme (HEC, Paris) and won a scholarship that covered about 70 per cent of the cost, I calculated the RoI before I joined. As I wanted to work in India after the MBA, it was important to estimate how long it would take to earn the amount I had to spend, as salaries in India are usually lower than those paid abroad," says Akhilesh Chopra, 27, who quit as accounts manager in Avaya to pursue his MBA in 2008. He now works as manager, strategy and alliances, Schneider Electric.

Chopra had calculated the payback period for his investment to be one year. Even though his current salary is lower than he expected, Chopra hopes to meet the deadline as the increase from his previous salary was a handsome 220 per cent. 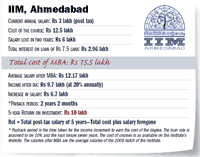 Click here to Enlarge
Will you be able to do the same? As the admission season for Indian and foreign universities kicks in, we do the math for three categories of MBA institutes. The results are surprising. An Ivy League college like Harvard lives up to its reputation of having the highest cost, but its payback period is longer than a non-A lister like Melbourne Business School. The latter's MBA programme costs about half of Harvard's, but its Website boasts a more competitive average salary. This explains why its 5-year RoI is Rs 5 lakh more than Harvard's.

The twister is the result for IIM Ahmedabad. If your post-tax salary is Rs 3 lakh a year, India's most prestigious B-school gives a 5-year RoI of Rs 10 lakh only, assuming you do not outshine your peers and get the top jobs with annual salaries of Rs 1 crore. On the basis of payback period, IIM Ahmedabad scores over Harvard by two months.

An important caveat: make sure you consider other issues like the curriculum, the companies that recruit from the institute, etc, before signing up for a course. Also, do the RoI calculations assuming different salary levels after the MBA. The best part: it need not even be an MBA course. These computations hold as well for a midcareer specialisation in automotive engineering or a doctorate in Shakespeare's heroines. Because in the end, money does matter.