Higher oil prices will mean inflation, lower growth and a weaker rupee - putting paid to a decade of progress. 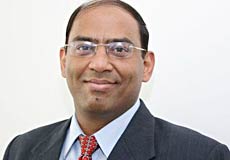 Jayant Manglik, President, Religare Commodities
Crude oil is on the move again and is once again nudging $100 per barrel. The political situation in Egypt has hastened this rise with increasing fear of the unrest spreading to nearby oil-rich nations. The importance of the Suez canal in transporting crude oil to the western countries also propels this momentum. Of course, the direction and trajectory of the price of crude oil would have continued to remain the same, albeit not so rapidly.

There are several reasons for the price spurt and an important one is a weakening dollar, as price of crude oil is denominated in this currency. Also, demand from China and India continue to drive the rate of change in price. If the current crawling pace of the US and European economies picks up, we're looking at a far more rapid increase in price. The supplier math is also compelling.

The Organisation of Petroleum Exporting Countries (Opec) members produce about 30 million barrels of oil per day. So, a change of just $1 makes a difference of over $11 billion a year in income for this select group of 12 member countries-reason enough for them keep prices firm. Demand does play a role but having a monopolistic organisational control over supply does not allow for a market-determined price. Besides, Opec countries also hold 79% of the world's crude oil reserves.

Speculators too have been bullish on crude oil and have been taking positions serious enough for the Commodities Futures Trading Commission (CFTC) in the US to consider clamping down on them.

Increased prices will in turn force new technologies to be used to remove oil even from difficult terrain and even production from marginal fields becomes profitable. Similarly, discussions on alternative fuels have become active but all substitutes have been found to be more expensive than crude, till date. The beneficiary, in the immediate future, could very well be the cheaper and cleaner natural gas. Other alternatives, such as shale gas, are also entering the market. Similarly, wind farms and solar power generators are once again being viewed as viable business proposals.

The effects will be global-currencies will be affected directly due to the balance of payments circumstances of several countries. Also, reserve replacement ratios (amount of new oil discovered to amount of oil extracted) will become more crucial with every passing year. But, hopefully, this is all short term and we could see a downward spiral in a situation where low prices and low demand chase each other as in the late 1990s. But then again, that would signal a recession and it may just be better to hope for fair rather than low prices. We may be creating a gap between demand and supply that a depleting resource just cannot overcome. So long term plans should consider the price of crude and, more importantly, our ability to have a coherent and pre-determined response to oil shocks.

The current state of affairs indicates that the old record of $148 will not last for a very long and natural gas prices too will start moving up, partly as demand closes in on supply and partly in anticipation. India's future is inextricably linked to the global price of crude and a rapid spurt could stymie growth quickly. We import about 800 million barrels a year, so even a $10 per barrel increase means an outgo of Rs 35,000 crore.

We have seen the price rise by $30 over the last six months, which means an extra outlay of Rs 1 lakh crore, if this price is sustained. Higher oil prices will mean inflation, lower growth and a weaker rupee- putting paid to a decade of economic progress and probably leading to political decisions to contain the fallout in the domestic economy. Though tenuous, there is a link between politics in Egypt and India via oil.