With demand remaining strong it may be a good time to have energy commodities - heating oil, gasoline, natural gas and crude oil - in your portfolio.

Are you looking for opportunities to rev up your portfolio? Consider investing in commodities such as natural gas, gasoline, heating oil and crude oil. Market analysts are bullish on these commodities for 2011.

Analysts say investment in the energy pack could be a good deal for investors. Alex Mathews, head of research at Geojit BNP Paribas Financial Services says, "Commodities are likely to remain in the limelight as the equity market grapples with soaring inflation, scams and corruption. Commodity markets are looking strong for 2011 due to strong demand from China. Domestic demand is also strengthening the prices. I think crude oil will trade in a range of $85-105 per barrel in the ongoing year."

Somnath Dey, vice-president (research) at Religare Commodities, holds similar views. "Slow recovery witnessed in the US and the Federal Reserve's policy of pumping money into the system is giving a boost to liquidity and pushing down the value of the dollar. It is likely to make all commodities, including energy counters, cheaper for traders and investors to buy and hold as an asset class and thus, raise their demand and prices," says Dey.

It seems investors have already started taking interest in the energy market. According to the Forward Markets Commission data, the cumulative value of trade in energy during the nine months ended December 2010 was Rs 16 lakh crore, a 30 per cent rise from Rs 12.3 lakh crore in the year-ago period.

"Retail participation is increasing in the domestic commodity market after crude oil rallied towards two-and-a-half-year high in December. More investors are diversifying their portfolio in the bullion and energy segment," says Vibhu Ratandhara, assistant vicepresident (research-commodities) at Bonanza Portfolio.

MONEY TODAY takes a look at the emerging opportunities for investors in the sector, starting with black gold.

Crude oil prices surged last year on account of recovery in the global economy. Strong demand of the commodity from China also pushed up prices. "China's oil demand is expected to swell by 6.2 per cent year-onyear to 483 mt in 2011, and the growth will be lower than last year's increase of 11.4 per cent. Diesel shortage in China has been the key factor in pushing up demand," says Praveen Singh, research analyst at Sharekhan.

Recently, the Organisation of the Petroleum Exporting Countries (Opec) raised the estimated demand in 2011 for the group's crude oil by 200,000 barrels a day to 29.4 million barrels a day. Opec also raised its forecast for growth in global oil demand this year by 50,000 barrels a day.

According to the International Energy Agency (IEA), total world demand was 86.09 million barrels a day in 2010 and it is projected at 87.32 million barrels a day in 2011. "There is adequate supply of crude oil as the US and other OECD (Organisation for Economic Cooperation and Development) nations have sufficient inventories. However, a stronger-than-expected global recovery would bring Opec under pressure to increase supplies," says Singh.

"The dollar movement is likely to remain the driver of prices for the foreseeable future. With fundamentals improving and the dollar remaining relatively weak, we expect prices to strengthen," Shitij Gandhi, research analyst for commodities at SMC Global Securities. Ratandhara adds, "After looking at recovery in the global economy, positive indications from developing countries, growing manufacturing activities in countries like China and Japan and support from strong technical level may take crude oil prices to a higher level in 2011. Brent crude oil already surpassed its psychological level of $100."

A flammable liquid petroleum product, heating oil is primarily used as a fuel for boilers. When crude oil is refined, it yields 50 per cent gasoline and 25 per cent heating oil. Heating oil prices surged in 2010 on local counters taking strong cues from the firm international markets.

Heating oil prices surged in 2010 because of a weak dollar and the prospect of increased fuel imports by France due to rising demand. Increasing crude oil prices on international platforms and the economic recovery were the main reasons for its higher demand.

"The latest US heating oil demand forecast shows that demand is expected to be 10.5 per cent above normal, which can push prices up in the medium term. We expect this trend to continue, which should counter most bullish moves in products, especially gasoline," adds Gandhi.

Gasoline prices also surged around 12 per cent in 2010 due to firm crude oil prices, strong demand from Saudi Arabia and Iran, along with hopes of higher exports of the motor fuel to the US.

Gasoline prices have been tracking crude oil prices and have recorded a two-year high at $2.98 per gallon, with crude oil prices crossing $100 per barrel on account of unusually cold weather in Europe and the US.

Gasoline prices generally rise in summers and drop in winter. However, 2010 was an exception. This can mainly be attributed to expectation of strong recovery in global demand, particularly from developing countries.

"Strong global recovery is expected in 2011, which will increase the risk appetite among investors. This coupled with the containment of the European crisis may push gasoline prices to an alltime high in 2011. Gasoline prices are expected to average $3.17 a gallon in 2011, 5.7 per cent higher than the average price of $3 a gallon in December 2010 and 37 cents higher than the previous year's average price," says Dey. 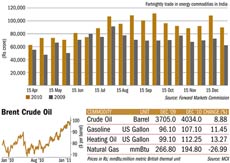 Though natural gas was one of the worst performers of 2010, experts are bullish on the commodity for the next six months and expect it to give 12-15 per cent return in the near term.

"Looking at the rally in crude oil, we believe there's a lot of potential for its price to move up," says Kunal Shah, head of commodities research at Nirmal Bang Securities. Natural gas declined 27 per cent in 2010 due to oversupply from the US and Russia, the world's two largest natural gas producers.

Gas production in the US in the past year was highest in around 40 years due to rise in shale gas production. In 2010, 961 natural gas rigs were drilled in the US, an increase of 28 per cent from a year ago, according to oilfield services firm Baker Hughes.

Production in Russia, the world's largest gas producer, grew 5.4 per cent in November to 1.98 billion cubic metres per day. "The outlook for 2011 is bullish. Due to the La Nina, the winter season in the US is more severe and demand for natural gas in northeastern US, which is the largest heating oil market, may shoot up," Shah added.

With equity markets expected to remain volatile with a bearish tilt in the current year, investors should look at diversifying their portfolios in these energy commodities. This strategy can be a good investment bet for high inflation-adjusted returns in 2011.