Gold has defied a cardinal market rule, the one that reassures that dips and rises are inevitable and normal. However, for the tenth consecutive year, gold prices have risen. Many call it speculation, while others believe in its fundamental story. Although gold's long-term supply and demand dynamics have ensured it remains a sought after asset, there have been several other factors that have lent support to its price growth.

The global financial crisis in 2008, followed by the concerns about growth in developed countries, especially among European nations, led to investors going for risk aversion. Amar Singh Deo, head, Commodities and Currencies Research, Aditya Birla Money, says: "Currencies, once considered a safe avenue, took a major hit. Equity markets lost a lot of their value and investor confidence was shaken. During this time gold seemed the safest bet from a long term perspective."

Simultaneously, the dollar took a major hit, which benefited gold owing to its inverse relationship with the greenback. "Further, the price of gold has also been driven by huge liquidity infused into the system by many governments, including the US, UK and Japan to combat the downturn," says Naveen Mathur, associate director, Commodities & Currencies, Angel Broking.

Avinash Gorakshakar of Edelweiss Financial Advisors says, "Gold is further deriving support from the political uncertainty across the Middle East and the North African region, the events in Japan and fears of rising inflation." Gold's low volatility and lack of correlation to other assets makes it desirable in times of uncertainty as a risk management strategy.

IS THERE REAL DEMAND?

"Despite the rise in the price of gold, gold jewellery growth has surged by 17% and global demand reached a decade high in tonnage," says Aurobinda Prasad, head, Research, Karvy Comtrade. India's insatiable demand for the metal rose by 70% in 2010 compared with the previous year. "With central banks becoming net buyers of gold, it is likely that the demand for the metal will continue," says Deo. 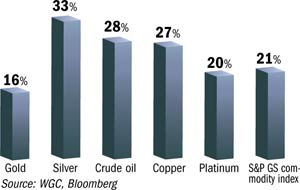 Annualised Daily Volatility
According to Deo, silver is being seen as a substitute for gold and many have started shifting since gold saw a sharp move from Rs 6,000 per 10 grams in 2005 to Rs 21,000 now. The demand for silver jewellery and fabrication as a replacement has also gone up, he adds. Further, being in the bullion category, gold's status as a safe haven has rubbed off on silver.

Since silver is both a precious metal and an industrial metal, the rally in prices of both types of commodities, i.e. precious metals and base metals, has added to its run up, says Mathur.

A sharp upmove in silver prices has been witnessed since mid 2010, when the metal returned about 75%, and this year it has already gained another 40%. A huge surge in investment demand for silver, particularly in the fourth quarter, led to this stupendous gain. The consistent increase in the holdings of silver coincides with the increase in its price, says Atul Shah, head commodities at Emkay Global

WHICH METAL WILL SHINE MORE?

Gold and dollar typically have an inverse relationship, though aberrations such as the one in 2010 are sometimes seen
Although fundamental factors do remain bullish for silver, considering the recovery in the US and Europe would lead to an increase in industrial demand, Deo says he would not put money on silver at current levels as it has already moved up 40% this year. One can see silver move towards $40-45 in the near term, he adds. According to analysts, silver is vulnerable to a correction if large quantities of the metal are returned to the market.

Further, silver is more volatile than gold. During crisis years, such as 2008, gold outperformed silver, while silver was more volatile as the drag from an industrial slowdown offsets its investment demand. However, during recovery periods, such as the current one, silver tends to outperform gold as industries pick up and investments pour in. Year to date, gold's performance has been somewhat lacklustre compared to its counterpart. Also, experts feel that the well received US economic data could bring back investor interest in riskier assets such as stocks.

On the contrary, Prasad opines that high unemployment levels in the US may keep investors out of riskier assets. Further, to counter a likely widening budget deficit, higher tax rate may be imposed, which will leave investors with less money to invest in riskier assets, he adds.

According to Suresh Dhruv, Director of Bangalore Refinery, the increase in the price of gold is not led by demand but more to do with low interest rates in countries such as the US and Japan, along with the current financial uncertainty. Since the chances of immediate improvement of the financial situation is unlikely, we feel there is more scope for price rise, he adds. Analysts expect gold to trade, in rupee terms, in the range of Rs 20,000 to Rs 22,000 per 10 grams.

Oil has shot up dramatically in the last few months due to the recent political unrest in Egypt and Libya, combined with the earthquake in Japan. It is also a major driver of gold and silver prices. When crude prices show a sustainable rise, they have an impact of increasing the price index for any importing or consuming nation, thus having a bearing on inflation.

According to Shah of Emkay, higher crude oil prices could slow down the US economic recovery since it is the largest importer of crude oil and thereby further weaken the dollar. It would also affect other emerging economies, such as India and China-meaning slower demand and lower exports. Overall, the uncertain economic outlook would only induce investors to look for protective assets for diversification. Hence gold and silver prices would also tend to rise.

Gold and crude oil prices tend to rise and fall in sympathy with one another. Historically, oil purchases were paid for in gold. Even today, a sizeable percentage of oil revenue ends up being invested in gold. As oil prices rise, much of the increased revenue is invested as it is surplus, adds Shah. Besides, rising crude price places upward pressure on inflation. This will again enhance the appeal of gold as a safety option.

Silver has outperformed gold - delivering 109% since 2010 compared with a return of 25% delivered by gold.
WILL THIS BE SUSTAINED?

Having seen the rally in 2008, and the subsequent fall, one wonders whether oil will follow the same fate this time around. Perhaps not, say analysts, who believe that this tim eits different. The previous rally was driven by excess of liquidity, a weaker US dollar and booming demand from China, along with speculative positions.

However the fundamentals of demand and supply did not warrant such a dramatic rise in crude prices, suggest analysts. This time around, "there are more supply issues, which could result in large demand-supply imbalances in the long term", says Shah.

For instance, Libya, an OPEC member country, was responsible for crude supplies to major European countries, such as Italy and Germany. The civil unrest in Libya has disrupted crude supplies to these countries. Since, Saudi Arabia is the only other OPEC member having spare capacity, it has to pump more oil to meet the supply deficit. As the global economic recovery gains momentum, crude oil demand is only likely to improve, adds Shah.

In 2008, crude and silver were among the biggest losers whereas gold held on to its resilience.
Earlier analysts had pegged the lower band for crude price in the region of $60 to $80, which has now been raised to $90 to $100. According to Mathur of Angel Broking, if crude crosses a level of $120 to $125, it may touch $140- which we have seen in the past.

According to Basant Vaid, senior research analyst, Bonanza Commodity Brokers, the tensions in Libya itself have made oil prices surge sharply. If the problems spread to Saudi Arabia, which contributes 40% of the total global production, it has the ability to send crude prices to new highs.

All in all, inspite of prices moving up, we could still see a demand for these commodities. Analysts say that precious metals such as gold and silver do warrant an allocation in your portfolio of up to 10%. Considering the high prices and the expectation of a correction in the offing, the risk-reward ratio may not be too high if investors invest now. One could look at investing on a 10-15% correction from current levels and a staggered approach may be best at the current juncture.

Before investing in any of these commodities, watch out how the Middles East tensions pans out. This could lead to soaring crude oil prices, which would be inflationary and will benefit the price of gold. The movement of the global interest rates is also imperative. The European Central Bank (ECB) could be increasing interest rates soon to calm down inflation, which has taken precedence over growth. We could see banks withdrawing money. The Federal Reserve won't be too far away then, which could put some pressure on liquidity. The resurfacing of the European debt crisis will also make gold a good proposition, says Vaid.

Gearing towards a strong base