Finding a health cover when you fall in the high-risk category can be daunting. We try to find the best solutions
Chandralekha Mukerji | Print Edition: July 2013

Buying health insurance is difficult. The problem is compounded if you fall in the high-risk category. What can you do in such a case? We look at a few such complex situations and find the best possible way out of them.

Pankaj Kumar Biswal, 32, from Patna, a chain smoker, did not know that smoking increased health insurance premiums. He compared a few plans online and selected a policy offered by a private insurer. 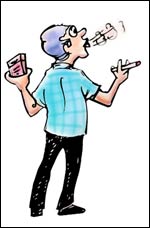 However, when he got in touch with an online brokerage, he was told that the policy he had chosen took into account smoking habits, which meant he would have to go for a medical test and bear an additional charge on the basic premium. Or, he can buy from standalone insurers such as Star Health, Religare Health and Apollo Munich, all of which will not press for medical tests even if he ticks on the smoker category in the customer information form; these plans may be more expensive, though.

"Not all health insurers have stringent guidelines for smokers and alcoholics. Their focus is on assessing whether the proposer suffers from any severe medical condition. If not, he is covered," says Yashish Dahiya, founder and CEO, Policybazaar.com.

But no matter who the insurer is, you must tell the whole truth, even if you have quit (as the effects of smoking take years to go away). This is because if you fall ill, and medical tests show smoking as the reason, the insurer will have a very strong case if it rejects your claim.

Insurers will also take into consideration parameters such as the frequency and quantity of tobacco use, manner of consumption (for example, smoking or chewing tobacco) and the period of addiction.

In some cases, if the applicant decides to quit smoking, the insurer may not charge extra and treat him as a non-user after a few years. However, if the reason for quitting is a medical condition, the insurer will be wary.

"We advise people to go for a medical check-up while buying a policy to avoid problems during claims.

Biswal wanted to skip it, but we insisted," says Dahiya. He was also advised to buy a critical illness plan for ailments associated with smoking.

Since Biswal is still young and has not been diagnosed with any chronic illness yet, buying a cover was not very difficult for him. Like many, Rakesh Sharma, 41, a Mumbai-based computer engineer, did not think about buying health insurance until he was diagnosed with hypertension or high blood pressure. By this time, his options had shrunk. Insurers whose policies where priced low either refused to cover Sharma or offered plans that did not cover hypertension and related conditions. For Sharma, the latter were useless. Most plans offered to him were priced slightly higher and had a waiting period of three-four years for pre-existing ailments. The plans which covered his condition from day one had prohibitive premiums.

Being the family's only earning member with five dependents- wife, two children and aged parents- his resources were limited. He had group mediclaim policy of Rs 1 lakh from his employer and some savings. These were not sufficient.

"If his condition wasn't immediately covered, a medical emergency would have meant a financial disaster for the family," says Sunil Mishra, CEO, Karvy Private Wealth, that Sharma consulted.

Karvy zeroed in on a plan with a three-year waiting and as an interim solution advised Sharma to buy a critical illness cover. "Hypertension can damage heart, brain, kidneys and eyes. Hence, a critical illnesses cover, even at a high premium, was absolutely necessary," says Mishra.

Sharma was lucky that his condition was considered less risky than other critical illnesses. "Sharma's case is simpler than that of a person with a heart ailment or diabetes. We have had cases where diabetes and cardiac patients were refused cover while hypertension cases were insured with some loading," says S K Sethi, chief executive officer, Ria Insurance Brokers.

Some insurers offer dedicated covers, for instance Star Health's Cardiac Care and Diabetes Safe, which insure people with a medical condition. However, these usually come with restrictions; the policy wordings, too, are complicated.

A Plan for Parents

To cut costs, many employers have of late either capped benefits on coverage of parents or withdrawn the facility. If the sum insured of the group cover seems a little less, add a top-up plan with lifetime renewal. A top-up health policy is an add-on cover for people who have an individual plan or a mediclaim from the employer. While a regular indemnity policy reimburses hospital bills up to the sum insured, a top-up plan covers costs after a certain threshold (deductible) is reached and is therefore cheaper than an indemnity plans. It is for reimbursement of expenditure which arises out of single illness beyond the limit of the existing hospital cover. Since the deductibles are high, a top-up plan is much cheaper than an indemnity policy with similar benefits. For instance, Apollo Munich's OptimaPlus plan for a 65-year-old with a sum insured of Rs 5 lakh and a deductible limit of Rs 2 lakh will cost Rs 5,704, while a regular indemnity plan from the same insurer will cost Rs 32,809.

Some companies cover parents under family floater policies; this is cheaper than standalone senior citizen policies. However, family floater means the whole family will share the kitty. "For a young person, adding parents in the family floater policy makes sense. But after 45, when you yourself are in the risk zone, sharing the kitty with elderly parents is risky. Unless you have a cover of, say, Rs 10 lakh and more, in a particular year, the sum insured may not be sufficient," says Sudhir Sarnobat, CEO, Medimanage Insurance Broking.

However, there is always the risk of the company changing its policy or you changing your job. So, it is wise to get parents an individual cover as well, even if it comes at a price and with contracted benefits, sub-limits and co-pays (ranging between 10% and 25%).

You don't have to pay a bomb if you buy intelligently. Suppose your parents need a Rs 8 lakh cover. You can keep the sum insured of the base plan low, say, Rs 2 or Rs 3 lakh (it will cost around Rs 15,000 annually for a 70-year old). And, add a top-up plan of another Rs 5 lakh with a deductible equal to or less than the sum insured of your base plan (it will cost Rs 6,000) and/or a comprehensive critical illness policy such as Tata AIG's Wellsurance or Aegon Religare's iHealth, which, apart from covering major ailments, also provide lump-sum benefits for a large number of surgeries.

DEDICATED COVERS
These insure people with a medical condition but come with restrictions and convoluted policy wordings.

It is better to buy the add-on plan early. Sobhanjeet Rath, 30, from Dehradun bought a cover of Rs 3 lakh for his parents. But when his father had to undergo a treatment for artillery blockage, it was not sufficient to take care of all the expenses. Rath realised he needed to upgrade to a bigger cover.

"Renewing a policy with a higher sum insured after a claim year is difficult, especially if you are above 45 years old," says Dahiya of Policybazaar.com. Even if the insurer accepts your request, you will have to go through a thorough medical examination again; premium and loading may also go up.

"We suggested a top-up plan of Rs 10 lakh from Star Health for Rath's parents. The deductible threshold was kept at Rs 3 lakh. So, when the base cover (of Rs 3 lakh) is exhausted, the add-on will kick in," says Dahiya. If Rath had taken this decision earlier, he would have got a cheaper deal. Now that his father has undergone a treatment, the insurer will underwrite the policy at a higher cost. Also, now, the pre-existing conditions will be covered only after three continuous policy years.

And the most efficient wealth creators of FY13 are...