Struck by the slowdown, those in the 25-35-year age group have shown surprising resilience. These children of good times have restrategised their finances so well that all investors can learn from them.

They say that the way one faces a major crisis is the measure of one's character. If the savants are right, those in the age bracket of 25-35 years have nerves of steel. They haven't balked at the first economic slowdown of their careers. Instead, they are restrategising toward the goal of wealth creation. It is a bold decision, considering what is at stake.

Before 2008, they were the envied lot. They hopped from one high-paying job to another, splurged with trademark flamboyance and invested early to build a nest egg. It was to be the time of consolidation. The zeros were supposed to add up in their equity portfolios, promotions were to push them to high-flying positions, salary packets were expected to get fatter and they were to stay in dream houses.

Obviously, it hasn't turned out that way. The challenges for this age group are as novel as the opportunities were. New jobs are rare to find. Old salaries are even rarer. For those already in the workforce, job insecurity is at an unprecedented high at a time when they were poised to jump high on the corporate ladder. The risks taken during the boom time are threatening to be nullified. The lifestyle backed by scorching salaries is set to vanish. This gamut of problems is accentuated by the nearly-finalised personal plans such as marriage, starting a family or shifting to a bigger house.

Unique problems must have equally unique solutions, which is true of this generation too. It is not good news as this means they cannot emulate their parents' strategy and park money in safe havens till the gloomy clouds roll away. Neither do they have a sizeable corpus. Those in the 25-35 age group can't afford to behave like their younger colleagues, who can easily postpone investing decisions or bet on risky instruments. More importantly, they have no option but to seek more investment opportunities.

So, the fact that many 30-somethings have found appropriate strategies is remarkable. We decided to bring them to you through the minds that have formed the plans. In the next few pages you will read how young families have reduced expenses without compromising on lifestyle, invested in equities with a generous dose of debt for security, and hunted out alternative employment avenues when regular jobs are scarce. We have added our bit, but the fine-tuning is minor.

It's still too early to make a final judgement, but the children of the good times seem to have mastered the bad times too. 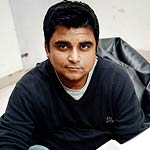 "Now I am more conscious of the risk-reward ratio of financial products. This is why I have moved from mid-cap funds, which are more risky, to large-cap ones."

Onus is on the parents

Innovating to stay ahead