Invest in a house, cautiously

Buying a second house in anticipation of a good return might be a risky proposition if you fail to pick the right property or have a short-term view.

The rising value of your stock and fund portfolio, soaring gold holdings and a hike in salary have left you a neat cushion after taking care of your monthly budget and a home loan EMI. What do you do with it? Perhaps invest in a second residential property.

With the compelling advertisements and flood of SMSes promising property deals like never before, it's hard to resist the temptation to go scouting for one, if only to flip it in due course, hoping that a price appreciation will make you pocket a neat sum.

In case you are planning to buy property as pure investment, you would do well to steer clear of R.V. Verma, chairman and managing director, National Housing Bank (NHB), for he is sure to give you a glance of disapproval.

"The investor market psyche is very different. It is risky, unstable and speculative. If you are taking a loan for a house meant as an investment, it can be even more risky. While interest rates can go up, property prices may fall. Unless the buyer has an appetite for this kind of risk, it is not really worth it," says the head of the housing finance regulator.

However, Verma is quick to add that the final decision rests with the individual concerned. "Of course, buying property is a right. If you have the money, you can buy any number of houses," he says. We will add the standard caveat that if you are looking to buy a residential property as an end-user, you should go ahead and seal the best deal available, since a wait for a correction can be endless.

The Reserve Bank of India (RBI) has already expressed concern over the rising asset prices in India. "Here, as in many other emerging market economies, asset prices have risen sharply. The equity market is close to its previous alltime peak. Residential property prices in metros have risen beyond the pre-crisis peak.

Gold prices are ruling at an all-time high. Although the income levels of households and earnings of corporates in India have continued to rise, a sharp hike in asset prices in such a short time causes concern," the RBI said in its recent monetary policy. From his current perch, Verma has a 360-degree view of the housing sector, and is also a worried man.

"We (NHB) are concerned when prices rise abnormally. Of late, it has been happening in the real estate market, in the middle- and top-end segments," he says. As a quintessential regulator, Verma is inevitably cautious and conservative. But he has support. Kavi Arora, CEO, Religare Finvest, also advises caution. "The sudden rise in the property market has led to over-valuation. Hence, investors should think twice before going for an aggressive investment for the short term."

"As we move into 2011, residential supply across major cities is scoring over the prevalent demand. This supply influx is limited to a particular pricing segment (usually the Rs 30-50 lakh category), wherein the end-user response might have lowered in the past few months. Hence, a majority of the investment in this housing stratum is by the investor community. Caution needs to be exercised as investment-led speculation and profit-led property resale can have adverse consequences on the overall market performance in 2011," says Magazine.

Datta seconds Magazine. "Investment in housing should always be considered a long-term investment, which could be anywhere between three and five years," he says. Datta identifies cities like Ahmedabad, Surat, Jaipur, Chandigarh and Patna as some of the emerging locations with potential to provide good returns.

Sumeet Vaid, founder and CEO, Freedom Financial Planners, feels that those willing to stick it out for long might make a neat pile if investment is made in the right places.

"Non-metros and cities close to these have a lot of juice if you have a long-term horizon. There is a potential gold mine in places such as Nashik (near Mumbai), which is emerging as a very good investment destination. But one has to be aware about the erratic nature of returns in these markets," he says.

Vaid adds that the price rise in the housing sector is location-specific. "Price rise cannot be generalised. It should be viewed on a segmented basis. For example, the premium housing segment in Mumbai and Delhi is inflated, though affordable housing, especially on the periphery of Delhi, is not. Bengaluru, Chennai and Hyderabad have started easing up as many builders are facing a fund crunch. There is also a fear of glut and delay in projects," he says.

Magazine has a similar view. "It can be argued that property prices are on the rise in many parts of the country, but there is a basic difference. In small cities, houses are being bought on need basis (driven by end-user demand), as against metros and big cities, where they are being bought for speculative reasons," he says.

Despite prices in some pockets showing signs of inflation, there appears to be a consensus that not much correction is in sight in the immediate future.

"There is an artificial inflation around property prices in most Indian cities, but I am not predicting any meaningful correction in 2011. In fact, the movement of property prices in India has never been governed by market forces. At Makaan.com, we are predicting the property prices to remain stable (with a slight negative bias) in the first half of 2011. This trend may reverse in the second half of the financial year. Homebuyers can use the first six months to make an investment decision," says Aditya Verma, chief operating officer of the property portal.

Datta feels that the correction, if any, might be limited to the premium segment. "The demand for midrange and affordable housing is strong," he says.

Other than location-specific correction, easing of prices might also vary from builder to builder. "In Mumbai, it has been seen that builders with good financial backgrounds are able to hold on to their prices during the correction phase. In other words, for good returns, hunt for fund-starved builders, but beware of the associated risks," says Vaid. 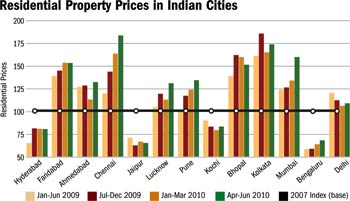 According to Verma, there needs to be a planned approach to developing residential clusters. "A good alternative will have to have a good balance of retail, residential and commercial activity. Most new, so-called property hotspots are 15-20 km away from the main city, with little or no infrastructure development. People are investing in such places in anticipation of an improvement in infrastructure. If these expectations are not met, the appreciation will be very little," adds Verma.

He, however, is optimistic about the long term. "In the past two decades, investment in real estate has given higher returns compared with any other asset class. With the huge demand-supply mismatch in the Indian housing sector, the trend is likely to continue," he says. Those who sew up property deals in 2011 will hope that Verma's reading comes true.