Investing in government companies is often considered safe. However, investor experience has not been uniform. For instance, the Coal India initial public offer was hugely profitable for retail investors, while investors in NMDC's follow-on offer lost money.

The right price will imply a discount to the market price. In case of unlisted PSUs, comparison with peer firms will be relevant

Since there have been many instances where government issues have failed to give retail investors capital appreciation, investors need to think before putting money in the upcoming PSU offerings.

We give you some broad parameters to be kept in mind while investing in these offers.

ISSUE PRICE
The pricing of the shares is important. "Multiple factors decide the appropriateness of the offer price. In case of listed PSUs, the right price will imply a reasonable discount to the current market price. In the PSU in question is unlisted, price comparison with peer companies will be relevant," says Sudip Bandyopadhyay, managing director and chief executive officer, Destimoney Securities.

"I think for investors what is important is the level of discount to the market price," says Dara Kalyaniwala, vice president, investment banking, Prabhudas Lilladher. However, one should also check the share price before the offering is made.

If the price has run up significantly just before the offering and investors are offered a discount on the rallied price, it will be difficult for them to make money. "I would hazard a guess and say 10-15% would be the type of discount that would attract retail investors" says Kalyaniwala of Prabhudas Lilladher.

Let's look at the disinvestment stocks. 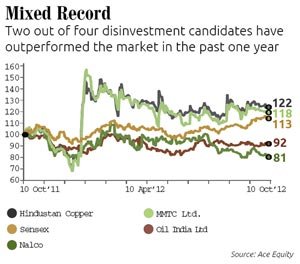 Click here to Enlarge
It's an oil exploration and production company. "Retail investors have nothing to fear if they want to invest in Oil India with a long-term objective," says SP Tulsiyan, an independent stock analyst.

"Oil India looks attractive. Apart from being a wellrun PSU, the oil and gas sector looks poised for a re-rating once the policies pertaining to pricing and subsidy are streamlined. There are strong expectations of a viable solution emerging in the near future," says Bandyopadhyay.

Experts feel the company is fairly valued at the current market price. The stock was at Rs 484 on October 10.

Nalco -
This producer and exporter of alumina and aluminium has the largest integrated aluminium complex in Asia. "It has own mining plant and no debt. It's an excellent company," says Tulsiyan. The stock was at Rs 50 on October 10. It is reasonably valued, says Tulsiyan.

However, in view of falling commodity prices and demand from China, the largest consumer of copper and aluminium, the stock is not recommended at this stage, says Bandyopadhyay of Destimoney Securities. One should not look to make short-term gains from the offer, say experts.

Hindustan Copper -
It is a producer of primary copper. "Hindustan Copper is an excellent company. It is the only company in India which has its own copper mine. But there is an element of overvaluation in the stock. I won't value it at more than Rs 150," says Tulsiyan. He says the stock is trading at a premium due to low float (number of shares in the market).

According to the shareholding pattern of June 2012, only 0.4% shares are with retail investors and 0.04% are with financial institutions. The government holds a 99.59% stake in the company.

Other experts also do not recommend Hindustan Copper given that the sector is in turmoil due to softening demand and prices.

"MMTC is an attractive buy, being predominantly a trading company with a strong record," says Bandyopadhyay. The company has a track record of profitability.

Tulsiyan disagrees, "MMTC's fair value is not more than Rs 75. The stock has an EPS (earning per share) of less than Re 1 and face value of Re 1. It is trading at Rs 750. Even Hindustan Unilever trades at a price-toearning ratio of 40."