Living on a shoestring

Rising costs and expenses and diminishing returns are forcing families to live on tight budgets and come up with innovative ways to save.

>Hanging by a threat
>The unthinking borrower
>7 investment truths
>Following in the market’s footsteps
>Mirror the index, not the fund
>India’s most wanted stocks
>My experiments with a job loss
>Time to adapt or perish
>Can you bank on funds?
>Time to get back to basics
>Small is risky, but can be profitable
>5 value stocks going cheap 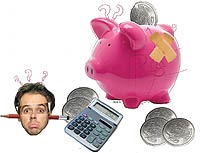 The Hundi family has been facing difficult times. Not that they are bankrupt, or even close to it. It’s just that several little luxuries they once took for granted are now getting out of reach. “At least once a month, we would enjoy a film at a multiplex, followed by a dinner; the entire experience cost over Rs 1,000. But this is a luxury I can’t afford any more,” says Ghaziabad-based Sudhir Hundi. Welcome to the world of thrifty living in times of uncertainty.

Budgeting for yourself may be hard, but wait until two pairs of hands start reaching for the same wallet. It’s worse when you consider that the wallet might contain even less than it did when you were single. Sadly, most of us do not give a thought to budgets or financial plans till we suddenly realise that we are short of funds. “We both earn and have no dependants, yet rising costs have made us keep track of money flows in the past year-and-a-half,” says Pune-based Animesh Topno. He should know. His monthly home loan outgo has increased by Rs 2,500 and the rising cost of living has reduced his spending power. “We’ve cut down on eating out,” he says.

But these are tough times, and making a budget seems the least one can do to get through. The first step is to prioritise expenses. “After you make a list of what has to be necessarily paid out of the family budget, you can dedicate the remaining portion to your luxury expenditures,” says Jayant Pai, Mumbai-based financial planner. Expenses such as rent, utility and phone bills, and school and college fees cannot be ignored. Variable optional expenses, however, can be deferred or even done away with. Economise on entertainment, clothing, miscellaneous expenses, gifts and the like.

Hundi started buying from wholesalers when he realised his grocery bills were shooting up with no noticeable change in the family’s buying pattern. At around the same time, his kids’ school raised the fees as well as the transport charge. “The school had its reasons for doing so. The price of fuel had gone up and the management expenses must have too,” says Hundi. But it also meant that his own expenses went up. So, apart from buying from cheaper outlets, Hundi had to curtail his spending. “I stopped using the car,” he says.

“Just as one adapts to living with the extra money and, more often than not, spends it indiscriminately, the simple answer now is to live below your means,” advises Pai. Of course, this is easier said than done, but people are being forced to see the wisdom of these words now. Topno, for one, is taking this seriously. He has been cutting down on impulsive shopping sprees and weekend breaks. “Trying to live up to society’s expectations will ruin our goal towards achieving financial freedom,” he says. The wisdom of making a shopping list is back in vogue, and more families are realising the value of sticking to the list. Pai also suggests that families keep aside at least three months salary as an emergency fund. “I treat savings as a bill or a debt which must be paid as soon as possible. However, I find myself dipping into my savings sometimes when things are tough,” says Hundi.

According to financial planners, a family should pay less than 20% for housing, 20% to service debts, and 10% should be saved. With 50% of your income gone, the options left to manage the rest of the household expenses is a daunting task. “Now that my car loan has come to an end, it will ease some problems and we can think of reducing the tenure of the home loan,” says Topno. He had taken a 20-year home loan, but has now realised that it comes at a high cost. He plans to use the money that had gone to repay the car loan to increase his EMI payments.

What about savings? “Earlier, I was able to put in about 15% of my income in tax-savers and other long-term investments,” says Hundi, who has hurriedly moved to FDs and small savings as he is afraid of his capital getting eroded in other instruments.

Reduction in spending, postponing of luxuries and smallsavings, and involving all family members in saving tactics are some of the best strategies for accumulating wealth when the rupee is tight. Reduction of spending is essential to any saving endeavour. But, as Pai says, “Be thrifty, but not at the cost of being foolish on missing out the good things in life.”

— With inputs from R. Sree Ram

When Chandrayaan took off, the country celebrated with enthusiasm and pride. However, when prices followed suit, there was gloom all around. I’m not talking of just one product. That we could do without. But what if the prices of vegetables, fruits, edible oil, fuel as well as the EMIs go up all at once? We have a problem, right?

Planning is for the long term and this kind of a temporary hitch is accounted for over a period of time. In the worst case, you can have annual reviews and action can be taken if the plan is falling apart. For instance, the current home loan situation would have been better for those who have gone for a fixed interest loan. In many cases, the interest can be reset every two-three years if the rates continue to be high.

Here are a few suggestions to help bring down expenses:

• Check discretionary spends as on entertainment and vacations.
• Look out for bargains. Sensing the mood, the retail industry has come up with offers galore which can help in pruning expenses.
• Postpone expenses like buying or upgrading your car, renovating the house or buying a computer.
• Weed out wasteful activities. Combine trips to the market with other errands so that money on conveyance can be saved; use public transport, wherever available.
• Re-look your mobile, cable and landline plans. See, if you have the best possible plan as per your usage.

My experiments with a job loss