The past one year was a test of character for mutual fund managers as they struggled to balance objectives of their schemes and aspirations of investors amid market upheaval.

Some did exceptionally well by cruising along the path laid down by their fund houses. The fact that they did not have the luxury of acting outside the in-house fund management rules and scheme objectives made their job tougher.

To give you the view from the other side, we interviewed some of country's finest fund managers whose funds are among the Top 10 in their respective categories and asked not just about their style and strategies but also the reasons for being bullish on some sectors, exposure to stocks with specific market caps and their view of what the markets hold for investors.

We also asked how they managed to keep losses in check and beat their benchmark indices in a turbulent 2011-12.

Fortunately for us, they were fairly open with their responses and eager to explain their strategies for the past three years. 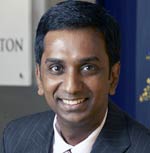 Investment strategy:
Our approach has been to construct a well-diversified portfolio of stocks with a long-term perspective. We continue to hold stocks that fall out of favour if we believe that the fundamentals remain strong. Though growth stocks form a large part of our portfolio, we have also tried to capitalise on emerging opportunities in value/cyclical stocks.

Portfolio construction:
We hold 35-40 stocks. The fund manager strives to maintain adequate diversification across companies and sectors. No single stock is expected to exceed 10 per cent of a portfolio's assets. We do not believe in taking cash calls. We adopt a buy-and-hold strategy and our average holding period tends to be two years.

"We do not invest in stocks which have a daily volume of less than Rs 5.3 crore."
Atul Kumar, Fund Manager, Quantum Long-Term Equity 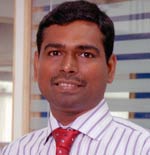 Investment strategy:
The portfolio does not have any sectoral bias. It maintains a multi-cap diversified basket of 25-40 stocks keeping in mind their liquidity. The fund does not invest in stocks which have a daily volume of less than $1 million (Rs 5.3 crore). It is a value-oriented fund and the average holding period of stocks is four-five years.

Top sectoral picks:
The portfolio is overweight on consumer discretionary (four-wheelers, textiles, media, etc). The fund has been focusing on the consumption theme for the past few years, when many other funds focused on the investment/infrastructure theme. The fund recently invested in a few stocks in capital goods and oil & gas sectors where it saw value.

Sectors we stay away from:
We are not comfortable with valuations as well as disclosures in the real estate sector. Pharma sector, which started performing well after 2009-10, looks expensive. Retail is interesting, but stocks in the sector look expensive.

In-house practices/processes:
The fund house does not have any star fund manager. It depends on team work. The research team maintains a database of 100-120 companies whose company management is met once in six months. Forecasts are made on a five-year basis. Thereafter, buy/sell prices are arrived at for each company. Each stock is given a weight of 2-6 per cent at cost or maximum 10 per cent on an NAV basis.

"Our decision to be overweight on FMCG has helped us even out market volatility"
Soumendra Nath Lahiri, Head, Equities, Canara Robeco Mutual Fund 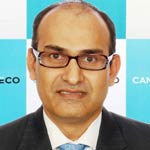 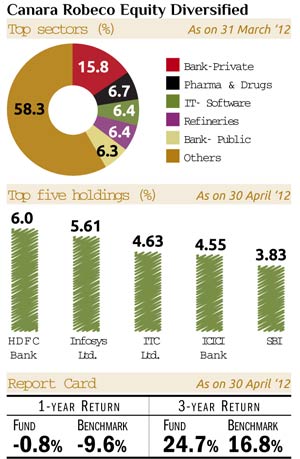 Investment strategy:
The fund was underweight on rate-sensitive sectors such as banking, auto, material and capital goods right through 2010-11. Sticking to companies which have strong operating cash flow and a decent franchise with some pricing power was helpful in view of global uncertainties and rising input costs.

Calls that worked:
We were biased towards consumption and pharma companies which required little capital/debt and generated strong cash flows. The fund steered away from having too many companies that were over-leveraged or expanding. Our decision to be overweight on FMCG and hold Indian pharma companies has helped us even out market volatility.

Contrarian calls:
One contrarian bet was the cement sector, which was attractive as companies expanded capacity without much leverage. Strong balance sheets, slower capacity additions and positive cash flows strengthen belief in this sector.

Sectors under/overweight on:
The fund was overweight on telecom. This was reduced. The reasons were pressure on margins, regulatory risks and requirement of heavy capital in an environment where interest rates were high. The fund has added marginal weight to materials, but this has been volatile considering that stocks in the sector track metal prices rather than fundamentals. 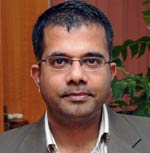 Investment strategy:
We have been following a high-conviction concentrated strategy over the last three years with focus on returns and not as much on risk. For a majority of the portfolio, our stock identification process focuses on absolute returns over three years based on earnings growth, valuation re-rating or a combination of the two.

Mistakes that could have been avoided:
We lost meaningful returns on certain small-cap counters such as TIL, McDowell Holdings and SpiceJet. Not holding ITC also has led to meaningful negative attribution relative to the benchmark.

A relatively higher portfolio turnover ratio (145-150 per cent):
There are two reasons for it. One, we restrict the number of stocks to 25 which necessitates a churn whenever the relative ranking changes or there is an addition. Two, since the portfolio has been heavy on mid- and small-caps, we have been running a large-cap filler to manage liquidity for the overall portfolio.

Any positive in the market:
One can possibly draw consolation from the fact that the Indian market has had an extended bear run which has lowered valuations.

"We do not believe in taking cash calls. Our cash holding is limited to 10%"
Chintan Haria, Senior Fund Manager, ICICI Prudential Mutual Fund 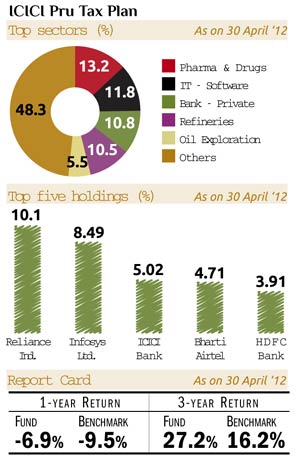 Calls that clicked:
Our overweight stance on pharma and telecom contributed to the fund's performance. Telecom stocks were trading at lower relative valuations in November 2010 when stock markets peaked, while pharmaceutical stocks benefited from valuation re-rating as well as falling rupee.

High small-cap exposure in 2011-12:
Tax-saving funds have a three-year lock-in. The fund aims to achieve a superior risk-adjusted three-year return. It, therefore, has a flexi-cap approach, as we believe that over three years, mid-cap and small-cap stocks have a better return potential.

Reasons for being bullish on oil refiners:
We believe the energy space has been de-rated over the last two years due to its cyclical nature and rising policy uncertainties. We are, therefore, overweight on it given its relative attractive valuation.

Cash and portfolio turnover strategies:
We do not believe in taking cash calls. Our cash holding is limited to 10 per cent, except in funds that have a mandate to hold more cash. ICICI Prudential Dynamic Plan and ICICI Prudential Volatility Advantage Plan.

"We follow a disciplined approach and adhere to the objective of the fund"
Huzaifa Husain, Head, Equities, AIG Investments, India 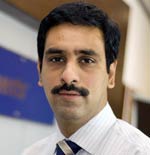 Investment strategy:
It is well understood that the sectors in which the fund invests are prone to cyclicality, subject to delays and heavily regulated. Given that these risks are endemic to the sector, we tend to invest in companies which have little balance-sheet risk. We invest in companies which have operational asset(s) with healthy cash flow, low financial risk and conservative management.

Stocks that helped minimise losses in 2011:
The three stocks which contributed the maximum to the 2011 performance were Petronet LNG, Indraprashta Gas and GMDC.

Mistake that could have been avoided:
We got reasonably comfortable with valuations in late 2011 and started adding "makers of infrastructure" (engineering companies etc) which we thought should benefit as investment spends increase. At the beginning of 2012, business sentiment improved and we felt we were on the right track. But now, in the past two months, the sentiment seems to have reversed and the performance of these stocks has deteriorated. 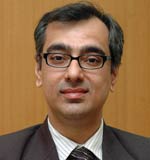 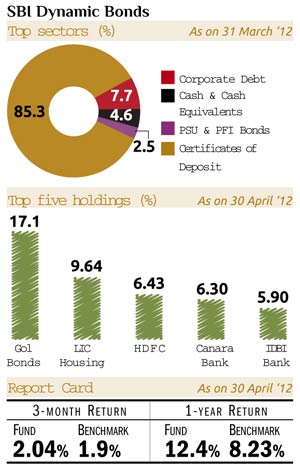 Current investment strategy:
The current positioning of the fund is conservative with around 50 per cent invested in money market instruments and around 35 per cent in two-five year high-quality corporate bonds.

Strategy in last one year:
Considering that interest rates have been volatile, we have invested in the most liquid asset classes that give an opportunity to trade. Double-digit returns have been possible by aggressive churning and asset allocation calls.

Best portfolio call in one year:
Aggressively increased duration in November 2011 as government bonds were expected to outperform other fixed income asset classes. During this time, the 10-year bond was trading around 9 per cent on account of large supply and concerns over slippage in fiscal deficit.