Investors can expect the 2012 stock market rally to continue well into 2013. That's the view from most Indian and foreign brokerages. The Bombay Stock Exchange, or BSE, Sensex is up 24 per cent till December 14. There is now widespread belief that pro-industry decisions by the government, a fall in interest rates and economic recovery, however small, will work their magic on equity markets in the next few quarters.

An ICICI Securities survey in December found that 60 per cent fund managers expected the market to be up 15-20 per cent after a year. In August, only 8 per cent were bullish.

In 2012, till December 14, foreign institutional investors, or FIIs, injected Rs 1.17 lakh crore into Indian equities. In 2011, they were net sellers for Rs 2,714 crore. "We expect FII inflows to be fairly healthy in the coming year due to India's relatively better growth," says Gaurav Dua, head of research, Sharekhan.

Market analysts are positive on retail, media and aviation sectors in which the government allowed more foreign direct investment, or FDI, in September 2012. Some are positive on consumer discretionary companies, which they say may gain from rising incomes.

"With opening up of the multibrand retail to foreign capital, the companies will get high investor interest in the New Year," says Pankaj Pandey, head of research, ICICI Securities. This year till November 30, the Store One Retail India stock had risen 461 per cent to Rs 50, followed by Pantaloon Retail (65.5 per cent to Rs 210) and Shoppers Stop (65 per cent to Rs 428).

MORE FROM THE PACKAGE:How to build and protect wealth in 2013

In the media sector, digitisation will provide opportunities to companies in film, cable distribution and broadcast segments. Cable TV distribution in Delhi, Mumbai, Kolkata and Chennai went digital on October 31. In just one month, the shares of Sun TV, Hathway Cable & Datacom and Zee Entertainment Enterprises rose 24 per cent to Rs 408, 16 per cent to Rs 271 and 3 per cent to Rs 195, respectively.

Consumer sectors, on the other hand, will gain from a rise in the country's per capita income, which has been growing at 12 per cent a year for the past five years. "Education and leisure can do well in 2013. However, retail investors should wait for clarity on the winners as revenue will shift from unorganised to organised players. Some consolidation is also expected in the organised space," says Ravi Shenoy, assistant VP, mid-cap research, Motilal Oswal Securities.

"Stocks of tyre companies could also do well in 2013 as rising automobile production increases demand in the replacement segment," says G Chokkalingam, executive director and chief investment officer, Centrum Wealth Management. Tyre makers could also get a boost from falling rubber prices, which hit a two-year low of Rs 161 per kg in December.

All 13 sector indices have risen in 2012. For the next year, experts are positive on the following-

FMCG: The BSE FMCG, or fast moving consumer goods, index has beaten the Sensex this year by rising 50 per cent till November 30.

"FMCG will remain attractive in 2013, but is unlikely to show the same intensity as it did in 2012. It may rise less than the index as valuations are on the higher side," says VK Vijaykumar of Geojit BNP Paribas Financial Services.

MORE FROM THE PACKAGE:What will drive the stock market in 2013

One can bet on ITC and Godrej Consumer Products, say analysts.

"The company will gain from the agreement for exclusive rights to include the hair extensions business in Kenya and exports to other East Africa geographies in its partnership with the Darling Group," says Shantanu Deb Mookherjea, ED, LSI Financial Services.

ITC: In 2011-12, the company posted a net profit of Rs 6,162 crore, up 23.5 per cent from Rs 4,987 crore in 2010-11. According to a November Deutsche Bank report, the strategy to spread out price increases has worked well for ITC. It has kept earnings in the cigarette business steady in spite of a 21 per cent duty increase. Since September 2011, ITC has increased prices of cigarettes by 23 per cent. Despite this, volumes have held up.

"The performance of private sector banks, which continue to maintain significant growth in profit and keep non-performing assets under control, has also helped. The sector will continue to do well in 2013," says Centrum's Chokkalingam. Any fall in interest rates will reduce banks' NPAs and increase profitability.

MORE FROM THE PACKAGE:Top commodities likely to give good returns in 2013

AUTOMOBILE: The BSE Auto index has risen 34 per cent this year due to better earnings by companies. Experts are positive on the sector. "The next six months will be good for auto stocks as economic downturn is bottoming out and there is revival of consumer sentiment, especially in the car and tractor segments," says Milan Bavishi, head of research, Inventure Growth and Securities.

Maruti Suzuki has risen 57 per cent to Rs 1,473 this year till November 30. Tata Motors, Cummins India and Mahindra & Mahindra are up 49 per cent, 41 per cent and 40 per cent, respectively.

Bavishi is positive on Mahindra and Mahindra, Tata Motors and Bajaj Auto due to their diversified portfolio, wide distribution network and presence in major countries. Investors can expect to earn 15-20 per cent in the next one year from these stocks, he says.

HEALTH CARE: The BSE Healthcare index has risen 35.58 per cent this year till November 30.

"The sector is likely to do well in 2013 due to strong dollar, long pipeline of applications under the Abbreviated New Drug Application (ANDA) route by Indian companies and launch of exclusive products ($12-13 billion worth drugs will go off-patent in 2013)," says Shraddha Shah, research associate, Nirmal Bang Securities. ANDA is an application for US generic drug approval for a licensed drug.

MORE FROM THE PACKAGE:Liquidity may remain tight in 2013

According to an Emkay Global Financial Services report, 31 per cent CAGR in earnings and reduction in net debt to zero will drive re-rating of the Wockhardt stock from 15 times to 18 times 2013-14 earnings. The stock can touch Rs 2,160 in the next few quarters. "The major reasons for the sector's stellar performance in 2012 are optimism about the resumption of capital expenditure and incremental steps being taken by the government to tackle issues in the power sector," says Pezarkar of Daiwa.

Decisions to set up a panel to fast-track big investments and focus on clearing stuck projects have improved sentiments.

Shenoy of Motilal Oswal Securities says, "Most capital goods companies are still trading at affordable levels compared to their earnings potential. The Capital Goods index will continue to do well if the risk appetite remains at elevated levels."

Over the next 6-12 months, Angel Broking is bullish on Crompton Greaves. It said in November that the company was expected to register a healthy 12-14 per cent growth in sales year-on-year on the back of a strong order book. The stock is attractively valued (0.5 times 2013-14 enterprise value/sales compared to the five-year trading range of 0.7-1.6 and the median of 1.2x). It can touch Rs 145 in the next few quarters with a multiple of 0.7 times enterprise value/sales. On December 5, it was at Rs 120. 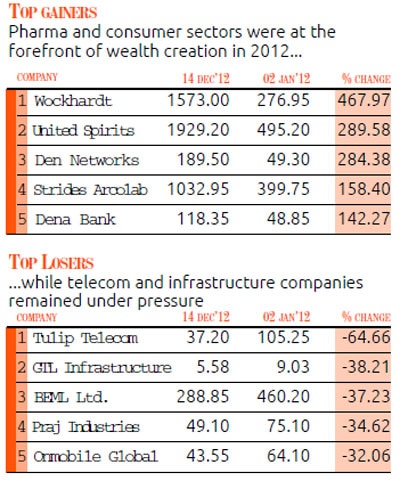 Liquidity may remain tight in 2013

How to build and protect wealth in 2013