Real estate stocks seem set to recover as the sector tries to come out of the slowdown
Rahul Oberoi/Money Today | Print Edition: September 2014 The fortunes of the real estate industry seem to be turning for the better. There are many reasons for this. One, hope of political stability has improved investor/business confidence. Two, the Union budget has given a push to real estate investment trusts, or REITs, and increased tax benefits on housing loans. REITs work like mutual funds. They pool in money from a number of small investors and invest in real estate.

This is amply reflected in prices of real estate stocks. This financial year, till August 4, the Bombay Stock Exchange (BSE) Realty index had risen 30% to 1,893. It was at 1,456 on April 1. The BSE Sensex rose 14% during the period.

"The demand for real estate has risen in the last two months. The demand for housing loans is also up. The fact that this happened in May and June, the traditionally sluggish months, indicates that the industry is poised to see good times," says VK Vijayakumar, investment strategist, Geojit BNP Paribas Financial Services. 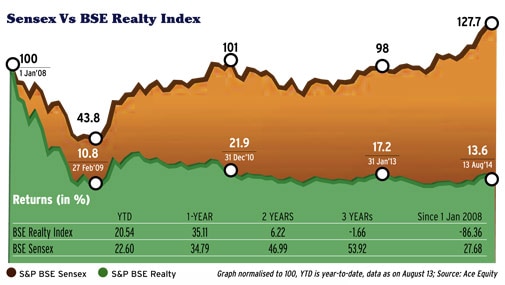 The real estate sector has been facing a slowdown since the end of 2009. The BSE Realty index has fallen over 57% from November 2009 to April this year. One big reason for this is high inflation, which has precluded the possibility of cut in interest rates. Lower interest rates increase demand for houses by encouraging people to take home loans. They also lower builders' borrowing cost.

A lot of positives have emerged for the sector with the new government coming to power. Other than giving incentives to REITs, the government has decided to build 100 smart cities. For this, it has allocated Rs 7,600 crore in the Union Budget. The government has already started the groundworkfor building these cities. According to reports, it has started holding meetings with various stakeholders in this regard. Besides, the Budget has allocated Rs 12,000 crore to the National Housing Board, which regulates housing finance companies, of which Rs 4,000 crore will be for affordable housing.

"The Budget will be beneficial for developers by providing funds and lowering their borrowing cost," says Kamra. 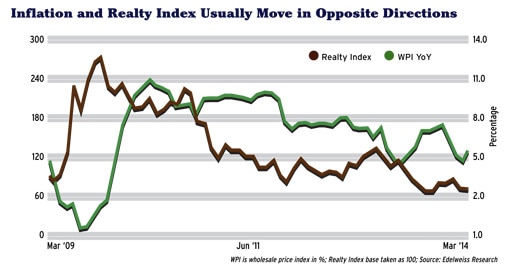 The tax pass-through status to REITS will help investors avoid double taxation. Tax pass-through means that gains from REIT investments will be taxed in the hands of investors. "Also, lower inflation numbers have increased expectations of a rate cut in the next six-nine months, maybe even earlier, which will augur well for the sector. Extra tax benefits for borrowers is positive from the demand perspective," says Kamra.

Factors one must check while investing in a real estate company are its sales volume and balance-sheet strength vis-à-vis operations. Most developers give details of operations on their websites. Consistency in sales, project execution and cash flow generation are the key to evaluating a real estate company.

Aashiesh Agarwaal, vice president, wholesale capital markets, Edelweiss Financial Services, says, "Another useful metric is the net debt-to-EBITDA (operating profit) multiple. Investors can use it to understand the strength of operations compared to the balance sheet. However, investors must keep in mind that real estate accounting is unique and reported EBITDA may not be the most accurate representation of current operations. Finally, most real estate stocks are a play on underlying asset values and, hence, it is important that you buy them at a good discount to their fair value." EBITDA stands for earnings before interest, tax, depreciation and amortisation.

VK Vijayakumar of Geojit BNP says one has to be selective and buy shares of companies that have a proven record, good execution skills and low debt. Land bank, debt, project pipeline and execution skills are the key factors, he says.

The demand for real estate, residential as well as commercial, usually moves in tandem with economic growth. That is why economic slowdown over the past couple of years has hit demand badly. But with new projects being launched unabated, unsold inventory is piling up.

Kamra of WealthRays Securities says, "Poor sales and inventory build-up have created a cash crunch for developers. Banks have become cautious about lending to the sector. This means small developers have to access funds from non-banking finance companies and private equity players at a high cost, sometimes as much as 30%. Even big developers such as DLF have sold land to cut debt."

With inflation not coming down as expected, interest rates have been increased, putting a burden on developers as well as home buyers. This has accentuated the problem of poor demand and high cost. Inflation and Realty index are inversely correlated. Edelweiss estimates 75 basis points cut in interest rates between now and the end of 2015-16. According to the research house, 100 basis points dip in interest rates will boost affordability by 7%, leading to more transactions.

"Despite the recent spurt in prices, valuations of real estate stocks are attractive. One can look at buying at present valuations," says Raina of Edelweiss. On August 4, shares of Anant Raj, Godrej Properties, HDIL, Mahindra Lifespace Developers, Omaxe, Phoenix Mills and Sobha Developers were trading at price-to-earnings (P/E) ratio of 20.72, 36.20, 13.75, 10.66, 39.43, 33.41 and 20.77, respectively. The industry P/E was 30.78 that day. P/E ratio is a valuation measure that shows how much the market is willing to pay for a stock vis a vis the company's earnings per share.

The real estate sector is now in a much better position to ride the economic recovery. Leading developers are sharpening focus on execution (have hired specialised third-party contractors, adopted modern technology), while cutting debt by selling assets and focusing on operating cash flow.

According to an Edelweiss report released in May, over the past four-six quarters, developers have focused relentlessly on debt reduction, largely through asset monetisation. For instance, DLF has sold Rs 7,100 crore worth of assets, while Jaypee Infratech has sold land parcels for Rs 1,600 crore. Purvanakara and Brigade have raised Rs 330 crore and Rs 180 crore, respectively, through this route. Mahindra Lifespace has sold a plot of land for Rs 320 crore and Godrej Properties has raised a total of Rs 700 crore. The sector's debt-equity ratio is now a manageable 0.7.

"We expect 20-25% growth in revenue and net profit in this financial year," says, Raina.

Oberoi Realty: This low-debt company has an edge over others. Its consolidated debt-to-equity ratio stood at 0.02% on March 31. Oberoi Realty has finalised Ritz Carlton as Worli Hotel operator and plans to launch the Worli project, as expected in the first half of 2014-15. It is planning to launch Mulund (3.5 million square feet or msf) and Borivali (3.5 msf) projects in the second half of the financial year. The ticket size for Borivali will be Rs 2 crore per unit. For Mulund, it will be Rs 3 crore per unit.

Kandpal of Karvy Stock Broking says, "Our channel checks with local brokers suggest strong buying interest. These launches shall provide the much-needed visibility on pre-sales. The success of the launch will be a key trigger for re-rating of the stock."

The other key positives for the company are huge land bank, good brand recall and easier access to finance.

"We expect Oberoi Realty to capture market shareoutside its home location and deliver above industry average growth. We value its residential real estate at Rs 161 per share, commercial annuity assets at Rs 111 per share and others at Rs 24 per share. We believe that the near-term catalysts are: (i) Mulund & Worli launch; (ii) success of foray outside Mumbai & (iii) new land acquisition. The stock can touch Rs 296 in the next 12 months," says, Kandpal. On August 4, it was at Rs 252.15. Sobha Developers:The company has proven competence in execution. It has a strong balance sheet and decent land bank in high-growth locations. It has also succeeded in reducing its debt. As on March 2014, its debt-to-equity ratio was 0.61 as against 1.78 in March 2009. Most real estate stocks are a play on underlying asset values and, hence, it is important that you buy them at a good discount to their fair value, says Aashiesh agarwaal, Vice President, Wholesale Capital Markets at Edelweiss Financial Services

Vijayakumar of Geojit BNP Paribas says, "Even though the stock has run up quite a bit, long-term investors can expect 25% annual return over the next two years. It is quoting at 12 times 2015-16 earnings."

Kolte Patil has said that the Sanjivani Township, Urse (near Pune), has got 'locational clearance' for Phase 1, which is a major milestone. The environmental clearance is expected in the July-September quarter. "We are bullish on Kolte Patil. It seems it the stock can touch Rs 245 in the next 24 months," says Kandpal. On August 4, it was at Rs 152.85.

0.7% is the current debt-toequity ratio of real estate companies, which experts say is quite manageable

Even though the stock has doubled from its recent lows, it is attractively priced at 20 times trailing earningsVijayakumar says, "Since it will be reasonable to expect 30 % earnings growth this year, a 25% upside can be expected in the stock in one year." 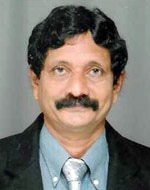 Indiabulls Real Estate: The stock tested Rs 110 in June and is now in the Rs 75-80 range. Karma of WealthRays Securities says, "One can take positions in Indiabulls Real Estate with a target of 15-20% price appreciation. The price correction makes it attractive with the REIT option raising the possibility of lowering of financing costs, which have greatly impacted its performance. The company has also turned its eye abroad by buying a property in Central London."

Best places to buy a house in India right now