Real estate stocks have been falling for quite some time now. We bring some scrips that can give good returns even in this bad market.
Rahul Oberoi/Money Today | Print Edition: September 2013 The lull in the property market seems to be impacting stocks of real estate companies as well. The Bombay Stock Exchange realty index has fallen 44% this year till August 5.

Not a single stock out of 13 in the index has given positive returns this year. Big names such as DLF, Unitech, Indiabulls Real Estate and Oberoi Realty have fallen 45%, 55%, 24% and 42%, respectively, since January.

"The sector has been under pressure due to anaemic flow of credit for quite some time. The recent policy shift by the central bank to defend the rupee will further aggravate the liquidity crisis," says Vikram Dhawan, director, Equentis Capital. In 2010 and 2011, the index had fallen 26% and 52%, respectively. It rose 54% in 2012.

Companies in the sector are battling a fall in sales due to economic slowdown and high interest rates. Approval delays are also impacting new launches. Then there is the issue of high debt that most real estate companies have piled up over the last few years.

According to a report by Liases Foras, a real estate research firm, sales were subdued in the first quarter of 2013-14. It was probably one of the worst quarters in terms of sales, it said. Sales velocity or sale of residential units in new projects per month in the major markets of Bengaluru, Chennai, Hyderabad, Mumbai Metropolitan Region, National Capital Region and Pune remained in the range of 1.12-2.27%. The ideal figure is 2.75%.

On August 6, the price-to-earnings, or PE, ratio of the BSE realty index was 24.14, marginally lower than the three-year average of 25.71. Market experts say though the sector is undervalued, there are many reasons why buying real estate stocks at this stage can burn a hole in your pocket.

"For the industry as a whole, if one looks at valuations, one may get an impression that the stocks are cheap relative to historical valuations. But this is an error of perception. Considering the short- to medium-term prospects of the industry, the stocks are certainly not attractively valued," says VK Vijayakumar, investment strategist, Geojit BNP Paribas Financial Services. 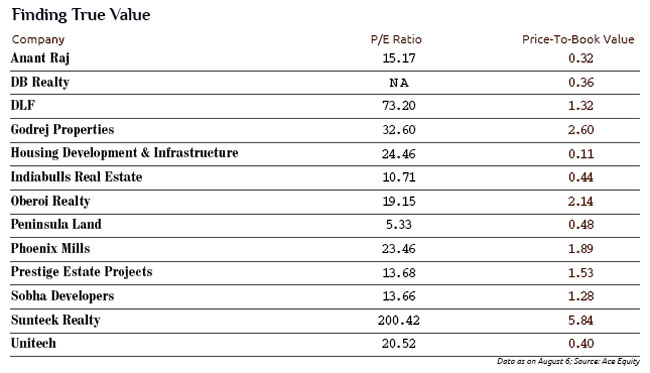 Experts are not very upbeat for 2013-14. Vijayakumar of Geojit BNP Paribas Financial Services says, "Like in 2012-13, real estate companies are likely to remain under pressure in 2013-14 too."

Prakash Diwan, director, Altamount Capital Management, seconds Vijayakumar. "The pressure on bottom lines will continue throughout the current financial year, primarily due to rise in interest costs and lower realisations. Companies with a high proportion of completed projects may be the only ones to report decent profits."

THINGS TO LOOK FOR

If you are planning to invest in a real estate company, you must be careful. Teena Virmani, real estate analyst, Kotak Securities, says, "Project pipeline, land bank, strength of the balance sheet, leverage, execution skills and project approvals must be looked at closely." 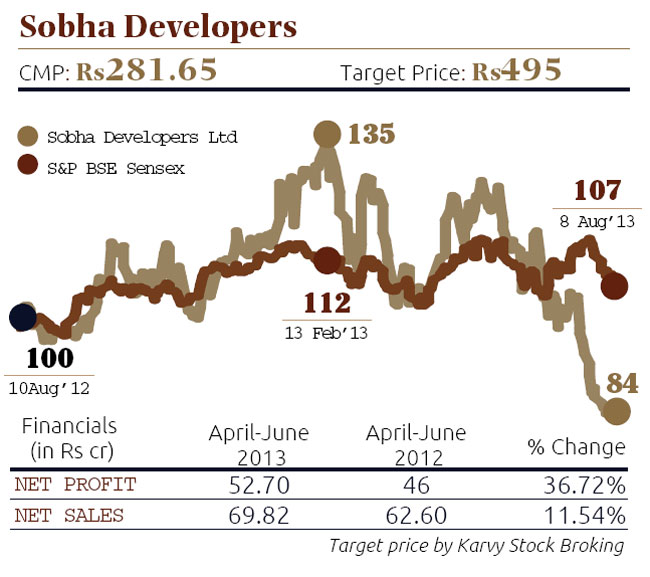 The debt to equity ratio of the company was 0.16 at the end of March 2013 as against 0.18 in the preceding financial year.

Diwan of Altamount Capital Management sees a 25% upside in the stock. "A lot of completed projects in Mumbai and some well-progressing projects in other markets are positive for the company." "Phoenix has emerged as a key beneficiary of the growing demand for retail real estate. The company is on track to launch residential projects, cash flows from which will reduce the overall debt. The stock can touch Rs 293 in the next few quarters," says Virmani of Kotak Securities. Anant Raj Ltd:
The company is a construction and infrastructure player. It is building an array of special economic zones, IT parks, hotels, commercial complexes, malls, residences, serviced apartments and other infrastructure projects. It is also planning to set up an education city at Mehsana in Gujarat.

Kishor P Ostwal, chairman and managing director, CNI Research, says, "Anant Raj has a huge land bank in North India. At present, the book value of the stock is around Rs 130. It is trading at a PE ratio of 14. The stock may trade near Rs 100 in the next few quarters." On August 8, it was at Rs 44.50.

The company was under pressure in the first quarter of 2013-14. It posted a net loss of Rs 35.16 crore as against a profit of Rs 11.21 crore in the corresponding quarter a year ago. 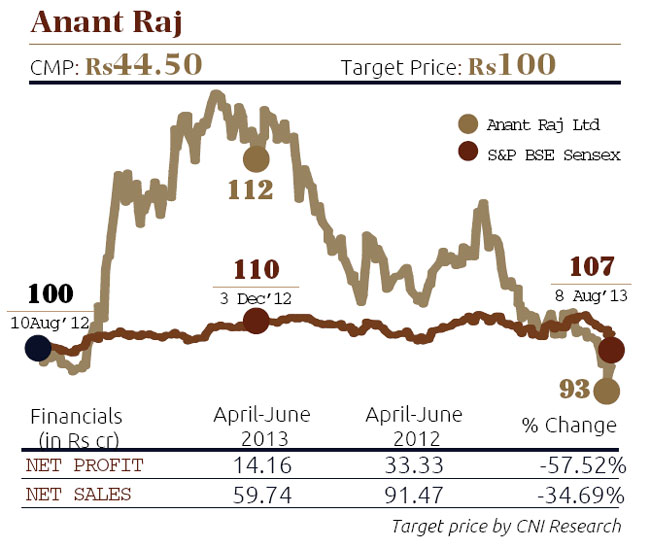 All you need to know about home loans