It's a great time to be a non-resident Indian (NRI) if you repatriate money to India or invest in the country. The rupee has fallen 20 per cent against the US dollar since August 2011, giving you more bang for the buck. One US dollar sent to India was fetching Rs 44 on August 1, 2011. On January 9, 2012, it was getting you Rs 52, a gain of Rs 8.

As an icing on the cake, the Reserve Bank of India has deregulated interest rates on NRI deposits. In response, banks have increased rates on such deposits by up to six percentage points. NRI deposits, which used to earn less than 4 per cent a couple of months ago, are now fetching up to 10 per cent a year.

NRI investors wary of equity markets can now invest their dollar earnings in Indian bank deposits and get close to 7 per cent post-tax returns.

Unless the macro-economic environment improves in India, the rupee may continue to be under pressure against all major foreign currencies

Experts say the decline in the rupee is expected to continue due to foreign institutional investor outflows, rising trade deficit and strengthening dollar. Alex Mathew, head of research, Geojit BNP Paribas, says the rupee will fall to 55 against the dollar in the immediate future.

So, if you are an NRI, you can expect to benefit from a weakening rupee for some more time, provided you keep your money invested in India.

The trend is not entirely in favour of people based abroad. If you repatriate your rupee investments to the country where you stay, you stand to lose.

"Rupee depreciation has eroded the value of NRI investments in India by nearly 20 per cent in dollar terms. The drop in asset prices (equities, real estate) is over and above the losses due to rupee depreciation," says Sachin Shah, fund manager, Emkay Investment Managers.

Also, for resident Indians whose children are studying abroad, the weak rupee adds to the burden as they have to shell out more in rupee terms. The same is true about travellers to foreign destinations.

To increase dollar inflows and check the decline in the rupee, the RBI recently deregulated the interest rates offered by banks on non-resident external (NRE) and non-resident ordinary rupee (NRO) accounts.

"At present, interest rates on NRO accounts are in the range of 8-10 per cent per annum, while that on NRE accounts are up to 10.10 per cent, depending on the tenure. Similarly, even some corporate fixed deposits are offering attractive interest rates, which is a sweetener for NRIs," says Rounaq D Neroy of PersonalFN.

Though interest earned on NRE and FCNR accounts is tax-free in India, the tax rate for interest income from NRO accounts is 30 per cent. However, NRIs living in countries with which India has a Double Taxation Avoidance Agreement (DTAA) can avail of lower tax rates.

For example, India has a DTA agreement with the US. An NRI based in that country has to pay only 15 per cent on interest earned on NRO deposits.

The increase in NRI deposit rates, the 20 per cent rupee depreciation against the dollar and tax benefits under DTA agreements are a once-in-a-lifetime investment opportunity for NRIs. We have illustrated the gains in the table Making Hay.

Fixed deposits are not the only option for NRIs in India. The equity markets have fallen close 20 per cent since the beginning of 2011 and many large and mid-cap stocks are trading 30-50 per cent below their year-ago prices. The net asset values of equity mutual funds are also much lower than last year, making it a good time to invest in Indian equities.

Even the debt space looks attractive with treasury bills and government securities trading at over 8 per cent yield. NRIs can invest indirectly in these securities through debt mutual funds. 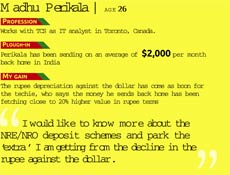 Currency fall against dollar not unique to India

Why a falling rupee is good for investors