Foreign institutional investors, or FIIs, are playing hot and cold with Indian equities. After pumping in a massive Rs 43,950 crore during the first three months of 2012, FIIs withdrew Rs 1,958 crore during April-June.

With financial musclepower at their command, they have a large say in determining the direction of the market. But, do they have a similar influence on individual stocks that emerge as their favourite buys, where their collective holding shows an increase?

If one looks at aggregate FII investment during 2011-12, it would appear that stock prices in general react positively when FIIs buy into them and slide when they exit.

An analysis of FII purchases and sales during the year shows that of the 79 stocks in the BSE 500 index in which foreign institutional investors increased their holdings, prices of 53 stocks saw an increase.

However, when analysing individual stocks, it is clear that one should not blindly purchase stocks in which FIIs are increasing their stake. In fact, of the top five stocks in which FII holdings have gone up the most in 2011-12, prices of two, Voltamp Transformers and HDFC, showed a decline during the year

However, it is not clear from the data the price levels at which FIIs increased their holding in stocks. 129 per cent
is the rise in price of Kajaria Ceramics stock with FII holding going up from 5.08 per cent to 8.64 per cent.

Data indicates FIIs are bullish on banking, cement and construction material and pharmaceutical stocks as in 2010-11. However, they prefer private sector banks to public sector banks now.

There are six stocks from the pharmaceutical sector and five each from private banking and cement and construction materials sectors in which FIIs increased their holdings in 2011-12.

127 per cent
is the rise in price of VST Industries stock with FII holding going up to 2.94 per cent from 0.50 per cent

"FIIs are showing interest in private sector banks as they are secular growth stories and are relatively better investment options as compared with PSU banks in an environment where asset quality is the reason for stress on banking," says says Gaurav Dua, head of research, Sharekhan.

Dinesh Thakkar, chairman and MD, Angel Broking, says, "The pharma sector is a high return on equity generating business in India. So FIIs would invest in it. On the other hand, the cement and construction materials sector has been beaten down significantly and hence shares were available at attractive valuations."

But should you follow FIIs? Experts say there are better ways.

"Buy stocks where the promoters are increasing their stake through buyback or creeping acquisition regularly. That reflects management confidence in own company," says Gaurav Dua of Sharekhan. 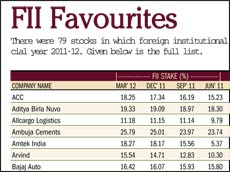 'India most expensive among emerging markets'

Foreign investors should not be taxed