A 25 per cent jump over your present salary… Is this sentence enticing enough to convince you to join a new company? Before deciding anything, it's better to wait for the 'offer letter'.

In these times of tight budgets and cost control, companies do not hire on the basis of what they will credit to your bank account but your cost to company (CTC), that is, the money they will spend on you. But what constitutes CTC? That, unfortunately, has no standard definition and varies from company to company.

"The government does not recognise the concept of CTC in computing wages . So, there are no rules, and the structuring is mostly the company's prerogative," says E Balaji, CEO and MD of Randstad India, a division of Randstad Holding NV, a leading global human resource services company.

CTC can include both monetary and non-monetary items. Apart from the basic salary, all fixed allowances and cash reimbursements are part of the package. Defined contributions towards long-term and retirement benefits such as provident fund, superannuation fund and gratuity, along with benefits given in kind, for instance house, furniture and car, are also included. Some companies even include variable payouts such as performance bonus and gratuity in the 'total target remuneration'.

Group benefits such as health and accident insurance that are either contingent or for which no specific value can be attributed to a single employee may also be included on the basis of derived or ascertained value. 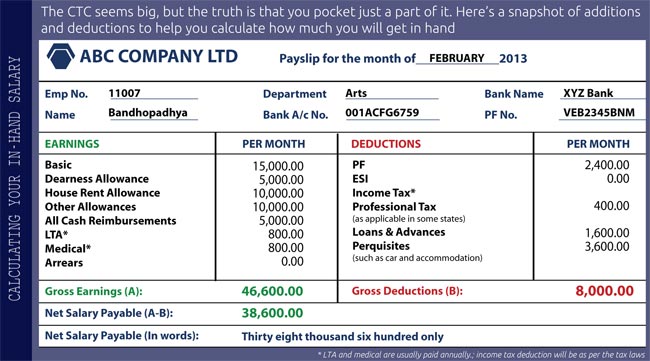 Except for statutory heads such as Employee Provident Fund (EPF), Employees' State Insurance, gratuity and bonus, where the rules prescribe minimum contributions, there are no set rules on structuring the cost to company.

However, there are some practices that all companies follow. For instance, the basic pay is generally 35-50 per cent of the CTC and house rent and dearness allowances are a percentage of the basic pay. Contributions for retirement funds such as EPF and superannuation fund are also linked to the basic pay. Other benefits such as leave travel, medical and conveyance allowances serve two aims. One, they increase the net takehome salary. Two, they make the salary structure more tax-efficient. For instance, medical reimbursement up to Rs 15,000 a year increases the salary in hand without adding to the tax burden.

So, unless you see the salary break-up and do the math, you cannot be sure about what you'll get in hand. For example, suppose the company has offered you a good salary increase but has made variable pay a big part of the CTC. In such a case, the compensation may be less than expected and the deal may not turn out to be as good as it seems. The key, therefore, lies in finding out what makes up the CTC. Here we discuss some common elements of the CTC and how they fit into the total package.

The base pay has three components- basic, house rent allowance or HRA and dearness allowance. The basic is the biggest chunk, usually 35-50 per cent of CTC. Senior employees get much less basic pay as a proportion of CTC than mid- and junior-level staff. This is because basic pay is fully taxable and so for people in higher tax brackets it makes sense to keep that to the minimum and get paid through allowances that attract nil or lower tax.

FROM THE MAGAZINE:How to use tax-saving intruments for best returns

Dearness allowance (given mostly to government employees) is a percentage of basic pay and is paid to lower the impact of inflation. The HRA is usually 40-50 per cent of basic pay depending upon where you live. 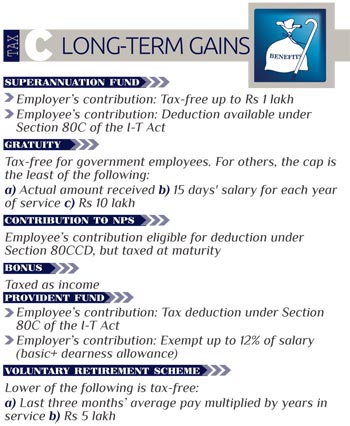 Allowances and reimbursements are guided by two things-the pay scale and the tax rules that apply to these components.

Allowances are sometimes paid irrespective of whether the employee has incurred the expense. These are fully taxable if bills are not provided. However, if the expenses are incurred and bills submitted, the allowances are either not taxable or taxed only after a limit. For instance, phone bills and allowances to buy books and periodicals are not taxed if the bills are submitted. However, fixed allowances, for example for entertainment, which are credited to your bank account every month with the salary are taxable if bills are not provided.

But this rule is different for most government employees. For them, entertainment allowance up to 20 per cent of salary (exclusive of allowances, benefit and perquisite) or Rs 5,000, whichever is less, is exempt from tax.

FROM THE MAGAZINE:How to get tax gains from your losses

Since the tax-free limit for conveyance allowance for commuting to work is Rs 800 a month, it is usually capped at Rs 9,600 a year. For medical allowance, the tax-exempt limit is Rs 15,000 a year, provided the bills are submitted.

The bills can be in the name of self, spouse, children, parents or siblings, provided they are your dependents.

The Leave Travel Allowance (LTA) is also exempt to the extent of the expense incurred. However, it is limited to two trips in a block year of four calendar years (the current block is calendar years 2010 to 2013) and travel within India. The list of allowances and reimbursements is quite long.

Perquisites provided by the employer such as a house with zero or concessional rent, vehicle, insurance, medical and club facilities are also part of the total compensation. Each has a different valuation rule. The tax treatment also varies from situation to situation.

Accommodation: The rules depend on whether it is a company-leased or a company-owned property. If the accommodation has been taken on rent by the employer, the taxable value is 15 per cent salary or the rent paid, whichever is lower.

"In case of furnished accommodation, the value of the housing benefit is first calculated according to perquisite valuation rules and then 10 per cent of the actual cost of furniture owned and provided by the employer, or in case of hired furniture, actual charges paid by the employer is added to it," says Kuldip Kumar of PwC India.

Car: Here also, the tax treatment depends on how the vehicle is used.

If the car is used only for official work, there is no tax.

If the car is partly used for official and partly for personal purposes and maintenance expenses are paid by the employer, Rs 1,800 per month is taxable as a perquisite where the cubic capacity (cc) of the engine does not exceed 1.6 litres. For vehicles with engine capacity exceeding 1.6 litres, the amount is Rs 2,400 per month. The rules apply even if the vehicle belongs to the employee but the running cost is paid by the employer.

"If the employer provides a chauffeur, Rs 900 per month is added to the above mentioned taxable values of Rs 1,800 and Rs 2,400. If a recovery is made from the employee, it is deducted from the perquisite value," says Kumar.

Medical Insurance: Provision of medical insurance for the employee or his family is not taxable. Reimbursement for medical treatment in specified hospitals for prescribed diseases is also not taxable, subject to certain limits and conditions. 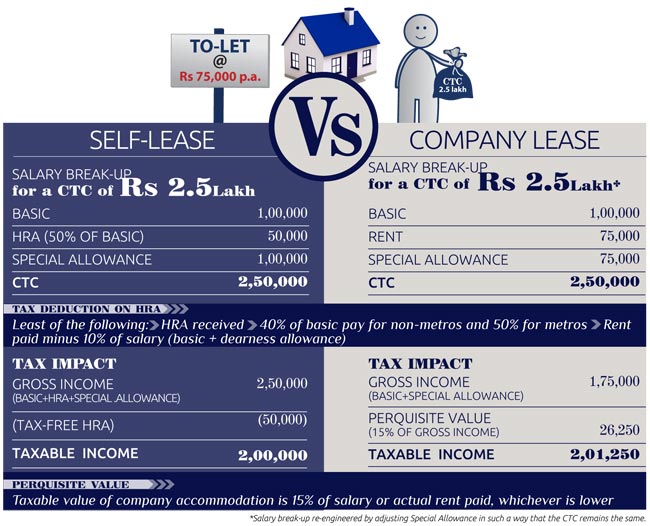 Club Membership: The perquisite value of expenditure (including the fee) in a club borne or reimbursed by the employer is included in the taxable income. However, if this expense is for business purposes or a group benefit, it will not be taxed.

"Where the employer has membership of a club and the facility is enjoyed by the employee, the value of the perquisite will not include the initial fee paid for acquiring the membership. Further, the reimbursement of expenditure for, say, a health club facility, provided to all employees will also not qualify as a perquisite," says Kumar.

Interest-free or concessional loan: The valuation of such a benefit is done on the basis of the interest that the employee otherwise would have paid, which is taken as the rate charged by State Bank of India on a yearly basis for similar loans and computed on the maximum outstanding monthly balance.

There is an exception for loans taken for specified medical treatments. "The amount of such loans is reduced by the reimbursement from the medical cover," says Kumar. Loans worth less than Rs 20,000 are also exempt.

Food and Gifts: The perquisite value of food and non-alcoholic beverages provided by the employer during work hours at business premises or non-transferable food coupons/vouchers such as Sodexo meal passes for purchasing food items and redeemable at specific stores is not taxable to the extent of Rs 50 per meal per working day. Anything above this is added to the taxable income.

Gifts and vouchers in lieu of gifts are not taxable up to Rs 5,000 a year. Anything more is taxed by adding an amount equal to the value of the gift to the taxable salary.

Movable assets: Companies at times provide employees expensive equipment. For example, a photographer may be given a camera. The valuation of such benefits is 10 per cent per annum of the actual cost of the asset or the rent/charge paid by the employer. In case some of it is recovered from the employee, the value is reduced by the same amount. Computers are not included in this.

Stock Options: ESOPs, or, Employee Stock Options is another popular perquisite offered. Here, the company provides you with option to purchase a limited number of company's stock at a fixed price (also called exercise price) on a future date.

Everyone likes to get something extra. Many employers pay bonus based on several factors, including the employee's performance (also known as ex-gratia), years spent in the company and the company's growth.

Bonus is fully taxable in employees' hands, whether part of salary or not.

At present, employees drawing a monthly salary or wage (including basic and dearness allowance) up to Rs 10,000 are entitled to an annual bonus. According to the Payment of Bonus Act, 1965, an employee is eligible for a bonus of 8.33-20 per cent annual salary if he has worked for at least 30 days in an accounting year. For computing the payout, the salary or Rs 3,500, whichever is lower, is taken.

The law applies to all establishments with at least 20 employees or factories with 10 or more workers. An amendment to the Act seeking higher eligibility limit and minimum bonus is under consideration.

Bonuses other than those covered by the law are agreements between you and your employer. As most establishments follow the concept of CTC, your job contract will include a detailed clause on bonus if it is part of your pay package.

All bonuses, including ad-hoc ones such as retention bonus, are part of your taxable income.

While allowances and perquisites provide immediate gratification, your CTC has components that will benefit you in the long run.

All retirement benefits-provident fund, contribution to an approved superannuation fund or the National Pension Scheme (NPS) and gratuity-come in this category

The employer's contribution towards provident fund is exempt up to 12 per cent of basic pay while your contribution is eligible for deduction under Section 80C of the Income Tax Act 1961.

Contribution by the employer to an approved superannuation fund is exempt up to Rs 1 lakh in the year of contribution.

Gratuity is payable to all those employed for at least five years. The amount is broadly calculated as half-month's salary for every year of service. So, if your annual basic pay is Rs 4 lakh, the gratuity due after five years of service will be Rs 10 lakh.

"In case of death or disablement of the employee, the nominees are entitled to gratuity even if the employee has served for less than five years," says Parizad Sirwalla of KPMG.

Apart from gratuity, other components are usually a part of your CTC.

Now that you know the rules, go ahead and grill the human resource executive about the nitty-gritty of your pay package. You may end up doing yourself a favour.

What you need to know about EPF accounts

Tips to dissolve a business partnership with your spouse