Tricks that the mind plays

Emotions overshadow rationality more than you think. Take the following five psychological tests to understand how the mind works—and its impact on your financial decisions.

1.Confirmation bias
Q. Which card(s) must be turned over to prove the following rule?
'If the card has an even number on one side, then the opposite face must be red.'

Did you pick the red card? This is not the correct answer, but take heart. Most people who take this test choose it due to what psychologists term the 'confirmation bias'. The right answer is the brown card and the one with 8 on it. Here is why:

Most people pick red because it is a natural instinct to corroborate what the mind already knows. Therefore, you tend to look for evidence that validates your preconceived notions and dismiss the information that identifies loopholes or debunks your ideas.

Financial implication
The confirmation bias of investors compels them to look for information that supports their ideas and ignore the facts that don't. For instance, if a report predicts that Infosys, a stock you wish to buy, will increase its revenues in the near future, you will use it to strengthen your opinion. However, you will overlook the report which points out that the company has not met its latest revenue targets. In this way, you take a decision based on a skewed opinion though you think you have researched adequately.

Countering the confirmation bias would be easy if you can play the devil's advocate to your own theories. But most people can't. So get fellow investors to do it for you. The more you interact with them, the higher are the chances of meeting someone with a contrary view. This will force you to rethink even though you do not like the fact that the other argument is more valid than yours. 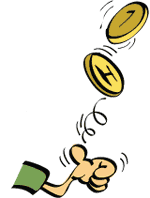 Chances are that you answered tails, exactly what psychologists expect you to do. No, it doesn't mean that heads is the answer. Actually, there is no right answer. By rules of probability, the seventh result is independent of the first six. Therefore, heads and tails have equal chances of being the seventh outcome.

Behavioural finance experts Peter Ayton and Ilan Fischer have proved that in the case of natural phenomenon that cannot be controlled by humans, the mind believes that a continuous streak will be reversed. This is why when you linked the last flip of the coin to the preceding ones, it seemed more probable that after four straight heads, the coin will show up tails.

Financial implication
Investors prone to the gambler's fallacy are likely to adopt a contrarian approach to the markets. If a stock has been rising steadily, they think that it will fall soon, and vice versa. There is no adequate reasoning for this though the belief may be rooted in the idea of mean reversion.

Needlessly bucking the trend can prove to be very expensive. In case you exit when the stocks are rising, you will lose out on opportunities of wealth creation. Contrarily, if you buy into a losing stock, you may be opting for high losses. The only way to avoid this is by depending on fundamental and technical analyses for taking your decisions. Do not rely only on your gut instinct; it may let you down. 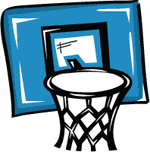 3. Hot-hand effect
Q. A basketball player has been shooting one basket every two minutes for the past 12 minutes. What are the chances that he will shoot another basket in the next two minutes?

This time you ought to have been in on the trick. Yes, the chances of the player making a seventh basket are the same as missing it. But this is mathematics. What was your instinctive answer to the question? Probably, 'high'. Notice the difference—previously you thought that the trend will be reversed, whereas now you believe it will continue. Why?

Due to something called the hot-hand effect (taking off from the term 'hot hand' for a basketball player on a lucky streak). Ayton and Fischer claim that where human performances are involved, people believe that the continuum will not be disrupted. This is because the previous performance is considered evidence of merit or demerit. So you think that the ability of the basketball player is high enough for him to score a seventh basket, missing out on the element of chance.

Another school of thought says that for short-term events, people tend to believe in the hot-hand effect, whereas in the long term, they are inclined towards the gambler's fallacy. According to this theory, you think that in a span of two minutes nothing will change and the player will successfully manage a seventh dunk.

FInancial implication
People impacted by the hot-hand effect are likely to be momentum investors. Therefore, you may buy into a rising stock that is actually peaking and face heavy losses when it falls. Similarly, you may think that a fund manager who has generated stupendous returns in the past three years will perform an encore overlooking that he was actually operating in a bull market.

As with the gambler's fallacy, you can check the hothand effect only by sticking to the basics of valuation. Do not think that a good performance in the past is a foolproof guarantee for a similar future.

4. Loss Aversion
Q. Choose between the two. A chance to:

There is no right or wrong answer to this one, not even mathematically. But it is easy to predict that you chose option 2, didn't you? The reason for this choice is simple—you hate to lose. So even though you could gain more by choosing the first option, you would rather lose less. This tendency is called loss aversion. According to research by Daniel Kahneman and Amos Tversky, a loss impacts the mind two-and-a half-times more than a gain of the same value.

However, loss aversion is not absolute and changes according to the utility of money for the individual. For instance, if Rs 750-760 is too insignificant, you would rather bet on winning more and choose option 1. But if the stake is increased to Rs 7,500-7,600 or Rs 75,000-76,000, loss aversion will kick in depending on the utility of the money you stand to lose.

Financial implication
Loss aversion is one of the reasons for disposition effect, the tendency to hold a loss-making stock for a long period. By doing this investors avoid the unpleasantness of confronting their losses. Combine it with a feeling of regret over a wrong choice and the emotional maelstrom is a recipe for financial disaster.

The disposition effect can be overcome by segregating situations. For instance, club small losses and consider them as one large loss to reduce the pain associated with it. If you have to make a choice between an instrument with a chance of higher loss and lower gain, and higher gain and lower loss (like our question), separate the two scenarios to make a prudent decision.

5. Seeking patterns
Q. Which of the two is more probable?

It seems like a no-brainer; obviously option 2 is more probable because there is a valid reason for the murder: an inheritance. Actually, your mind is playing tricks again. Option 1 is more probable because it allows for more reasons for the murder—Reena could be having an affair, Raj could be overwhelmed by momentary rage, Raj may have killed her accidentally, etc. The second situation is very specific and, hence, less probable.

Acclaimed author and risk specialist, Nassim Nicholas Taleb, claims that the mind is not wired to accept randomness. Therefore, it imposes a pattern on randomness to make it easier to understand and confine to memory. One of the most common patterns is cause and effect. So, we are prediposed to linking disparate events in this relationship simply because they have occurred together before.

Financial implication
There are too many irrational patterns that investors follow. For instance, people believe that after the annual budget, the stock market becomes more volatile. This theory is based on past data, according to which, this has happened before. However, there is no empirical link between the two. Unfortunately, investors rely on such patterns as it helps structure their thought processes.

It is not possible to re-programme your mind to accept randomness as it exists. However, you can control the effect of seeking patterns by putting it down in the form of an equation. Check if an investment strategy is validated only by the argument, 'It has happened in the past and therefore it will happen again.' If so, you may be in for a nasty surprise. In finance, history is whimsical and may not repeat itself.