Most people have only a vague idea of where their money goes, and in the process it doesn’t go as far as it should. 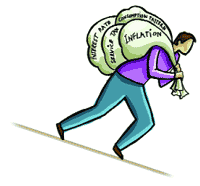 Mr. Gupta is financially well off. He earns and spends well. He owns the house he lives in, has two vehicles, his wife earns about as much as he does and his two children go to a “reputed” school. He has a bugbear though— his new neighbour. Whenever Gupta talks to his neighbour, he is left with a sense of insecurity and inadequacy. No, the neighbour isn’t richer than Gupta, it’s just that he seems to be in better control of his finances. They share common dreams—of retiring early, sending their children abroad for higher education or going on extended family vacations. But when Gupta talks of these, his plans sound like wishful thinking. Whereas when the neighbour talks of similar plans, they sound like well thought-out financial goals.

Mr. Gupta is MONEY TODAY’s proverbial middle-class Indian—doing well, yet feeling insecure. Any amount of salary hike would not lessen his insecurity. That’s because his problem is not how much he— or his family—earns, but how he spends. His income isn’t insufficient; it’s only that his spending is inefficient.

Most people have only a vague idea of where their money goes, and in the process it doesn’t go as far as it should. The solution is simple-yethardly- practised concept of family budgeting. As with just about anything, the more closely you examine your expenses, the easier it will be to identify ways to improve it. And it is far more important to budget when you are doing well than when you are not. As our cover story establishes, there are forces other than inflation that are chipping away at the earnings of most Indians, almost stealthily.

Sure, with time your consumption basket will and must change, but not all changes are necessary and are for the better. Look for items on your list that are indulgences disguised as needs. If you buy your child a toy every time you take him to the market—an expenditure which is forgotten within minutes of returning home—that’s certainly something to cut back on. Likewise, if you have bought a large sedan car without a particular reason (your family is small and you don’t often hit the highways), choosing a cheaper economy car might be a better decision. You can make amends easily when you are relatively better off because the component of discretionary spending is higher in your overall expenses.