Invest in mid-caps when they are in the early stages of growth after recovering from a downturn. 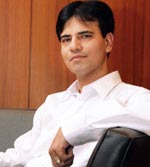 I started my career as a growth-oriented fund manager. This is because in 1998-99, value investing was more or less a dead concept and the only stocks that were performing were growth stocks in the technology space. No one was looking at auto, cement, steel and other commodity sectors. The first bull market I witnessed was in 1999-2000 and was carried away by the sentiment at the time.

I followed the concept of growth but looked for value. This essentially meant that I tried to look for cheap valuations in growth sectors. Later, I realised this approach was very dangerous as it led me to buy highrisk, small-cap stocks. Smaller IT companies were cheaper than well-known names like Infosys and Wipro, but a large number disappeared after five years. Their bold earnings forecasts were never met.

The learnings from the subsequent bear market made me more judicious in evaluating stocks and helped me realise the importance of value investing. Now I call myself a value-oriented growth fund manager because value without growth does not translate into returns. A large number of companies remain cheap forever as they have consistent low growth or slow growth earnings which, when adjusted for inflation, do not provide any real returns to investors. Earnings growth and earnings outperformance are the keys to positive returns from stocks.

I believe in the bottom-up approach to investing. This involves evaluating a company based on its competitive positioning, growth potential of the business, the market for its goods or services, pricing power, ability to sustain profit levels, earnings visibility and return ratios. A bottom-up approach usually delivers the same results as a top-down approach, but in a more efficient manner. Here, one is focusing first on micro research and then trying to evaluate the same in a macro environment.

One of the key sectors I had invested in at the beginning of the last bull cycle was automobiles. After meeting the managements of a number of auto companies in early 2002, I realised that they had restructured substantially over the previous five years and were witnessing a significant volume growth. This, combined with consistent cost-cutting, was a potent combination in an industry which has a high operating leverage. My key picks at that time were Mahindra & Mahindra at Rs 100 levels and Tata Motors at Rs 75 levels. An overweight position in these two stocks based on a bottom-up research finally led me to the same result as a top-down view would have given.

I have also observed that if one is successful in evaluating only the management of the company and its ability to deliver above-average returns to investors, then the company is often investment-worthy. A good management will find avenues for growth that one may not be able to visualise.

Similarly, invest in mid-caps when they are in the early stages of growth after recovering from a downturn in stock prices. The key to making money in mid-cap stocks is to buy them when they are very cheap, illiquid and when no one is looking at them. Eventually, as the companies start delivering results consistently, quarter on quarter, more and more people will start buying these stocks and liquidity will build up.

The insane pricing of IPOs