We take you through a series of situations that any of us could find ourselves in, and tell you how others have dealt with them. We hope you never need to face these situations. But if you do, take a lesson from the scouts-and be prepared.

What if? These have got to be among the most ominous words in the English language. What if you fall seriously ill and are never able to work again? What if your child is born autistic? What if you lose your job? Or take a career break? What if you die tomorrow; who will take care of your family? What if your happy marriage breaks up? Scary, right?

The emotional trauma from any of these is bound to be immense, and it’s something you’ll have to face. You can, however, reduce your financial trauma considerably if you plan well. Money might not buy you everything, but it can take care of the bills while you put your life back on track. We’ve had occasion to say this before, but as some advice gets better with repetition, we’ll say it again: plan your finances. Take the easy way out and get a financial planner to do it for you or slog at it yourself with spreadsheets and a pencil. Whatever the method, as the ad famously says, just do it. Because you never know when disaster might strike.

We take you through a series of situations that any of us could find ourselves in, and tell you how others have dealt with them. We also spoke to financial planners to find out how best to structure a plan to take these situations into account. We look at all that you can do to ease your financial burden— investments, budgets, trusts and the like. And, like you, we hope you never need to face these situations. But if you do, take a lesson from the scouts—and be prepared. 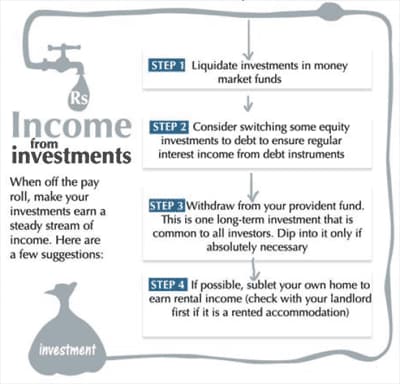 Job loss is now a fact of working life—you may be laid off or you may decide to quit. Chances are that you fall in the latter category—you may want to quit work to pursue studies, travel around the world or simply spend quality time with your family. Whatever the reason may be, you cannot rule out a phase of unemployment in your career. The big question is, are you prepared for it?

Devendra Sharma, a Delhibased cartoonist with a newspaper, found that his creative talents were wasting away and decided to quit in July 2007. He was confident of getting a job within six months. His savings and investments would be enough to get him through six months, he calculated. Unfortunately, what he did not factor in was the fact that it might take him longer than six months to find that perfect job. It took him a year.

By that time, his finances were strained. Of course, Sharma still had it better than those who were asked to leave. But how does one deal with a job loss financially?

The easiest option is to live off your spouse or parents for a while. But that’s not a long-term solution. If you’ve been following our advice over the past year, you should have an emergency fund to take care of precisely such contingencies. So dip into that fund—but promise yourself that you’ll put all the money back once you start earning.

But an emergency fund (or investments in liquid funds) is not a source of regular income. For this, you should rely on interest income. In case your fixed-income investments do not generate enough income, you can consider shifting some of your equity investments to debt (see “Income from investments”).

As far as possible, do not tinker with long-term investments. For instance, if you have saved Rs 5 lakh for your daughter’s education, don’t touch it unless there is no other option. Similarly, avoid the easy way out by taking money from the nest egg you are building to finance regular expenses.

What happens to your regular investments like systematic investment plans (SIPs) during the period of no work? Himanshu Kohli, founder-partner, Client Associates, says, “During job loss, focus on covering expenses. You can stop investments and make up for the lapse later.” So don’t fret if your SIPs or monthly payments to Ulips are being sacrificed. Just be sure to make up for this loss of earning opportunity by investing more once you take on another job.

Tackling EMIs is also difficult during this period. If you have a short-term loan and the outstanding amount is not very high, prepay the loan by withdrawing from your debt investments. The logic is that these instruments give you lower returns than the rate of interest on personal or car loans. If you want to retain your debt cushion, check with your bank if it can reschedule the loan. The facility is similar to a loan holiday for the period you are out of work (see “EMI relief”).

If you’re making a financial plan anticipating a period of unemployment, always assume the worst-case scenario. That’s what 38-year-old Piyush Gandhi did when he quit his business in 2006 to pursue a one-year MBA course that cost him Rs 17 lakh approximately. Gandhi calculated that he required about Rs 10 lakh more to meet his family’s expenses during the year. He also ensured that there was a tidy sum kept aside for emergencies. The money came in handy when Gandhi’s mother underwent an angioplasty, which cost Rs 4.5 lakh. Of this, about Rs 1.5 lakh was covered by a health insurance policy and the balance was provided by Gandhi’s emergency fund.

Learn from Delhibased Sanjeev Roy, managing partner, Bullzi, who quit his advertising job in 2005 to start his own venture. For a period of seven to eight months, the family cut corners massively. They moved out of a fancy apartment to one with lower rent and employed minimum household help, among other things. “My wife and I are movie buffs. Instead of going to a multiplex, we decided that it would be cheaper to join a movie library,” says Roy.

The only time it makes sense to take a loan is when the only other option is to withdraw money from investments that earn more than the rate of interest on the loan. Gandhi could fund the entire expense of his studies with his savings. However, he took a loan for half the amount for precisely this reason. “I did not want to disturb my long-term plans,” he says.

Often, we rely on the group medical cover provided by our employers. But if you quit (or are laid off), you cannot take advantage of this cover. So get your own policy without any delay.

That’s something Sanjay Sharma can vouch for as he had no insurance when he quit the CRPF in 2006. Immediately after resigning, Sharma was involved in a motor accident that left one of his arms paralysed. His wife Aarti was forced to take a loan of about Rs 5 lakh to fund the treatment. This, when she was already paying off a personal loan of Rs 3 lakh, taken to fund her business. The accident rocked the household budget and Aarti had to take even more loans to meet the medical and daily expenses. Today, she is repaying a debt of around Rs 20 lakh. Of course, there would have been a financial strain even if Sharma had medical insurance, but the shortfall would have been far less.

Budget, economy and the markets