Is Nano worth the ride?

It’s touted as the people’s car and its cost of ownership is also the lowest. But the Nano may not provide real value for money. 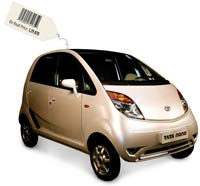 Even as you read this, the much talked about and the world’s cheapest car will be on Indian roads. With a price tag of just under Rs 1.3 lakh ($2,500), it is at least a fourth of the cost of the cheapest car in the US and Rs 1 lakh less than the Maruti 800. There are other comparisons that the ‘people’s car’ from Tata Motors evokes. For the price of an entry-level BMW, you can own 20 Nanos; the average daily cost of running a Nano is less than $4 (Rs 200) or as expensive as a Starbucks latte; it is cheaper than many highend bikes being sold in India.

We are sure that many aspiring customers in small towns and rural areas are breaking their deposits, selling some of their assets and gearing up to drive the Nano through the dusty and congested roads. But hold on. The cost of buying a car is just the beginning. It is actually the cost of ownership over a period of time, say three-five years, that is an important factor. So, how does Nano score in this respect compared with other cars with similar (or slightly higher) engine capacity? 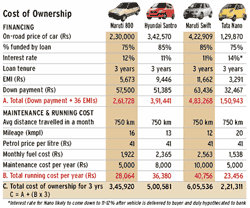 Click here to Enlarge
Money Today calculated that over a three-year period, the Nano is still the cheapest with its cost of ownership being Rs 1.25 lakh less than Maruti 800 (see chart). However, there’s a catch. Compared to its sale price, the Nano’s ownership cost is 70% higher. This is more than the respective figures for the Maruti 800, Maruti Swift and Hyundai Santro, where the difference is between 40% and 50%. Clearly, the Nano has embedded costs that are not easily visible.

The first thing that goes against the Nano is that banks have decided to charge a higher interest rate. This is despite the fact that Nano’s manufacturer, Tata Motors, has tied up with several public sector banks, including SBI, PNB, Corporation Bank, Central Bank, Bank of India and the State Bank of Patiala.

The Bank of India insists that until the car is hypothecated to the bank, that is, till it is delivered by the company to the prospective buyer, the interest rates will be 1-2% higher than the normal auto loan rates. At the booking stage, the buyer will need to pay 14%, instead of 11-12%. “During the pre-delivery period, the bank does not have any security. However, after delivery, the car would be mortgaged to the bank and thus the rates will come down,” says a bank official. 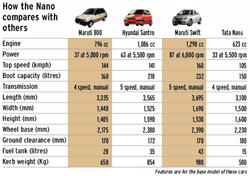 Click here to Enlarge
Another problem with the Nano is that despite its higher mileage, its running cost (maintenance plus fuel) is higher as a percentage of its sale price, when compared with the other three models (see chart). Nano’s average running cost over a period of three years is more than 50% of its sale price, while the respective figures for the Maruti 800, Maruti Swift and Hyundai Santro are between 30% and 40%.

This is because many costs such as insurance and maintenance are the same, while fuel costs are only marginally lower because of the better mileage offered by the Nano. So, the people’s car may not provide a very good value for money.

Despite this difference, Jatin Chawla, who tracks the auto sector for India Infoline, predicts that the Nano will sell two million units a year. “I think there will be a huge market for people moving from second-hand cars to a Nano.

Many would buy a Nano as the second car. The premium end of the motorcycle and scooter market would also opt for the Nano,” says auto expert Murad Ali Baig. His caveat: the Nano is a complete car for city driving, but not a performance, highway or hill vehicle.

How to voice a complaint