The loss of government jobs is good riddance to an extent. But private organised sector must become a net employer soon. If that happens, the wealth creation party will surely last.

Beyond the concern over the Sensex movements, bigger than the worry about the state of the real estate market, more relevant than the level of interest rates or inflation…infinitely more serious than any personal finance problem that comes to your mind is another concern—the suspense over the state of the job market. The number and quality of employment—the basic foundation on which all personal finance and well being is built and sustained. If there are good and plentiful jobs, there will be income generation.

Rising incomes will power higher savings, investments and spending. That, in turn, will create even more jobs and incomes. So if you are a longterm investor, one of the most significant indicators track the fate of your investment is the job growth. Mostly the information on this indicator is hazy and incomplete. Except the one released recently in an Organisation Economic Cooperation and Development (OECD) report. 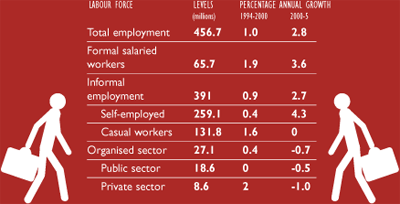 It says India created over 56 million jobs (about crore), or 11.3 million annually, between 2000 and 2005. This is higher than ever in the recorded past and much higher than the job creation in China—the economy that’s grown roughly twice as fast as India.

If these are the facts, then the engine of income and wealth creation chugging along nicely and we can happily conclude that the era of prosperity that dawned, especially since 2003, isn’t ending any time soon.

Sadly we can’t. Not unless we know how sustainable the boom in employment is. Unsurprisingly, the report shows that jobs in the organised sector—both government and private—has been either stagnant or falling in the past 10 years.

But, so far, that has been more than made up by the surge in jobs in the informal sector and an even more resurgent self-employed category. This includes a range of professions from the local kirana shop owner to the whiz-kid who is all geared up to set up his software enterprise.

For us in MONEY TODAY this isn’t much of a surprise. In the E2E section of this magazine we profile first generation entrepreneurs and the case studies we have discovered so far points to an unprecedented rise in entrepreneurship—a career that was out of bounds for middle class urban Indians till just a decade ago. Then there is the profusion of jobs in services sector—from call centre kids to bankers to retail to drivers.

The loss of government jobs is good riddance to an extent. But private organised sector must become a net employer soon. If that happens, the wealth creation party will surely last.

No PAN, no gain

Oh no, here’s another rule for mutual fund investors from the Securities and Exchange Board of India—all additional or new purchases must now be accompanied by a proof of PAN. Till now, only those investors whose holding in a mutual fund exceeded Rs 50,000 had to submit their PAN details. Giving the PAN number alone isn’t enough.

The regulatory body wants investors to submit a photocopy along with the original PAN card for verification. If you don’t have a PAN, you need to submit proof of application. For minors, give the PAN of the guardian.Without PAN proof, applications for fresh investments will be rejected, though investors will be able to switch or redeem their existing holdings.

But there’s no need to be disheartened. Legitimate investors will just breeze past this hurdle. Just give a signed photocopy of your PAN card to your broker who will verify it with the original, attest it and submit it for you. Your mutual fund will accept PAN photocopies if they are attested by a broker certified by the Association of Mutual Funds of India.

There’s some more relief. If your holdings in any mutual fund have crossed Rs 50,000, chances are you must have already submitted your PAN proof. Check out your status on the website of the Computer Age Management Services (www.camsonline.com), the company that does the back office work for most mutual funds.

If your PAN details are already registered with them, you need not submit them again. Also, once your PAN is registered with Cams, you can invest in any of the mutual funds handled by the company without furnishing the proof afresh.

Stranded in the middle of somewhere, need to book a flight immediately and don’t know what to do? Just drop in at your neighbourhood post office. Buying an air ticket is soon going to become as easy as picking up a stamp. Air Deccan has signed an MoU with India Post to sell their tickets via various post offices across the country.

The first phase has been introduced in Karnataka where 500 post offices with Internet facilities have been earmarked. All a customer will have to do is go to any of these post offices, pay cash and book an e-ticket. On the day of travel he produces the e-ticket at the airport and gets the boarding pass. This simplifies the process of booking tickets in remote areas and reduces the hassle for the customer.

According to Air Deccan it earns 9% of its ticket sales through non-conventional channels such as departmental stores and petrol pumps owned by HPCL. With 1,56,000 post offices spread across the country Air Deccan is now looking at widening its reach, especially in smaller towns.

For the postal department with each ticket booking it will earn 5% commission, the same as that earned by travel agents. And for the air travellers it ensures an accessible and easy way to fly out.

Is middle-India ready to fly?

A sound choice at last

There is one question that has long haunted the global music industry—are most consumers cyber thiefs or can they be trusted? Agreed that most of us have an inner pirate that stages an appearance now and then, but the popularity of iTunes in the West and the desperation with which music buffs have prayed for its arrival on desi shores proves that connoisseurs are not averse to paying for good quality latest music. But till now, India had no legal music sites. The online music platform launched by Yash Raj Films (YRF) promises to turn things on its
head.

For music lovers this platform, modelled on the lines of iTunes, opens up a range of choices —pay and download only those songs you like instead of being saddled with a whole album. And from the comfort of your home or office. To download a song all you need to do is log on to www.yashrajfilms.com, become a member, choose and download your songs and pay through a credit card. It’s as simple as that.

A song of 5 MB takes roughly 12 minutes to download. At Rs 15-20 per song and Rs 70-120 per album, online downloads is likely to give music CDs a run for their money. Now for the flip side. The music that you download can be played only in the computer that was used to buy the song. And you can burn only two CDs of the songs that have been downloaded. Worse is the limited range of songs available, mostly from the films produced by YRF.

When compared to iTunes the YRF offering is in its nascent stage, especially in terms of interface design. In iTunes one is allowed to copy downloaded songs to as many devices as one wishes. And iTunes allows you to burn the songs more number of times. But the icing is the sheer depth of its selection—5 million songs.

YRF’s effort is a small step, but in the right direction in fighting music piracy by providing viable alternatives to sleazy “free” music sites.

Here’s another card to add to the collection in your wallet—the “i-mint” card by ICICI Bank. But what’s new? The fact that you will earn reward points no matter how you pay for your purchases—by cash, cheque, debit card or your credit card.

The card is actually a membership card. You have to pay Rs 199 as a onetime joining fee and is valid for 10 years. Each card has its own number which needs to be quoted while making a transaction. When you make a purchase you will be handed over a transaction slip which will have your reward points quoted on it. These points can then be redeemed in lieu of various goodies. However, transactions are limited to certain merchandisers and service providers.

You do need to spend substantially before you earn any decent points. Say, you earn two points for every Rs 100 on your Airtel mobile bill. That means on a monthly bill of Rs 2,000, you will earn 40 points.

That iPod shuffle you have been dreaming about? To bag that one you require 11,800 points! Look at it from another angle — in order to get a glittering diamond pendant worth 12,400 points you’ll have to spend Rs 12.4 lakh on your fuel bill. Of course you can also stand to make a double whammy on certain purchases. Suppose you book a flight on Indian through www.makemytrip.com, you get to earn points for both transactions. The bottomline? Smart spending will surely make you richer.

Reports that credit card companies have collected over Rs 6,000 crore in a decade from customers by way of fines and fees—late fee, cash advance fee, over-limit fee, cash withdrawal fee and more—has India’s anti-monopoly watchdog on high alert. The Monopolies and Restrictive Trade Practices Commission (MRTPC) has asked the Director General of Investigation and Registration (DGIR) to probe into the matter and submit its preliminary report within 90 days.

DGIR would direct banks to furnish details of their income during last three-four years derived from other than the credit limits (extra charges), the sources added. The MRTPC has already initiated judicial enquiry against Citibank, HSBC, ICICI Bank and HDFC Bank for adopting unfair practices for selling credit cards, as the DGIR suspects these banks to have violated norms. It’s a bet that most seasoned investors believe in: for making quick and assured returns, if not the best, invest in initial public offerings (IPOs). In the first six months 2007, a total of Rs 20,720.5 crore was raised excluding follow-on offers. June alone a record Rs 22,503 crore was raised. The biggest IPO date—DLF, with its Rs 9,187 crore offer that saw a listing day high Rs 714.25 or 36% on 5 July 2007. all 56 companies went for an IPO with only four posting negative gains on listing. But the highest gains were for Vishal Retail at 200% with eight companies yet to list. With a whopping 78% of companies gaining on listing date, the primary market is a good hunting ground if one is looking at making profits.

Securities and Exchange Board of India (Sebi) has ensured quality of issues with strict entry norms and this has increased the chances of listing day gains for investors. With 68 more companies having filed approval documents with Sebi, for a collective Rs 14,000 crore, the retail investor has a lot to look forward to.

Homing in on luxury

The slowdown in the real estate market, especially in the metros, has not stopped developers from launching ultra luxury projects. Unitech has announced the launch of Grande, a mega township project of 5,300 housing units spread over 347 acre in Noida. The cost of the 2,200-5,500 sq ft apartments will range between Rs 1.85 crore and Rs 5.5 crore. And what will that kind of money get you? A Greg Norman-designed golf course, 12 theme gardens, some apartments with personal plunge pools, a hospital, schools, a five-star hotel, auditoriums, multi-cuisine food courts, bowling alleys and a sports complex. But isn’t the timing of the project wrong given the slowdown? “We have sold 25% of the first phase of 670 units before the formal launch and we have still kept the price fluid with scope for further hikes as the market improves,” says Sanjay Chandra, MD, Unitech.

What type of investor are you?