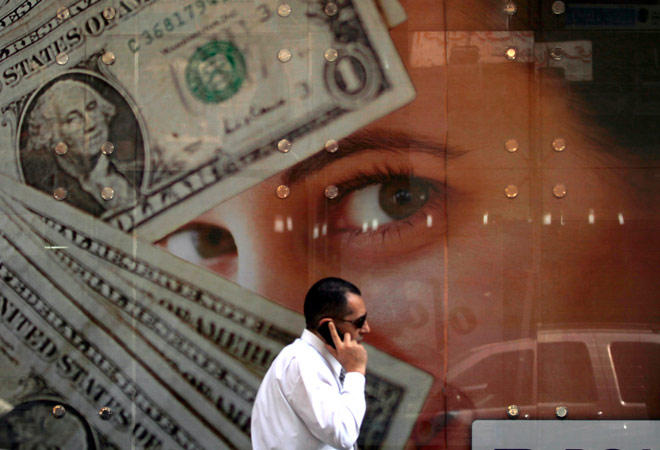 Caring for a seriously ill loved one is never easy. We want to give them the best possible health care, even if that means taking them abroad.

But it is easier said than done. The biggest issue is the huge cost involved. Worse, most health policies cover treatments only within the country.

Realising this, three standalone insurers-Max Bupa, Religare Health and Cigna TTK-recently launched covers for overseas treatment. "Our research indicates that customers are looking for best health care for their families. The new edition of our health plan (Heartbeat) has been designed to address the evolving needs of customers," says Manasije Mishra, chief executive officer, Max Bupa. 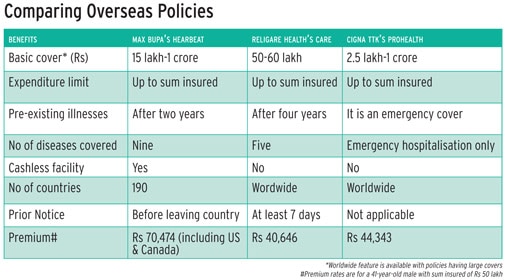 Comparing overseas policies
Click here to Enlarge
But getting treatment abroad can be costly as you will need funds for travel, accommodation as well as food and that too in a currency that will in all probability be stronger than the rupee. Considering this, insurers are targeting high net worth individuals who, generally, go for large covers. For instance, Religare Health's Care is offering the feature with Rs 50 lakh and Rs 60 lakh sum insured plans. In the Max Bupa policy, it is available with Platinum plans, which start at Rs 15 lakh and go up to Rs 1 crore.

Earlier, many high net worth individuals used to buy policies for treatment abroad from foreign insurers. These people were usually frequent travellers having a bank account and a resident visa of the foreign country. Now, with Indian insurers offering such covers, anybody can buy a policy for treatment abroad.

"People have been buying insurance policies abroad for years. Generally, these people have a bank account in the foreign country, which helps them buy a policy there," says Rahul Aggarwal, chief executive officer, Optima Insurance Broker. He says it will be now be much easier for all of us to buy policies for overseas treatment.

However, do not assume that these policies pay for each and every treatment abroad. As in all insurance policies, there is a list of exclusions. We help you understand what is covered and what is not.

Cigna TTK's ProHealth offers an emergency cover for treatments that have been certified as an emergency by a medical practitioner. Sandeep Patel, managing director and chief executive officer, Cigna TTK, explains. "ProHealth provides a worldwide emergency cover which the policyholder can avail of in the home country too. However, a travel policy can be availed only while travelling." He says they have launched a critical care policy, a benefit plan which covers listed diseases anywhere in the country and globally.

Mishra of Max Bupa says, "Under our plan, pre-existing illnesses will be covered after a waiting period of two years, which is the lowest in the industry. Previously, the waiting period was four years."

You must find out whether the country where you are planning to get the treatment is covered or not. If it is not, your claim will be rejected. For example, Max Bupa provides worldwide coverage through Bupa's network in 190 countries. For countries that are not on the panel, for instance the US and Canada, it charges additional premium.

Mishra says, "The customer has the flexibility to include the US and Canada by paying additional premium as the cost of treatment there is much higher than in other countries." Religare Health's Care works across the world.

The insured is covered up to the sum insured. Since going abroad for treatment is costly, the option of worldwide care is offered to policyholders who go for large covers.

One must be clear about whether the treatment is covered on cashless or reimbursement basis. In the latter case, you will have to arrange sufficient funds before going for the treatment. Max Bupa's Heartbeat ensures cashless treatment. In Religare Health and Cigna TTK policies you need to pay first and claim the money later. The currency is converted according to the rate on the date of payment.

For a 41-year-old male having Rs 50 lakh sum insured, the policy from Max Bupa costs Rs 70,474. For the same person, a policy from Religare Health will cost Rs 40,646. Premium rates, however, should not be the sole comparison point. Before buying, compare other features such as waiting periods and the number of diseases covered as well.

Don't forget to ask your insurer about the impact on premium if a claim has been made in the previous year. "We do not levy loading on the following year's premium if the insured has made a claim in the current year," says Gulati.

Recent high-profile cases of Yuvraj Singh and Manisha Koirala going to the US for treatment of cancer have focused attention on the issue. With access to better services and many patients not wanting people to know about their illnesses, a growing number of wealthy Indians want to go abroad for medical treatment.

But before going you should understand and evaluate the total cost. Based on that, ensure that you choose an adequate sum insured that takes into account the rising cost of medical care. Most important, do not forget to tell your insurer about the planned visit in advance.

How to get free check-ups under health cover

Is the time right to invest money for long term?