We rate the performance of Ulips since norms were changed in September 2010, focussing on returns from the schemes' investment portfolios.
Dipak Mondal/Money Today | Print Edition: February 2014 Unit-linked insurance plans, or Ulips, was a very popular insurance product only a few years back. It was a time when front-loading of charges and fees made these schemes the most remunerative product for distributors to sell.

This changed when the insurance regulator amended the way distributors were paid commission on sale of Ulips. The change was made as front-loading also resulted in rampant mis-selling. Investors were often sold Ulips as a three-year savings plan, without being told that three years was just the lock-in period and that they would benefit only if they remained invested for the full tenure of the insurance policy.

Soon, the Insurance Regulatory and Development Authority, or Irda, took cognisance of mis-selling of Ulips and acted. In came a massive shake-up of Ulip norms as charges were spread across a longer period, commissions capped, and death benefits increased. 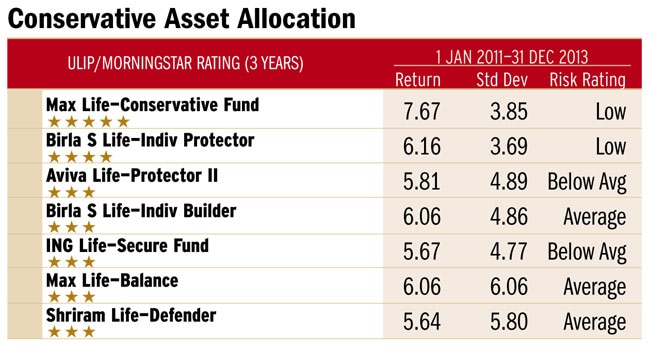 Charges are now spread over a period of five years, instead of the two years that was the norm earlier. The distributor's commission has come down from about 50% of the first year premium to 7-10%. Ulips will also have to offer a minimum life cover of ten times the first year's premium.

The regulations did make the product more investor-friendly, but it also took away the incentive for distributors to sell these plans. The contribution of Ulips to the total 'new business premium' (individual non-single) fell from 59% in March 2010 to 15% in March 2013. Now, it has been over three years since the new regulations (since September 2010) came into effect. So, how have these changes improved the performance of Ulips? This question cannot be easily answered given that equity markets have remained unchanged in the past three years. Besides, old Ulips have been discontinued and replaced by new ones complying with new regulations, making the comparison even more difficult.

However, it is true that the cap on fee and spreading of charges across a longer period have had an automatic impact on Ulip returns.

"As charges have been capped, the NAV (the unit price of Ulips) will automatically be higher," says Sunil Sharma, chief actuary, Kotak Old Mutual Life.

Sumeet Vaid, founder and CEO, Ffreedom Financial, says, when the charges were front-loaded, only small amounts were being invested in the initial years, preventing Ulip investors from taking advantage of compounding.

The debate on the relevance of Ulips continues, with many rejecting it as an unnecessary insurance product that investors should stay away from, while others are more lenient and say it is bundling of insurance and investment.

Despite this debate, we decided to take a look at the performance of Ulips since the new regulations were implemented. We believe that as long as Ulips are available in the market, people will keep investing.

Since a Ulip is an insurance product, the most apparent approach of evaluating performance would be to judge the plans on parameters such as claim ratio, premium and charges. However, we have decided to focus on fund performance. This is because a Ulip is more of an investment product than an insurance scheme. According to Vaid, investors must not treat Ulips as insurance, but as investment products that offer tax-free returns and are also eligible for income tax deduction. He also says that the increase in lock-in period to five years will force people to stay invested for a longer period when compared with mutual funds.

Besides this inherent factor, the Ulips that we are rating have also only been in existence for a little over three years. (All Ulips were relaunched after the new regulations were introduced.) Therefore, the claim ratios for such a short period would not give us a credible rating of the plans.

As far as charges and premiums are concerned, it is mostly standardised and most policies have similar costs.

RATING RATIONALES
The data on Ulip performance is not as easily available as for mutual funds. There are very few agencies that track Ulip products. Besides this, mutual funds are required to send monthly fund factsheets to investors informing them about fund performance vis-a-vis a benchmark, expenses charged, and even the fund's portfolio. In comparison, any such disclosure with regard to Ulips or any other insurance scheme is not required.

The rationale behind these ratings is to inform investors about Ulips that are performing better than the rest. The next couple of months are also when most people choose to make an investment to save tax. Of course, while Ulips do qualify, we do not mean to say that these are the best tax-saving investments available to you.

Our Ulip performance ratings are based on data provided by Morningstar, a firm that tracks both mutual funds and Ulips.

We have listed only those plans that have received three or more stars from Morningstar. This will keep it simple and give you a clear picture of the performers.

We have also given you the risk rating for each fund provided by Morningstar.