India is a good investment bet even if the economy clocks low growth in the coming financial year, says the majority of the fund managers polled
Print Edition: May 2013

"I am happy with the market moving in a narrow range. It gives us time to research and find the next jewel and multi-bagger in the market, unlike in the bull run where everything runs ahead of fundamentals," says Pradhan. He is keeping away from sectors which are exposed to government regulations such as infrastructure and power.

Mahesh Patil, CIO-Equity of Birla Sun Life Mutual Fund also feels the Sensex will be range-bound. But, according to him, the big positive is that the market has seen the bottom. "We will see no re-rating or derating. We are cautious on the Indian equity market but pressure easing on the country's current account deficit (CAD) augurs well for market sentiment."

CAD is the excess of imports over export plus fund inflows. A lower CAD will strengthen the rupee and make imports cheaper, reining in inflation. "We aren't chasing stocks but we are buying quality companies that do not have any governance, balance sheet and management issues," says Patil.

This guarded optimism was seen in the survey of fund houses commissioned by Business Today, which will be a quarterly feature. The BT-Morningstar Asset Allocation Survey for the April to June quarter polled 13 fund managers, including Pradhan and Patil, on the outlook for the Indian markets and the economy. A majority wants to remain invested in the stock market. Most of the fund houses want to allocate more than half of their investment portfolio in stocks followed by debt and gold. Financial services, IT and pharma are the preferred sectors in the equity markets with a two year investment horizon.

Over 90% of the funds polled estimate a forward price-earnings ratio (P/E) of between 14 to 16 times for the Sensex in this period-it is now close to 17. P/E is the most common measure of how expensive a stock is. About 70% of the fund managers are ready to invest 30-50% of their stock market portfolio in mid-caps and small-caps with a three-year investment horizon.

Most of the respondents said the investment cycle in India will revive soon. Almost 65% believe the investment theme will gather momentum in India over the next two to three years. The economy is expected to grow in low single digits over the next year, with a gradual improvement in macroeconomic indicators.

About 69% of fund managers see inflation between seven and eight percent, the Reserve Bank of India's targeted levels at the end of 2013.

"Soft global commodity prices and slow growth rate, especially in the US and China augurs well for us as it will keep inflation steady between 7-8%," says S.Krishnakumar, Head of Equity at Sundaram Mutual Fund.

The majority of fund managers expects a repo rate between seven and eight% (it is at 7.5% currently) over the coming year. About eight% of the respondents expect the RBI governor to cut rates by more than 75 basis points (bps) to below seven% in that period. "We expect RBI to cut rates by 75 bps by September 2013. This is on the assumption that inflation will moderate further and CAD will trend lower due to a to rise in exports," says Maneesh Dangi, CIOFixed Income of Birla Sun Life Mutual Fund.

About half of the fund managers are neutral on gold and do not see the yellow metal touching a new high in 2013, while 64% see crude oil hovering between $90 and $110 per barrel.

The majority of respondents seems to be bracing for another ordinary year for the Indian economy and is investing with an eye on the medium-to-long term. 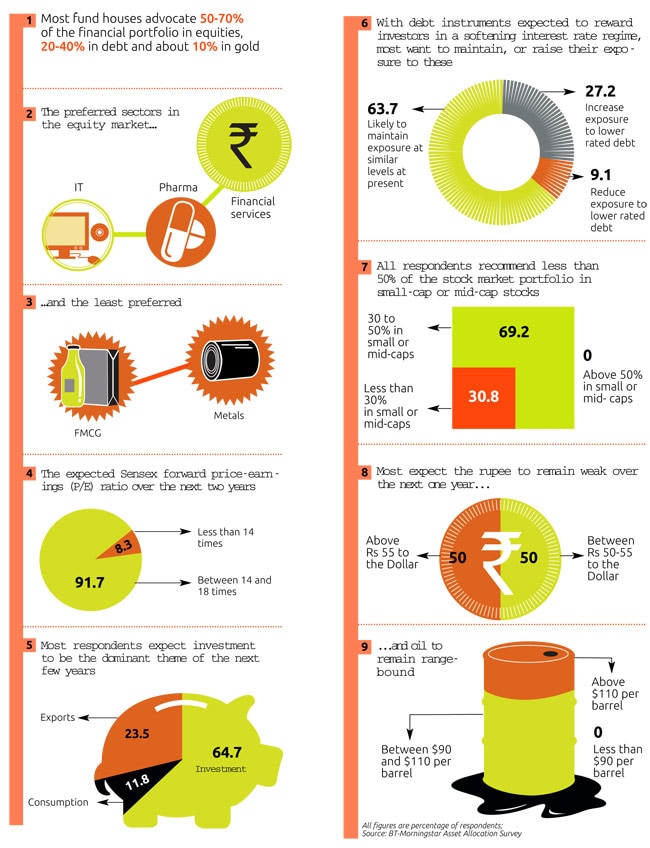 How treaties with foreign countries help NRIs save tax