You must have made a killing over the past couple of years on your investment in gold . The metal has been on an unstoppable rise, giving stupendous returns, as investors seek refuge in it from uncertain markets.

However, if you are wary of holding the metal in the physical form, there are two other ways to gain from a price rally-gold exchange-traded funds (ETFs) and gold equity funds. Gold ETFs track the real-time price of gold. Investing in them is like owning physical gold, except that they are electronically held and more liquid. A gold equity fund buys shares of gold mining companies.When the price of gold rises, so do the profits of companies that mine gold. This, in turn, leads to an increase in stock prices of these companies and an increase in the net asset value, or NAV, of the fund. 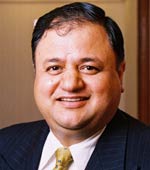 Pankaj Sharma, executive VP, DSP BlackRock
Riding the increase in the price of the metal, gold ETFs rose 34% annually on a compounded basis over the last three years (9 November 2008 to 9 November 2011), beating many assets (see The Fund Advantage). Gold equity funds also sparkled and delivered 45% annually on a compounded basis during the period.

If you want to take advantage of the improving fortunes of gold mining companies across the globe, you have a couple of options. You can invest in gold equity funds offered by asset management companies. These are mainly fund of funds, wherein the Indian fund invests in the global fund of its parent investment house.

DSPBR World Gold Fund, for instance, invests 99% in Black Rock Global Fund (BGF)'World Gold Fund, which in turn invests at least 70% funds in companies whose predominant activity is gold mining. The fund was launched in India in 2007 but the parent fund has been in existence since 1994. Similarly, AIG World Gold Fund invests in shares of gold mining companies through Falcon Gold Equity Fund based in Zurich.

The aberration
The chart, Gold Equity Funds Vs Gold, shows a positive correlation between gold prices and fortunes of gold mining companies represented by the FTSE gold mines index. Typically, gold mining stocks outperform gold and gold ETFs when gold prices are rising. During most periods since 1995, the index has moved with gold, but sometimes surpassing returns from gold by a wide margin. Aurobinda Prasad, head of research, Karvy Comtrade
Having said that, if we take a look at the performance of gold versus gold equity funds over the last one year, gold has been blazing the trail alone, leaving gold equities way behind. For example, between 9 November 2010 and 9 November 2011, gold ETFs gave an average return of 40%, while gold funds could manage just 10%. This seems an aberration considering that the performance of gold stocks depends to a large extent on the movement in gold prices.

Pankaj Sharma, executive vice president, head, business development & risk management, DSP BlackRock Mutual Fund, says there have been periods when gold stocks have delivered less returns than gold. For instance, in 2008, when there was a huge selloff in equity markets across the globe, gold stocks, too, bore the brunt, irrespective of the companies' strong fundamentals. This led to a very short period of underperformance.

"The last one year has been similar as global macroeconomic concerns (euro zone debt crisis, slow growth, including in the US) have overshadowed fundamentals and led to weakness in equity markets," says Sharma. 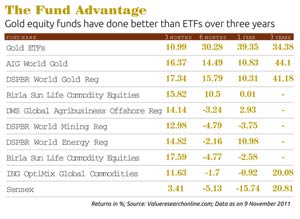 The Fund Advantage
Click here to Enlarge
Further, high energy, equipment and labour costs have hit margins of gold miners. Also, an increase in demand for all types of commodities is known to increase the capital expenditure on developing new mines. "For gold, capital expenditure and operating costs have been rising; profits are rising too, but the market has chosen to focus on cost inflation," says Vikrant Mehta, fund manager, AIG World Gold Fund.

The trend is not unique to gold. There is a similar disconnect between stocks of other commodity companies and the commodities they deal in such as copper, aluminium, iron ore and thermal coal.

Leverage on gold prices
As gold prices rise, profits of gold mining companies rise at an even faster pace. Over the last couple of years, gold miners have been reporting record profits and good cash flows.

"The average cost of extracting gold in dollar per ounce varies from miner to miner and stays in the range of $450-900", says Sharma. "Over the years, the cost has gone up along with energy prices, but the rate of rise in gold prices has been much more, benefiting the miners," he says.

Gold Equity Funds Vs Gold
Click here to Enlarge
In the last one year, the growth in earning per share, or EPS, of gold mining companies has been 30-50%. Newcrest Mining Ltd, among the top holding of gold equity funds, saw 47% EPS growth in 2011 compared to 2010. In 2012, it is estimated to increase earnings by 27%, according to Starmine Professional. In spite of such robust numbers, in the last one year, its stock has fallen 14% between 9 November 2010 and 9 November 2011. Similarly, the stock of Kinross Gold Corp, another favourite of fund managers, has fallen 14% over the last one year in spite of a 45% year-on-year increase in EPS in 2011. Despite good numbers, the stocks of these companies did not fare well. This is because equity as an asset class was punished.

It goes without saying that mining stocks are a riskier option than physical metals. Further, as gold flirted with $1,900 an ounce in September 2011, investors may not have priced that in as they werent convinced that the metal will stay at such a high level.

"Holding a gold equity fund is like holding a high-beta gold investment. It carries above-average risk," says Aurobinda Prasad, head of research, Karvy Comtrade. While they may give higher returns than gold ETFs in a bull market, they are prone to sharper corrections if gold prices fall.

Are gold stocks for you?
It is important to understand that the exposure offered by gold equity funds to gold prices is different from that offered by other gold investment options such as ETFs, physical gold and gold futures. Investors typically buy gold as an insurance against financial uncertainty. On the other hand, mining companies are susceptible to factors such as rising production costs, production lags and natural disasters, making them less reliable than gold, the safe haven.

However, experts say gold equities may be good long-term bets. "In the long run, gold equities tend to outperform gold. Given their strong positive correlation with gold prices, the current disparity in performance will reverse soon and we could see a bounce-back," says DSP BlackRock's Sharma.

This happened in 2009, when the gold mines index outperformed gold, while the BGF gold fund did even better. Also, gold equity valuations are in a historically low range, but recent earning reports confirm that the margins of gold mining companies have expanded on the back of the rally in gold prices and their cash flows are at record levels.

Therefore, there is a case for investing in gold stocks. Prasad says those who have already invested in gold equity funds should hold on to their investments as gold has the potential to break past its lifetime high soon, which will fetch handsome returns. He recommends adding more units at the $1,440-1,600 level.

It Doesn't Add Up
Click here to Enlarge
Further, gold stocks offer another source of income, that is, dividend, which gold ETFs do not. Newmont Mining, a gold mining company, recently announced a significant increase in its gold-linked dividend. At gold price of $1,600 an ounce and current share price, the stock yields 2.2%. At $1,800 an ounce, the yield rises to 3%, and to over 4% at $2000.

Investment demand has been the most important driver of the gold rally this year. The key factors that have been driving demand-concerns about financial markets, euro zone debt, the health of the US economy and inflation-are likely to persist in the foreseeable future, say experts.

"We have seen purchases of gold from a number of emerging market central banks. This is likely to continue," says Sharma. "Further, gold and gold equities are good diversifiers and hedges against financial stress; a gold portfolio should typically include both," says Vikrant Mehta of AIG World Gold Fund.
TweetYoutube

Tips for investing in bonus issues

Tips to gain from stock inclusions in indices