One can invest in commodities for which demand spikes during the festive season
Rahul Oberoi/Money Today | Print Edition: September 2014 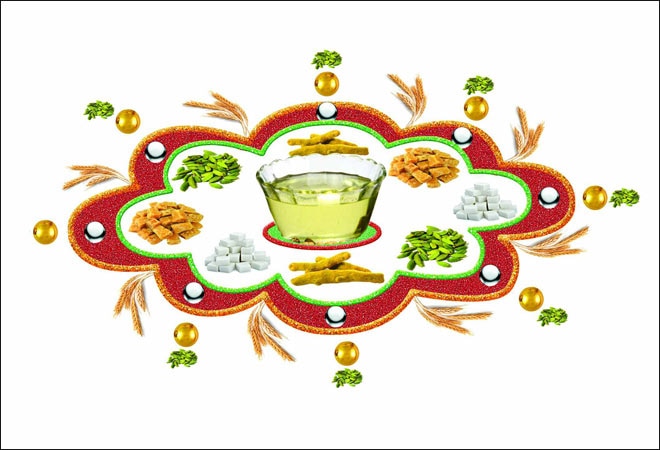 Indians celebrate a string of festivals between August and November. Then comes the peak marriage season. The result is the rise in demand for some farm commodities and precious metals . This makes a lot of big investors bet on these in the last five months of the year.

For instance, gold, silver and wheat prices have never fallen between August and December in the last five years.

So, as the festive season begins, we bring you the price outlook for commodities for which demand generally rises in this period. 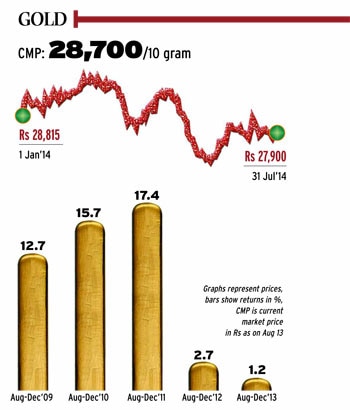 Latest data from the US indicate the economy there is gaining strength. This usually means a rise in demand for US dollars and fall in gold sales. This is because both these assets compete in the global markets for 'safe haven' status. A rise in demand for one is usually bad news for the other.

Experts say festive demand will rise by 10-20% in the second half of 2014. "We have seen that even a small recovery in demand in the festival season leads to a rise in prices. But we are not expecting any sharp rise. Brighter outlook for the US economy and expectation of rise in interest rates there in 2015 will keep prices in check," says Shah. 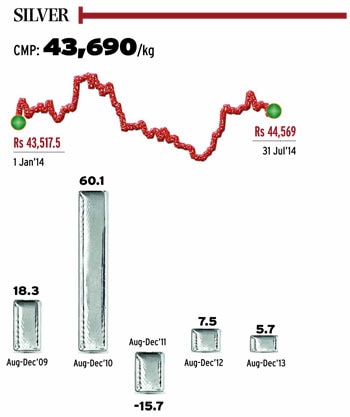 Silver: The white metal has fallen over 20% in the past one year; it was at Rs 44,360 per kg on August 1 as against Rs 56,435 per kg on September 3 last year. It has been hit far harder than gold since wheels fell off the bull market at the end of 2012, when the Fed began tapering of quantitative easing programme. 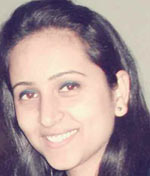 'The demand for making various dishes and sweets for festivals can push up wheat prices by 4-5% to Rs 1,690 per quintal in the second half of the year', says Nidhi Chandel, Research Associate at Globe Commodities

Fundamentally, silver lacks impetus as the US economy recovers and its appeal as a safe investment in difficult economic conditions wanes. Also, the market will factor in an early rise in interest rates, which will make many debt instruments more attractive than precious metals. Falling demand in India and China will also impact prices.

Renisha Chainani, manager, research, Edelweiss Comtrade, says silver is in a long-term downtrend. "The festive and marriage season can help, but prices have to sustain above $22 an ounce on the COMEX if they have to head towards $25. In the domestic market, if prices stay above Rs 46,000 per kg, they may rise towards Rs 50,000. If they remain below Rs 44,000, the next stop will be Rs 42,000."

The Gems and Jewellery Export Promotion Council data show a 17% fall in silver bar imports in June. The figure for the first quarter of the financial year is 31.15%. In a bid to reduce the current account deficit by curbing imports, the government had last year raised the import duty on silver from 6% to 10%. "Consequently, imports fell sharply," says Chainani. Wheat: Wheat prices fell 4.42% to Rs 1,585 per quintal between January 1 and July 28. The main reason was comfortable stock of 39.8 million tonnes as on July 1, good arrivals during the April-May season and falling exports. According to the government, wheat production in 2013-14 was 95.8 mt, higher than the target of 92.5 mt and the previous year's production of 93.5 mt.

Still, experts are bullish on the commodity. "The demand for making various dishes and sweets for festivals can push up prices by 4-5% to Rs 1,690 per quintal in the second half of the year," says Nidhi Chandel, research associate, Globe Commodities.

"Not only this, although the impact of El Nino has dimmed, the weather phenomenon may emerge again between August and September. If that happens, sowing may be hit, leading to a price spike," says Chandel.

"The present scenario is marked by abundant availability, large stocks and slowing exports. However, monsoon rain is likely to hit cargo movement. Prices usually firm up after August. Weather concerns cannot be wished away either. The NCDEX September contract is trading at Rs 1,600 per quintal. It has strong support at Rs 1,550 per quintal and resistance at Rs 1,660-1,690 per quintal. We expect a moderately bullish trend in the coming months," says Ajitesh Mullick, AVP, retail research, Religare Commodities. Cardamom: Cardamom prices rose 33% in January-July due to export demand and shortage of quality supply from Guatemala. Also, delayed rain in the first half of 2014 led to worries about shortages, pushing up prices.

"Despite expectation of higher output in 2014, prices are expected to remain stable due to festive season and export demand. However, new arrivals are likely to cap the upside. Prices will also take cues from output in Guatemala. By the end of 2014, prices may find support around Rs 800 per kg, while resistance may be seen around Rs 1,000, on the Multi Commodity Exchange (MCX)," says Naveen Mathur, associate director, commodities and currencies, Angel Commodity Broking. On August 8, cardamom was trading at Rs 915.50 per kg on the MCX.

Refined Soy Oil: India was flooded with cheap refined soy oil imports this year (86% higher in January-June compared to last year). That's why prices fell 1.62% to Rs 685.2 per 10 kg on the NCDEX between January 1 and July 28.

Experts are bullish on the commodity for the short term. Faiyaz Hudani, associate vice president, research, Kotak Commodity Services, says, "The upcoming festive and marriage season may support prices in the short term. But rise in global supply and high imports may cap the upside. Refined soy oil could trade in the range of Rs 700-600 in the next quarter. The bias will be downwards."

"The US, Brazil and Argentina, which account for 80% of the world's soybean production, are expecting a record output in 2014-15," says Hudani. A look at the futures price on July 31 shows the market is expecting a rise in prices. "The forward curve is in contango, which means the price is higher compared to the price of the near-month futures contract on the national bourse. In the long term, futures are expected to maintain support above Rs 6,000. The upside may get extended towards Rs 8,000 levels in the days to come, crossing the resistance at Rs 7,000 levels," says DK Aggarwal, chairman and managing director, SMC Investments and Advisors.

The demand for turmeric from pharmaceutical and food industries peaks between September and December. "Low supply in the market before the new crop starts coming in January and festive demand may push up prices," says Aggarwal. Sugar: The demand for sweets peaks during the festival season. Nikhil Kamath, director, Zerodha, says, "We expect the rally in sugar to continue in the second half of the year with output in Brazil (a major producer) set to fall due to erratic rain there."

This year, sugar prices rose 9% (to Rs 31,00 per quintal) till July 28. One reason, Kamath says, is that the government increased the import duty from 15% to 40% and extended export incentives until September 2014. This triggered fears about shortages in the domestic market. Click here to Enlarge
Gur (jaggery): The performance of gur is usually moderate in the second half of the year. Demand is expected to rise in the festive season.

Also, a lower-than-normal rainfall will reduce cane production and lower the quality of sugarcane.

Rohit Gadia, founder and chief executive officer, CapitalVia Global Research, says, "Technically, we can see consolidation in the next two-three weeks, but for the next one-two months we can expect a fall to Rs 1,160 per 40 kg. If prices find support at this level, we can expect a bounce-back. If they manage to remain above Rs 1,180, further upside can be expected till Rs 1,250 and Rs 1,348 by the end of December.

"Aurobinda Prasad, research head, commodity and currency, Karvy Comtrade, says, "The main reason for the price rise is unseasonal rain and hailstorms in sugar-producing regions, including Uttar Pradesh, Maharashtra and Tamil Nadu. Also, costs have risen sharply due to higher cane prices and labour costs. Farmers have sold a large amount of high-quality cane to gur units, which pay 5-10% more than the price fixed by sugar mills.

"We are likely to see production fall by 15-20% this year," says Prasad of Karvy Comtrade.

Key ratios you must look at before investing