A return of 10 times in a year is something most people only dream of. Those who invested in guar seed and guar gum in April 2011 are among the few to have tasted such success.

To soothe the nerves of investors, the government has said it has no plan to restrict futures trading in any other farm product

Should one invest in these commodities now? In other words, will the rally last? It depends, as too fast a price rise can trigger regulatory action that can spoil the party.

Further, to curb speculation and volatility, the FMC imposed extra margins and reduced position limits in these nine commodities.

Though later, to soothe the nerves of market players, the government said it had no plans to restrict futures trading in any other farm product.

Let's look at what these nine commodities hold for you.

"Oil and oil seed prices are rising due to shortage of oil seeds in both global and domestic markets. In the domestic market, falling rupee has been a major factor," says Vedika Narvekar, senior research analyst, Angel Broking.

Prasoon Mathur, senior manager, retail research, Religare Broking, is bullish for the future. "By and large, prices will remain firm due to tight supply. The long-term trend will depend on the monsoon in June-July, when Kharif crops are sown. The government has forecast normal monsoon. Any delay in monsoon or below-normal rain can again trigger a price rise."

The United States Department of Agriculture says global production of oil seeds is estimated to fall 3.24 per cent and supply 1.47 per cent this year.

Buoyed by fall in sugarcane supplied to jaggery units and government nod for exporting one million tonnes sugar, jaggery touched a record Rs 1,283 per 40 kg on 21 March.

The main reason for the mercurial rise in jaggery prices seems to be the fall in cane diversion from 23-25 per cent in a normal year to 18-20 per cent.

Dharmesh Bhatia, associate vice president, research, Kotak Commodities, says, "Announcement of sugar export helped gur touch all-time high. However, profit-booking dragged down the price to Rs 1,215 on 28 April. The market is positive for the next two-three months and jaggery can touch Rs 1,260."

After an empowered group of ministers, on 7 February, allowed sugar exports, gur futures rose 9.7 per cent on the NCDEX till 28 April.

Karikar seconds Bhatia. "The main reason for the mercurial rise in jaggery prices seems to be the fall in cane diversion from 23-25 per cent in a normal year to 18-20 per cent."

High demand and falling production took pepper to Rs 43,485 per quintal in the futures market on 7 March.

Experts are bearish for the near term and hope a falling rupee can support the commodity.

"We are bearish on pepper. The domestic demand can go down as Indians prefer not to add pepper to their food in summer. However, the falling rupee may attract exporters. The counter has resistance near Rs 40,000," says Dey of SMC. 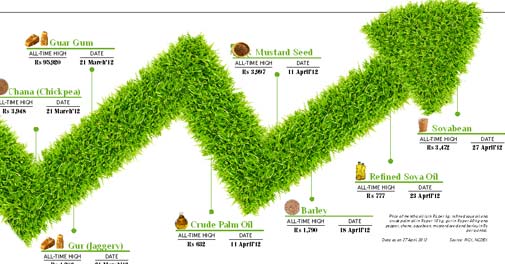 According to second advanced estimates of the government, the domestic production of chana this year is likely to be 7.66 million tonnes as against 8.22 million tonnes last year. This is mainly due to falling acreage in Rajasthan, Maharashtra and Andhra Pradesh, the major producing states.

In 2011-12, the output in Maharashtra is estimated to be 7.5 lakh tonnes, down 42 per cent, while Karnataka is likely to produce 4.98 lakh tonnes compared to six lakh tonnes last year.

Market experts are positive. Ramlal Maheshwari, senior research analyst, Fairwealth Securities, says, "The commodity can find strong resistance around Rs 3,950 per quintal. After this, it may rally to Rs 4,300."

Mentha oil is used as a flavouring agent in food and confectionery. Natural menthol cools the skin and so is used in pharmaceutical and cosmetics industries.

Higher winter demand took the oil to its all-time high of Rs 2,565 per kg in the futures market on 9 March. However, it fell 39 per cent after that due to slowdown in export and domestic demand and was at Rs 1,560 on 28 April.

In Uttar Pradesh, India's largest producer, the acreage is expected to rise to 210,000 hectares compared to 175,000 hectares last year. Production of mentha oil, 35,000 tonnes last year, is expected to cross 42,000 tonnes due to this. New arrivals are expected from mid-May. Till then, the markets may see more corrections as exporters wait for dips before creating fresh demand.

"The near-month contract should get immediate support at Rs 1,400 per kg while the long-term trend looks bullish despite higher production as export demand is expected to rise by the end of the year. The commodity can break the Rs 2,500 per kg barrier seen early this year," says Mullick.

Application: Guar gum is used to thicken the texture of ice creams. It is used as a stabiliser in cheese, artificial whipped cream and instant pudding.

Temporary suspension: The National Commodity and Derivatives Exchange suspended outstanding positions in guar gum and seed contracts from 27 March2012, the bourse said in a circular, amid mounting suspicion of foul play after a more than ten-fold rise in futures in a year.

Ban Helps Investors
Suspension of a commodity from trading on exchanges is one way to limit price movement based on speculation. The regulator does this after a detailed study of the price movement.

Before such a decision is taken, exchanges use the margin mechanism to curb price movement in a particular direction. For this, they also limit allowable client- and member-level open positions.

Further, such a decision is never taken in a hurry. The regulator also takes the views of the market before coming to a conclusion.

In light of the above facts, market participants, including investors, get sufficient time to observe the price movement and thus do not get trapped in trades. If any such commodity is in demat form, that can be sold during the given period. Therefore, such a decision helps investors think and take investment decisions on the basis of fundamental understanding.'

Rupee fall: Here's what not to do