For a bigger stake

It makes sense to keep track of what promoters are doing with their shares. It may give you a clue about where the company is headed.
Renu Yadav/Money Today | Print Edition: August 2014 How to assess company's future by tracking promoter shares

Promoters are generally the biggest shareholders in their companies. They are also the most clued in on the company's prospects. That is why investors must keep tabs on what they are doing with their shares. This is because it offers clues about what they think about the company's future. For instance, heavy buying may indicate that they think that the stock is undervalued. Besides, selling and buying by promoters leads to changes in prices of stocks and so must be keenly watched.

Of course one can attribute this partly to the rise in stock markets overall, but increase in promoter stake is generally a good sign, say experts. Take Kesoram Industries, in which promoters increased stake from 27 per cent in March 2013 to 48 per cent in March 2014, a rise of 78 per cent. Since March, the stock has delivered a return of 66 per cent.

A promoter has all the information about the company. If he is investing, it shows that he is confident about its prospects and believes that investing in the company is better than putting money somewhere else.

"An increase in stake by promoters is a positive indicator. It shows that the promoters believe that the stock is trading below its intrinsic value," says Alex Mathews, head of research, Geojit BNP Paribas Financial Services.

But experts say that while promoter holding is an important parameter, it should not be the main reason for buying a stock. Investors should always look for the reason for the stake increase. They must check what impact it will have on the company.

"An increase in stake is positive for investors. But it should not be the sole reason for the investment," says Ambareesh Baliga, an independent market analyst.

"Although an increase stake by promoters is a positive, investors should look at the reasons behind the move. He must ask the following questions. Is it time for delisting? Is there a corporate restructuring happening?," says DK Aggarwal, CMD, SMC Investments and Advisors.

Take Essar Oil, in which promoters have raised their stake from 16 per cent to 25 per cent. The reason for this is the company's plan to delist. A company has to make an open offer to the public if it wants to get delisted. Also, the public holding shouldn't be more than 10 per cent after the open offer for the delisting to happen. Therefore, to make the open offer successful, there is a high chance that the company may increase the floor price at which it offers to buy shares from the public. It will lead to a rise in the price of the stock and provide an opportunity to investors to sell at a higher price. Therefore, it is generally a positive for the investor.

Also, the increase in promoter's share because a big investor has acquired a controlling stake in the company is also a positive sign. For example, in Hexaware Technologies, the promoter stake rose from 28 per cent in March 2013 to 64 per cent in March 2014, a change of 128 per cent. Baring Private Equity Asia acquired a controlling stake in the company in September last year. "A big investor buying a stake is a positive sign," says DK Aggarwal of SMC Investments.

Also, selling of stake by promoters shouldn't always be considered a big negative for the company. The reason for the dilution may be regulatory changes. For instance, the Securities and Exchange Board of India, the market regulator, has come out with a regulation under which promoters can't own more than 75 per cent stake in PSUs. This will trigger a reduction in promoter stake in various PSUs.

However, a large-scale and unexpected exit by the promoter without giving any reason does warrant an explanation. "A promoter may sell his shares if he thinks the stock price has reached its fundamental value," says Aggarwal. 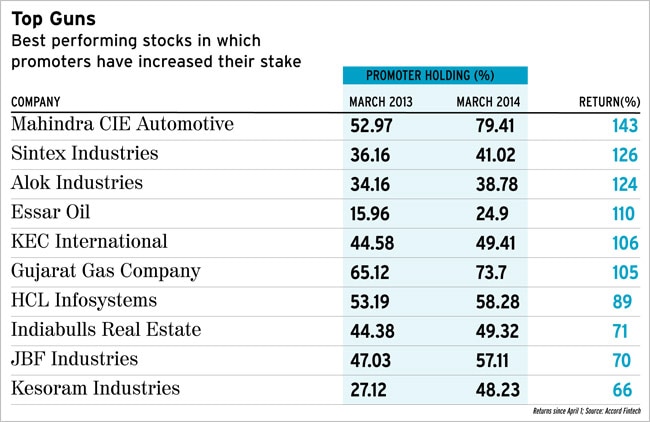 Although investors should take notice of large-scale exit by promoters, it may not necessarily result in the stock performing poorly. There are nine stocks in the BSE 500 index in which promoters reduced their stake in the one year ended March 2014. All have returned over 100 per cent since April. For instance, in Kingfisher Airlines, the promoter stake went down from 32 per cent in March 2013 to 16 per cent March 2014, but the stock has delivered a return of 60 per cent since March 31 this year.

Change in promoter stake is important but shouldn't be seen in isolation. Company fundamentals and valuations are equally important.

We bring you a few stocks recommended by experts in which promoters have increased the stake. Promoters increased stake from 53 per cent in March 2013 to 79 per cent in March 2014. The stock has returned 143 per cent since March 31 this year. The shareholders have approved amalgamation with Mahindra Ugine Steel Company, Mahindra Hinoday Industries, Mahindra Gears International, Mahindra Composites, Mahindra Investments (India) Private Ltd and Participaciones Internacionales Autometal Tresthe. According to an ICICIdirect.com report in June, "The company provides a unique auto component play with global footprint and promoters, besides turnaround possibilities. It has a presence in both commercial and passenger vehicles with strengths of dual parents. With cost controls and economic recovery playing out, we expect utilisation levels to improve, leading to rise in EBIT margins to 8 per cent and RoCE expansion to 14.5 per cent in 2016-17. The track record on turnaround via cost control and focus on financials are positives." EBIT is earnings before interest and tax while RoCE stands for return on capital employed.

Sintex is a dominant player in plastics and textile segments. The stock fell 8 per cent despite promoters increasing stake in the company by 13 per cent. A report by Maximus Securities in June says, "The company is likely to benefit from the rise in demand in the prefabricated segment and growth potential in the custom moulding segment. The new spinning project will bring in incremental revenues and operating profits."

The promoters have increased stake by 11 per cent. As per a report released by Prabhudas Lilladher in June, "The stock is trading at 11.2 times 2015-16 earnings. We believe that a strong order book and improving margin profile will help the company deliver 12 per cent sales and 71 per cent earnings compounded annual growth rate between 2013-14 and 2015-16. We maintain 'accumulate' rating on the stock."

The promoters increased stake from 44 per cent to 49 per cent in the one year to March 2014. The stock has delivered a return of 71 per cent since then. As per a report by Motilal Oswal in April, "A number of high-value projects (Sky series, Blu) have kicked off in the last 12 months and are not yet contributing meaningfully to profits. Revenues from several such projects will commence over FY15-16, aiding 50-60 per cent profit after tax growth per year. Consequently, return on equity will rise to low double digits from the current levels of 5-6 per cent".

Yearly SIPs benefit most if you invest long term