For instance, between 2003 and 2007, benchmark stock indices gave returns in high double digits while returns from bonds were in low single digits. In 2008, when the stock markets were struck by the global financial turmoil, debt did exceptionally well.

Debt and equity are not the only assets that are related. Let's look at other combinations where a price movement in one asset can be used to predict the direction of the other.

The movement of gold and silver prices has always been related. When one rises, so does the other. In fact, both have returned around 16% a year on a compounded basis since 2000.

The link is captured by the gold to silver ratio, which is arrived at by dividing the price of gold by the price of silver. "The ratio represents the amount of silver needed to buy an ounce of gold," says Naveen Mathur, associate director, commodities and currencies, Angel Broking. Dharmesh Bhatia, assistant vicepresident, research, Kotak Commodities, says analysts recommend investing in gold and silver after looking at the ratio. Investors also use the ratio to see whether one is overvalued or undervalued relative to the other. This helps them determine if it's the right time to buy gold or silver. A rising ratio indicates that silver is underpriced and gold is overpriced. a trader may short the overvalued metal and buy the undervalued one to profit from the reversion to the mean.

However, the ratio cannot be seen in isolation. "One needs to analyse the fundamentals of both gold and silver separately along with the gold-silver ratio," says Mathur.

Gold is in high demand when growth is falling, inflation is rising and monetary policy is loose. It usually rises during financial crises and when the purchasing power of the local currency is falling.

"The ratio rises during economic slowdowns as people purchase more gold because of its safe-haven status whereas silver falls due to lower industrial demand," says Bhatia. Take the recession of 2008, when the ratio touched a high of 83 (in December 2008, the average price of gold was $850, while silver was trading around $10.3). In 2011, when economic activity started picking up, it touched a low of 31. For the last two years, it has been moving between 48 and 58 as the economy grows at a subdued rate.

Bhatia says this is an ideal time to invest in gold as the ratio is near its support of 50. In the past two years, the ratio has always bounced back from these levels towards 58. Also, with the global economy slowing, the yellow metal will continue to be in demand due to its safehaven status.

Since September 2005, silver prices have been rising sharply. 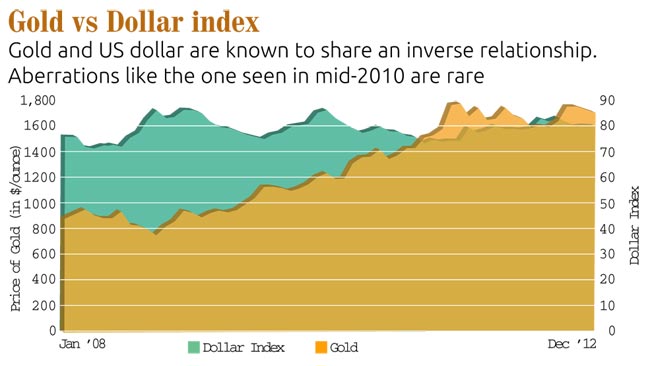 Correlations are not limited to similar commodities. They exist between some commodities and currencies as well. Currencies are influenced by factors such as supply and demand, interest rates and economic growth.

Since growth of an economy and its exports are directly related to the strength of the domestic industry, it is natural for some currencies to have a correlation with commodity prices. For example, the US dollar and oil prices move in opposite directions.

"This is because oil is priced in dollars and any increase in oil prices results in higher inflation, negatively impacting the cost of finished products," says Mathur. Since the US is the largest importer of oil, increasing oil prices adversely impact the country's economy and, hence, its currency.

In recent years, however, dollar and oil have been moving in tandem. This is because at present they are being governed by different factors. The price of oil is being influenced by geopolitical tensions in West Asia whereas global economic uncertainty and the euro zone crisis are affecting the dollar.

Similarly, gold and dollar sometimes exhibit an inverse relationship. Gold is priced in dollars and so any fluctuation in the exchange rate of the dollar has a significant impact on the metal's prices. Gold has always been an important part of the currency system. In modern times, too, it has a prominent presence in national foreign exchange reserves. "Hence, when the dollar is strong, investors move their money to the dollar, whereas during uncertain times, when the dollar depreciates, they invest in gold for safety," says Mathur. 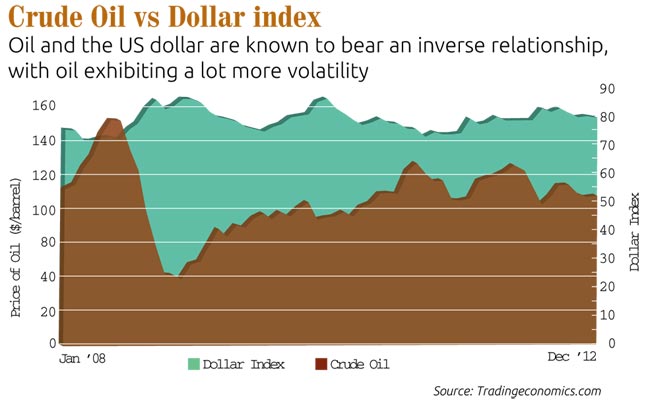 But again, this does not hold true every time. There are some periods where the relationship has been positive, for instance in 1993, 2005 and 2010.

"This is mainly due to the fact that both are considered safe during financial crises," says Mathur. The inverse relationship is not apparent during the short term but can be witnessed during 12 months and longer periods.

At present, the relationship is negative. "Ideally, investors should keep track of these ratios and the returns delivered by the metals during the past one decade," says Bhatia, keeping in mind that aberrations will always be there.

It is also important to watch the rupee. A rise in the value of the rupee will cause gold prices to fall while depreciation will support a price rise. Mathur is bullish on both the metals and says one must invest 10-15% funds in the two.

On 18 December 2012, gold was trading at Rs 31,174 per 10 grams and silver was at Rs 60,588 per kg on the Multi Commodity Exchange.
TweetYoutube
Tags: correlation | asset correlation | gold price | silver price | commodities | rupee against dollar | US dollar | foreign exchange

How purchase of credit default swaps helps you

Tips to invest in an MNC's India arm amid royalty woes