The festival season, which starts in August, is an icing on the cake for commodity investors. The season starts with Raksha Bandhan and ends with Diwali. This is followed by the peak marriage season. High demand during this period generally leads to firming of prices of many agricultural products and precious metals.

Dharmesh Bhatia, associate vice president, research, Kotak Commodities, is positive for this year too. "The market will be bullish on most commodities such as gold, silver, refined soya oil, wheat and gur due to festive demand." 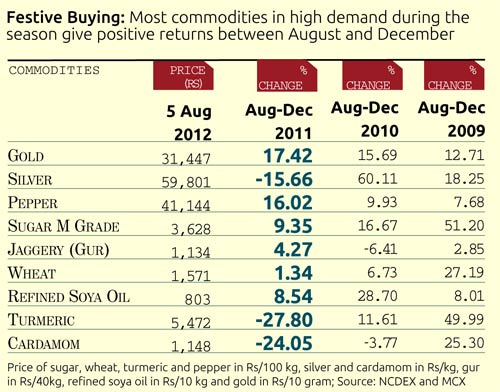 India consumes about 23 million tonnes sugar a year. Consumption in the October to December period is seven-eight million tonnes. After a dry July, vast areas of the country, including western Uttar Pradesh, India's key sugarcane belt, got good rainfall in August. The area under the crop has also increased. So, farmers are expecting a rise in production.

If the weather stays favourable, the country may produce more sugarcane this year. "During September-October, NCDEX sugar futures may trade at Rs 3,350-Rs 3,650 per quintal due to festive demand, while during November-December the price may touch Rs 3,150 and thereafter Rs 3,025 per quintal," says Ajitesh Mullick, assistant vice president, retail research, Religare Broking.

Refined Soya Oil:
Palm oil and Soyabean oil account for 68 per cent global edible oil trade, with soyabean oil accounting for a 22 per cent share. Due to concerns over corn and soyabean output in the US, which is facing its worst drought in over 50 years, and deficient rainfall in India, refined soya oil prices have risen over 8 per cent since the start of the year.

The consumption of sugar in October-December is 7-8 million tonnes. The price can touch Rs 3,025 per quintal by the end of the year.

Sudip Bandyopadhyay, managing director and CEO, Destimoney Securities, says, "Global supply will remain limited due to bad weather. If prices break past the recent high of Rs 814 per 10 kg on a closing basis, they can shoot up to Rs 900 per 10 kg by the end of the year."

Wheat:
A combination of factors, such as high demand, fear of drought and high procurement by government have pushed up prices by over 31 per cent to Rs 1,600 a quintal this year. Drought in the US and fears that Russia and Ukraine may ban exports have hit supply and led to firm prices.

"Severe shortage that millers have been facing has resulted in a 30-35 per cent rise in prices of wheatbased products in the last one month. We generally see a 10-15 per cent increase in demand. Prices are likely to rise to Rs 1,950 a quintal by the end of 2012," says Ashok Mittal, CEO, Emkay Commotrade. Domestic demand for wheat is 82-84 million tonnes a year.

Gur:
Gur is made from sugarcane. Due to lower estimated production and poor rainfall, gur prices hit a high of Rs 1,209 per 40 kg in July.

However, between 1 August and 4 September, they fell 4 per cent to Rs 1,131 per 40 kg. India consumes five million tonnes gur a year.

Harish Galipelli, head, commodity and currency derivatives, JRG Wealth Management, says, "Improved acreage due to rain in later months of the monsoon season may ease some concerns. Gur prices are likely to stay in the range of Rs 1,100 to Rs 1,250 in the next one-two months."

There is a rise in demand for most spices during the festival season. However, consumption varies. For instance, the demand for turmeric starts rising in September due to festivals like Durga Puja, Dusshera and Diwali. The demand for black pepper and cardamom rises mainly before Diwali on account of higher domestic consumption and before Christmas due to export demand.

Turmeric:
Prices, which had fallen sharply due to good output in the 2011-12 season, have started rising now due to low rainfall and fall in acreage. During the last year's festive season, prices had fallen 25 per cent. This year, till September, they have risen 7 per cent to Rs 5,497.

Black Pepper:
Prices, which have fallen since the second week of August 2012 due to imports and low demand for the Indian variety, may bounce back as demand recovers before the festive season.

Since the start of the year till July 2012, prices rose 26 per cent to Rs 42,247 per quintal. However, between 13 August and 9 September, there was a 5.3 per cent fall to Rs 40,823 per quintal. Experts are bullish on account of festive season and export demand.

CP Krishnan, wholetime director, Geojit Comtrade, says, "Spices like pepper, cardamom and turmeric will see upward price movement during the festive season. In 2012, pepper is likely to trade at Rs 44,000 per quintal."

Cardamom:
Since the last week of July, October futures of cardamom on MCX have slid over 21 per cent. They were at Rs 1,035 per kg on September 3. However, it seems prices may recover gradually due to festive season demand and poor rainfall in Kerala, which accounts for 78 per cent of the country's production.

Mathur of Angel Broking says, "Expectations of lower output amid weak monsoon in Kerala may support prices. Export demand is likely to emerge ahead of Christmas and winter. Prices are expected to touch Rs 1,250 per kg by the end of 2012." Diwali is preceded by Dhanteras, when buying gold and silver is considered auspicious. This usually augurs well for prices.

However, Amarsingh Deo, head of commodities and currency, Aditya Birla Money, says the demand for precious metals is likely to remain subdued during this festive season. "The demand for gold and silver may not be robust following poor rainfall in the first two months of the monsoon season. Drought in many areas of the country will affect rural incomes.

Rural India accounts for more than 60 per cent demand for gold.

According to the World Gold Council, gold investment and jewellery demand in India fell to 181 tonnes in the second quarter of 2012, down from 294 tonnes during the same period last year. The demand for gold jewellery fell 30 per cent to 124 tonnes. Investment demand fell 50 per cent to 56 tonnes. 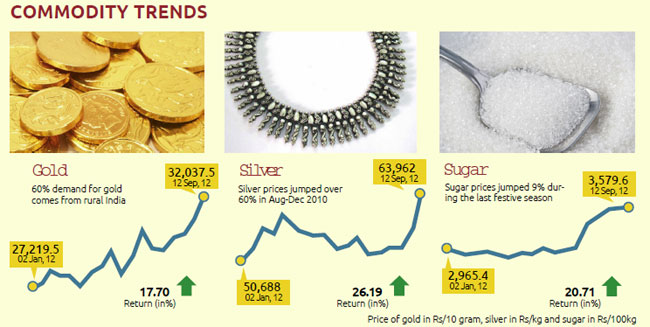 Should you invest in rain-dependent sectors?