'The financial crisis is behind us, but China is ahead of us'

Shankar Sharma, Director, First Global, is known for his bearish view of the markets, but is uncharacteristically optimistic about the economy. 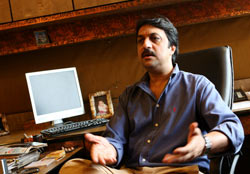 Shankar Sharma, Director, First Global, is known for his bearish view of the markets, but is uncharacteristically optimistic about the economy.

The Indian markets have moved up from a low of 8,500 in October 2008 to 15,000 now. Where are we headed now? Do you think we will see a re-run of 2004-7?
Globally, the sentiment has changed a lot and markets have run up on the hope that the worst may be behind us. The rate of decline in the global economy has slowed, which is leading people to believe that growth is imminent. In fact, India is better positioned than the global markets owing to strong macro-economic numbers. It is likely that the markets will make their way to 17,500 by December 2009 and, perhaps, to 20,000 thereafter. Globally, if the markets remain healthy, India will do well. Investors should understand that India is a high beta market. If global equities fall, India will fall more and if the global markets rise, India will outperform them by a wide margin. We will see exaggerated moves on both sides. If the global environment is good and the central banks keep liquidity easy along with low interest rates, we could see a return of the 2004-7 bullishness.

Is the worst behind us?
I would think so. We will not see a return to October-December levels. Corporate earnings have been good and every quarter will become better sequentially. As a matter of fact, the last quarter of this year is likely to see an earnings growth of 25% compared to December last year, which was a very poor quarter.

Do you think that the current rally in the Indian markets was driven by FIIs?
The FIIs have nothing to do with it. In fact, every market in the world rallied relative to its GDP and growth profile. This was largely influenced by the overall turn in sentiment in March. The Indian market moved more because of a favourable election outcome and better corporate numbers. The FII flows are incidental to the moves in the market.

The last time we spoke, you had a somewhat pessimistic view on the market. What made you change your mind?
The elections were a big factor in India, and there is the fact that if markets don’t fall, then they rise. If markets remain strong, it leads you to believe that they are discounting a good environment in the future.

Do you think that India is likely to decouple from the global economy, say the US? How is it placed among other emerging economies?
The US is a benchmark market to some extent. India, however, has been domestic-centred, which has been apparent from its better-than-expected performance on the macro front in spite of the recession and the global meltdown. So is China. This is why there is a strong reason to believe that these economies can survive on their own and grow without the growth of other economies.

Within the BRIC nations (Brazil, Russia, India, China), Brazil and Russia are not growing, whereas India and China are, which puts them in a different league. When the economy grows at 5-6% and corporate earnings grow at 5-10%, there is a loose correlation between GDP growth and corporate profits. This growth is highly valuable when there is no earnings growth elsewhere in the world. Also, considering the fact that India is far behind China on the development curve, it has far more potential for growth.

What is the downside limit for the market?
If there is a blow-up in China and it curbs its growth (there is a lot of profligacy in terms of its consumption and credit growth), we could see a severe sell-off in the markets. When there was news of an asset bubble in China, the Chinese market fell 7% in a day and our market went down from 15,000 to 13,000 in two-three days. So it may be wise to say that although the banking and financial crisis is behind us, China is ahead of us.

Which sectors seem attractive to you? What do you think about the infrastructure space?
The automobile sector looks attractive. It has been posting good growth; it has good cash flows, along with a high return on equity, and is available at reasonable valuations. Within autos, Hero Honda was good the whole of last year, but Bajaj Auto is more likely to outperform the market going forward. Tata Motors and M&M look good as well. Although stocks in this sector have run up lately, they are still trading at reasonable valuations of 20x earnings, with a visibility in earnings growth compared with 30x earnings of infrastructure stocks, which still have to translate their growth into numbers.

There is no doubt that the infrastructure sector is hyped, but it seems to be in demand considering the fact that mutual funds have raised a lot of money by way of infrastructure NFOs. The QIPs of real estate companies too have received a good response, whether it was justified or not. Investors betting on a revival in real estate look at companies like DLF and Unitech since these are good proxies. Having said that, we do not have any opinion on these stocks.

The metals space looks good, especially companies like Hindalco and Tata Steel. Within banks, second tier banks like IDBI are available at valuations below book value. Cement is interesting too, since it has underperformed the market, so there is room for a catch-up rally.

Which are your top five picks and why?
One can expect returns in the range of 25-40% from the following stocks:

Do you think there is a large variation in the valuations of large-caps versus mid-caps. Which would you favour?
Mid-cap stocks look very interesting right now, considering the fact that in an easy liquidity environment they tend to do quite well. In this space, we have sectoral picks like cement and autos, within which one could look at Shree Cement or TVS Motors.

Where do you invest yourself?
I have a more top-down approach to investing, that is, developed versus emerging economies, commodity versus equities, etc. I prefer to buy sectors, not stocks. Globally, there are a lot of exchange traded funds (ETFs) that we like to invest in. However, in India there is not much choice, except the bank Nifty or the information technology sector index. Also, I like to keep my portfolio international. So, in whichever market I spot an opportunity, I invest. I have never been a big investor in real estate, unless it is of use to me.

Advice to retail investors.
They should look at investing in equities since they are likely to outperform other asset classes for some time to come. Gold, for instance, may give only a 10% incremental return from now on. If an investor wants to look at commodities, buying copper may be a better bet.

Any financial mistakes made in the past six months?
Being too negative on metal stocks like Tata Steel in March and April because they were highly indebted companies. But these stocks rallied a lot. It is part and parcel of investing. One of the bigger mistakes I made was in 1999, when Infosys looked expensive at 100x earnings, but went up three times.

Is there something you regularly spend on?
I like to spend on watches like a Hublot Big Bang, and on suits.

What’s your financial advice for our readers?
Always be cautious in investing. If you are down 20% on any investment, book the losses and get out of it immediately. You can always reassess what you want to do at a later date.

'Preservation of capital is fundamental to investing'