After the success of their US offerings, AMCs are coming out with funds that will invest in Europe and Japan.
Shoaib Zaman/Money Today | Print Edition: January 2014 Indian markets saw the launch of six global funds between January 2012 and December this year. Of these, five are US-focussed, while one seeks to invest across the globe.

Now, a new trend seems to be emerging. Asset management companies, or AMCs, buoyed by returns from their US funds, are filing applications for funds that will invest in Japan and Europe.

The argument in favour of these funds is that they will allow investors to diversify globally. "As investors start to build portfolios that are more diversified, it will be prudent to look at a combination of emerging market and developed market funds," says Vishal Dhawan, director, Ahead Wealth Advisors.

Out of 33 global funds that Indians can invest in, 12 are thematic and focus on real estate, commodities, agriculture, etc, while 16 invest in specific countries such as Brazil, China and the US or regions like the Asean and Latin America. Some invest on the basis of the economy's development stage (one example of this is emerging-market funds). Only five are truly global, with mandate to invest across the world. 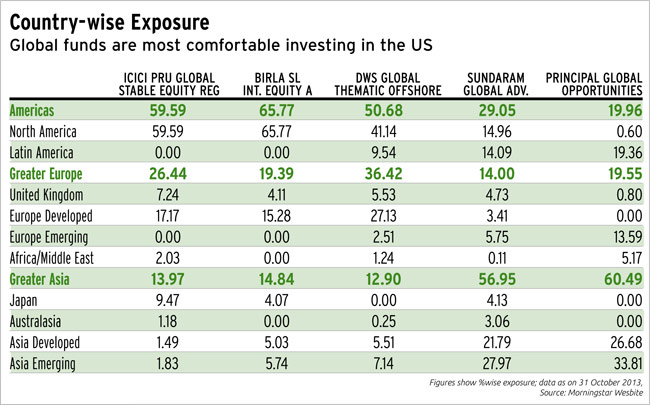 Out of these, DWS Global Thematic Offshore has the highest exposure to Europe (36%). But it has no exposure to Japan.

Judging by these launches, it seems that fund houses are betting on an early global recovery. The November report of the global investment committee of Morgan Stanley, for instance, has assigned an 'overweight' rating to international equities. "We increased our exposure to Japan and Europe in March and September. Meaningful political change has taken place in Japan, providing a strong tailwind to equity prices. Also, growth is improving in Europe, which should lead to acceleration in earnings and better stock performance," it says.

There is a significant case for funds focussed on Japan and Europe considering the positive forecasts about their economies by industry veterans.

JP Morgan AMC has filed an application for a Europe-focussed feeder fund. Nandkumar Surti, managing director & CEO, JP Morgan Asset Management, explains. "While there are some structural issues in peripheral Europe, we believe there are a few developed economies where the market has bottomed out, is attractively valued and sentiment in turning positive."

Surti says economic growth in developed markets of Europe is rebounding and unemployment is falling. Plus, the corporate sector of these economies will gain from loose credit conditions and recovery in US and emerging markets. Market watchers say there is a lot of interest in global funds because of the returns they have been generating of date. The top three performing funds -- FT India Feeder Franklin US Opp, ICICI Pru US Bluechip Equity and Motilal Oswal MOSt Shares NASDAQ-100 ETF-have returned around 50% over the last one year (till 15 November 2013).

The two main reasons for such high returns are depreciating rupee and green shoots of recovery in developed countries. Between January 1 and December 5, the Nasdaq rose 29.5% while the Nikkei 225 shot up by around 45%; the Sensex returned just 8% during the period.

"Considering that long-term currency movements are highly influenced by inflation differential between countries and India continues to have significantly higher inflation than the rest of the world, there is a possibility that the Indian currency will continue to depreciate," says Dhavan.

"We recommend these funds not due to currency depreciation but their fundamentals and growth prospects," says JP Morgan's Surti. He says these funds will reduce portfolio volatility through diversification. "As highlighted earlier, our theme for the next year is re-coupling to developed markets and rerisking the portfolio for a healthier global economy," says Surti.

But there are some people who say that Japanese and European markets are well-developed and will, hence, give lower returns in the long term than an emerging market like India. Therefore, just a part of the portfolio, up to 20%, should comprise international funds. But there are people who are a lot optimist than this.

In a recent Morgan Stanley report, commodities investor Jim Rogers said that "I sold all my assets in Japan, but I'm starting to look again. I think I sold too soon. That market is still down 60-70% from its all-time high." But he added: "My view is that we'll look back in 20 years and say the final deathblow for Japan was [Prime Minister Shinzo] Abe and his policies." Printing money to bring inflation and revive the economy may work in the short term, but these measures will not resolve Japan's structural problem, that will come back to haunt it in worse ways, he said. Japan has recently announced a series of measures to increase inflation and end the recession.

One of the steps involves NISA, a preferential tax system based on the United Kingdom's 'individual savings account', under which gains from investments in listed securities and publicly offered equity investment trusts are not taxable.