Infrastructure funds have performed poorly since 2008, but as the macro-economic growth remains intact, they are likely to do well in the future.

Before the global financial crisis hit the markets in 2008, investors had been bitten by the infrastructure bug.

There was a flurry of new fund launches, which garnered a large amount of money. In February 2008 alone, 17 infrastructure funds had raised Rs 25,000 crore from the market. During the early part of the year, most of these funds had clocked returns of 60-70% on an annual basis.

Since the fall of the market and its subsequent rise in 2009, investors have shunned infrastructure funds due to the sharp decline in their valuations and subdued returns thereafter.

In the past one year, these funds have clocked returns of 20% on an average, compared with 29% delivered by the Sensex, while the top performing sectors-FMCG (fast-moving consumer goods), pharmaceuticals and banking-have returned almost 50% during the period. What led to the underperformance by this sector?

"The infrastructure theme was overplayed in the earlier cycle, which led to a high valuation of the sector," says Sadanand Shetty, vicepresident and senior fund manager (equity), Taurus Mutual Fund.

"Although these funds are diversified in nature, their core holdings are in categories such as energy, power, construction, capital goods, metals and telecom. These sectors were hit more during the global financial crisis due to project cancellations and execution delays."

Most of the top holdings in these funds are still reeling from the pressure of surpassing their peak prices in January 2008. Bhel and L&T, for instance, are trading at the same prices that they were in January 2008, while Bharti Airtel and Tata Steel are at 30% below their peaks. Other stocks, such as Reliance Infrastructure, have not even reached 50% of their peak prices.

While infrastructure funds are currently lagging behind the market, the macro-economic theme remains intact. This is the reason that their outlook is improving gradually.

The government is aiming for a growth rate of over 9%. It has allocated Rs 1.74 lakh crore to the infrastructure sector, which is 46% of the total outlay. The allocation to roads has been increased by 13.6% to Rs 19,900 crore.

The increase in industrial capital expenditure, awarding of road contracts by the National Highways Authority of India and bulging order books of EPC (engineering, procurement and construction) companies are expected to catalyse growth in the sector.

The latest quarterly results and events hint at better times ahead for the sector. "Given the liquidity in the system, the infrastructure sector will be the next to attract investment," says Amar Ambani, vice-president (research), IIFL. Ports, roads, special economic zones, airports and power will remain essential to sustain a growth rate of over 8%, while sectors such as coal, gas and gas infrastructure are emerging as new investment themes.

The infrastructure sector involves long gestation periods. If you want to invest in this sector, have a horizon of at least three-five years, suggest analysts.

While returns from sectoral funds do not correlate directly with those from the diversified broad market in the short term, neither do these do so in a linear way. They perform well in the longer term. Much like other sectoral funds, these are also cyclical in nature. 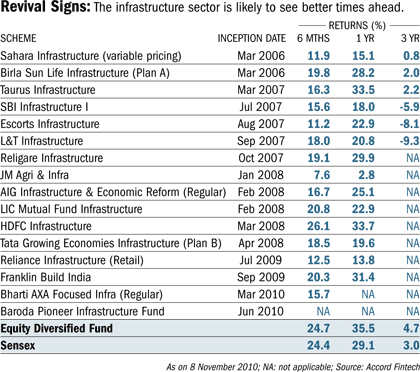 "The infrastructure theme saw an uptrend from 2004 to 2007 and then a downtrend from 2008 to 2010. There is a good chance that the uptrend will return in the next 18-24 months," says Anil Rego, chief executive officer, Right Horizons Financial Services. "Investors should hold on to these funds for another one-two years. This may be a good time for new investments through SIPs (systematic investment plans)," he adds.

It is important to choose an infrastructure fund with a consistent track record as these funds have exhibited a large variation in returns. For example, ICICI Prudential Infrastructure, Tata Infrastructure and DSP BlackRock T.I.G.E.R. have posted returns in excess of the broader markets in the past five years.

If you have just started investing in stocks, sectoral funds are not for you. Your sectoral exposure should not be more than 20% of the equity portfolio.

"Given that sectoral funds come with a higher concentration of risk, it is always better to hold more than one, say, a banking fund along with an infrastructure fund. You never know which theme works at what time," adds Rego.
TweetYoutube