After sifting through a range of professions, 49-year-old Atul Aggarwal decided to dabble in leather. 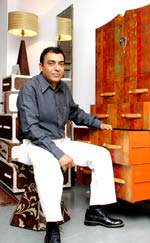 Atul Aggarwal
After sifting through a range of professions, 49-year-old Atul Aggarwal decided to dabble in leather. Ten years on, his Portside Cafe retails exclusive leather furniture from Pune and Delhi.

What prompted you to start designing leather furniture?
I’ve done a little of everything, from being a management trainee to organising rock shows to working in an advertising agency. One such venture involved making corporate gifts in leather. In 1992-93, Phoenix Shoes asked me to design a range of shoes, which I called Rucksack. In 1999, I decided to start something of my own— bigger and with a twist—and this led me to dabble in leather furniture.

When did you set up Portside Cafe?
I set up a manufacturing unit at Dharavi, Mumbai, in 1999, and began exporting leather products. The first retail store was set up in Pune in 2007 and I launched another one in Delhi in January this year.

How much did you invest?
I put in Rs 10 lakh initially, pooling in all my savings and profits from other ventures.

How many employees did you start with?
To begin with, I hired only five people. Within 10 years, my staff has grown to 120.

What is the price range for your products?
It starts from Rs 16,000 for a bedside table and goes up to Rs 2.5 lakh for a cupboard.

Did you face any problems initially?
When we set up the store in Pune, the response was very good. In fact, we broke even in the first year of launching the store. However, it did take time to convince the customers that it wasn’t difficult to maintain leather furniture.

What are your future plans?
I want to retail Portside Cafe as a brand across the world. I’m also planning to launch a designer line for ladies’ handbags and shoes by November this year.

— As told to Namrata Dadwal

On a sound track