By selling the idea of Net as a tool to make profit, Satya Prabhakar turned his pastime into a thriving business. 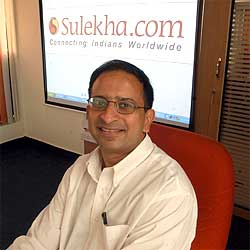 Launching a Web-based start-up in 2001 had to be either an act of sheer bravado or the result of a carefully conceived business plan. Satya Prabhakar was banking on the latter, but in effect, he fit into the former category. For, the dotcom bubble had burst and portals were not considered the promised route to success. Yet, Prabhakar persisted. And how.

He quit his well-paying job with AT&T in the US (even as he and his wife were expecting their second child), put in his savings and investments worth $25,000, and set up sulekha.com at 37. Sulekha was a dream of setting up an online community for Indians worldwide that took shape when he was employed, and the conviction of its success saw him actually write the code for the site. He turned his vocation to occupation despite the risks involved and the misgivings of the people around him. “When I’m 55, I don’t want to regret not having done something,” he justifies his move.

It’s also his business philosophy. He attributes it to the concept of ‘regret minimisation framework’ coined by Jeff Bezos, the founder of amazon.com. Another influence for Prabhakar has been Paulo Coelho’s The Alchemist, a tale about following one’s dream and finding out what one is capable of. “What’s the worst that could have happened?” he asks. “If this venture had failed, I knew I could have gone back to a job.” As for the family’s responsibility, Prabhakar was unfazed because he had kept aside sufficient funds to last them at least a year.

True to his conviction, Sulekha soon took on a life of its own. It started off as a desi version of Yelp, to help people connect with each other as well as share reviews and news. The next logical step was to set up a space where buyers and sellers could meet. So the classifieds version of Sulekha was born and it took about two-and-a-half years for the site to break even. About an year or so after this, Prabhakar began thinking of taking the business to India. By 2005, he had moved back home and set up headquarters in Chennai.

Though the business model for the e-venture was in place, India threw up several unique challenges for Sulekha. The sheer size of the population was daunting. The other, more critical, aspect involved convincing small businesses that the Internet was not necessarily a parallel universe, but that it could be a powerful tool if it was exploited in the right manner. So, Prabhakar tweaked his model to suit the country—instead of a regular classifieds site (a la Craigslist), he sold Sulekha purely as a mechanism for gathering business leads. This means that a small business can advertise on Sulekha with the assurance of a certain number of leads being generated. A user (buyer) who goes to Sulekha is given the option of asking for a specific product or service and his contacts are then sent to the advertiser as a lead. This implies that the user is assured a veritable flood of targeted responses.

What makes Sulekha’s Indian business model unique is that the advertisers—largely small businesses— have literally nothing to do online. They pay for the leads—Sulekha could be a skywriting site for all that it matters to them. There’s absolutely no commerce conducted online, so there are no security issues. As Prabhakar says, all he really needed to have in place was a crack sales team. “They (people) are my real assets. Everything else that sulekha.com owns can fit into a hard disk,” he says. So while recruiting, he looks for people with the right attitude: those who regard problems as challenges and enjoy their work.

To woo first-time advertisers, the site allows four free advertisements. This also helps keep the businesses or the B2B and B2C segments separate from the consumer-to-consumer segment. The buyers visit the site because they know that they will get responses to their queries. As John Thomas, an advertiser, once wrote to the portal: “I posted an ad in Sulekha, inviting IT professionals to come together for a joint venture in property development, in Bengaluru. I received more than 30 positive responses, and today, five of us are proud owners of prime property in Bengaluru at unbelievable prices.”

However, reactions like this took time to convert into revenue. It was three years before Sulekha broke even, but there has been no looking back since then. From Rs 50,000 worth of business that was transacted in a month initially, the site has moved on to making at least twice this amount in a day. The company has offices in five cities across the country—Bengaluru, Chennai, Mumbai, Hyderabad and Delhi—and plans to open more. Today, Sulekha is what Prabhakar always wanted it to be: “Not just a site that people love to visit, but a site that people have to visit.”

What about competition? Hasn’t sulekha.com opened doors and smoothed the way for imitators and rivals? “At the risk of sounding immodest, I don’t envisage much competition for some time,” he says, adding that classifieds have no place in a newspaper. What about online competition? He responds by referring to the ‘network effect’, which, shorn of jargon, means that a service becomes more valuable as more people use it. As the value increases, a greater number of people are drawn to the service, leaving little room for a competitor. Which is why, says Prabhakar, it’s next to impossible to replicate an Amazon.com, an eBay or a Craigslist in the US. Smaller and niche players might be able to make a go of it, but not on the same scale as the first movers.

Given the recent controversy in the US regarding ‘adult content’ on Craigslist, is this likely to be a problem here? Never on sulekha.com, says Prabhakar. “It’s not a free world or a democracy once you enter the site. Sulekha’s rules have to be followed,” he laughs. These rules insist that users provide a valid mobile phone number (checked by sulekha.com) and must be prepared to have their ad censored. “I run a clean site,” says Prabhakar.

Authoritarianism obviously pays. Users are happy with Sulekha, which gets a large number of repeat visitors, according to Prabhakar. But the portal’s success has given rise to innumerable rumours. “When you attain a certain size, there’s nothing people can do except talk,” he says. While they are talking, he is moving into different media, including mobile phones. The bottom line is clear: Prabhakar wants Sulekha to be your default option.

Tips for a dotcom start-up