After two successful ventures, Krishnan Ganesh launched TutorVista, an online teaching service. His success recipe is to keep it simple. 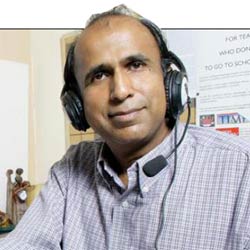 He owes his latest venture to serendipity. In 2005, Krishnan Ganesh came across a cartoon that had a father admonishing his child: "NO! You cannot outsource your homework to Bangalore!" That's how the irrepressible entrepreneur conceived the idea of an Internet service from India for students in the US. The online tutoring company was called TutorVista and required an initial investment of Rs 75 lakh, funded from his own savings and with help from a friend.

To attract students, Ganesh came up with a unique subscription model: a flat fee of $100 a month, irrespective of the subject or class. The move proved to be revolutionary, with 1,000 students enrolling in the first year alone. "The Internet is a tough medium, selling a service like tutoring is harder, and doing so for the US students from India makes it four times more difficult. If you have different prices for subjects or grades, people will run away. The basic principle is to keep it simple," says Ganesh succinctly. The serial entrepreneur should know. TutorVista is Ganesh's third successful venture, after IT&T and Customer Asset. Between these forays, he even went back to a corporate job, seamlessly traversing employment and opportunity.

In 1998, he handed over the running of his first venture, IT&T, to two of its four co-founders, though he remained a director and the largest shareholder. "I felt my time had come," he says. In 2000, the company went public, and in 2003, it was sold to iGate Technologies for $6.2 million. After renouncing operational responsibility from IT&T in 1998, Ganesh received an offer from Sunil Bharti Mittal to take charge of the loss-making Bharti British Telecom in Bengaluru. It was a challenge Ganesh wanted to take up, but had reservations about joining a V-SAT business as it would take him away from his core interest, IT. However, after he studied the British Telecom process, he realised that he was in familiar territory and settled down. He also discovered that globally the company had done well with manufacturing companies, so he focused on selling the product to similar clients. "Within a year, we had enough customers and young companies started taking us seriously," says Ganesh. In two years, the company had become profitable.

But turning around a loss-making company was not inspiring enough for Ganesh. In 2000, he started Customer Asset with another partner. The idea came from his wife Meena, a senior manager with Microsoft India. It was to provide support to companies that were witnessing an e-mail explosion and wanted to outsource their management. Ganesh's company handled these e-mails in coordination with the companies. "At that point, the dotcom boom was at its zenith and it was the right time for us to begin such a venture," explains Ganesh.

Funding was the first challenge. He approached Soft Bank, a venture capital firm that had funded companies like Yahoo and Buy.com, and received a positive response. He managed to secure US $3.3 million and also got guaranteed business for the first two years from Soft Bank's Internet companies. "If we had delayed the idea by three months, it would have been impossible to start a similar project," he points out.

But then the dotcom bust happened: companies vanished, Ganesh and his partners had to revamp their services as well as change the target market. From email service to Internet companies, they shifted to voice and call centres and focused on retail giants like Wal-Mart and Marks & Spencer. As the companies they served were old economy, there was a need to set up teams that could talk to clients, apart from handling queries through call centres. "Suddenly, the original funding seemed barely enough for six months, let alone two years," he explains.

His team managed to overcome this blip and helped the company grow. In May 2002, it caught ICICI's eye. An offer of over $20 million followed, which was accepted, and Customer Asset became ICICIOnesource, now First Source in India.

Ganesh was left with a clean slate once again. So he decided to play the mentor and invested in Marketics, a company for statistical analytics for the US clients that was started by three young entrepreneurs with an IIT-IIM pedigree. The company grew to Rs 250 crore and attracted the interest of WNS, an NYSE-listed business process outsourcing company, which bought it for over $60 million in 2007.

Ganesh's career graph seems unusual for a man whose parents were government employees and who believed a secure job to be the ultimate goal. When he quit his first job with Telco after a B.Tech from the Delhi College of Engineering, the family didn't question the move. Not finding the shop floor fun was acceptable because he went to IIM Calcutta to get a management degree. So was working in corporate planning with HCL for five years. But quitting HCL in 1990 with four other colleagues to start a computer maintenance services company, IT&T, didn't get family approval. "My mother was fiercely opposed to the idea of something so off the beaten track," he says.

It was the HCL stint that brought out the entrepreneur in him. "I had a free hand not only in taking decisions but in implementing them too," says Ganesh. In his second year, he was given the responsibility to execute an idea he had pitched—to set up a customer service centre in Mumbai. "HCL was growing exponentially, but its customer service didn't match up," says the man who introduced quantifiable metrics for the service. He also identified a huge gap and plugged it. When clients complained of dealing with multiple vendors for computers, printer, etc., Ganesh decided to create a centralised service for both hardware and software.

When he and his colleagues set up their venture, the first big challenge was accessing capital. "A services business was unheard of at the time. Bank loans were available only against full collateral, mortgaging of assets and for capital purchase. We set out with Rs 93,000 and hoped to survive on clients' advances," he adds.

It was a bumpy ride. They had trouble convincing organisations of their capacity to deliver. They landed Ranbaxy when they agreed to its condition of making only quarterly payments in advance. "We realised that for a company to succeed, not only did it require a service that would sell, but its positioning had to be such that it would work for it and the consumer," he adds.

Clearly, this is a learning he has applied repeatedly. Today, Tutor-Vista has made its teacher pool international, with 600 teachers from across India, Philippines, Hong Kong and Singapore, and most of them teach from home.

However, Ganesh refuses to be complacent. "About 95% of our business comes from the US. For the UK market, we've launched pilot projects and want to be fully operational next year," he says. He'd like to add Australia and Canada to the list and also plans to roll out services like test preparation and English language learning, besides scaling up Edurite Technologies, which he acquired in 2007. His expertise may be teaching, but Ganesh remains the eternal entrepreneurship student.