The first thing that strikes you about Pratap Dube's company is its name. Multivac India is not quite the name you expect for a company that produces moulded car roof-liners. "It has to do with what would have been my first business — multi-vaccines," laughs Dube, as we head towards his manufacturing unit in Manesar, nearly 40 km from Delhi. Dube's interest in polio vaccine was sparked by his childhood fight with the dreaded disease; he still has a limp, but doesn't use support. 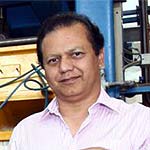 When his attempt to start a polio vaccine manufacturing unit was scuppered, he came back with a new idea, roof-liners. This ability to rebound after a setback helped him later too, when Maruti, his sole client for roof-liners, wanted him to trim costs. He began looking for other raw material vendors and for products that auto manufacturers wanted. Soon enough, he had got his orders.

In the early 1980s, Dube joined the Canadian government-owned Connaught Medical Research Laboratories in Delhi and worked here several years. When the company wanted to expand to Asian markets, he planned a collaboration to make oral polio vaccines in India. He had successfully drawn plans for China, Pakistan, India, as well as other countries in the region, but was stymied by a change of government in India in 1984. The new government decided to go with injectable vaccines instead. "The scale of the operation was such that the government had to be a part of the plan to make it work," he says.

The period between 1984 and 1991 is a blur for Dube, who was posted in London by the same Canadian outfit. Still, he considers it a blessing. "Those days were well spent and I buried the regret over not creating a vaccine that could help many people," he says.

He came back to India in 1991 with no clear idea on what to do, but with entrepreneurship firmly fixed between his personal goal-posts. An avid golfer, Dube found solace in the game and in reconnecting with friends. It was then that he invested in a friend's manufacturing unit that was supplying moulded dashboards to Maruti. "I had no training or experience in manufacturing, let alone starting a business venture, but I wanted to begin something to move on in life," says Dube. He chose manufacturing because the small-car industry was in place by then and Maruti was trying to localise content.

In 1995, he learnt from a friend that Maruti was looking for a local manufacturer of moulded roof-liners. Dube saw a reason to restart Multivac, but in a very different business. For logistics to work well, Dube located his unit close to the Maruti factory. He got technical support from a German partner, invested Rs 1 crore from his own savings and managed to raise a loan of Rs 4 crore from the Haryana Financial Corporation. "My Canadian employers paid well and I had hardly any expenses when I was based in London, so I had the money to take the risk," he explains.

Today, Dube makes door panels for the Mahindra Scorpio and roof-liners for Mahindra cars as well as other automobile brands. The product may look simple, but needs "to be made with the right material and specifications for the acoustics to be proper and for the car's thermostatic stability". Starting from Rs 500 a piece for a small car like Alto, the price goes up, depending on the manufacturer specifications.

The initial years were tough. Dube worked hands-on whether he was concerned with the product, raw material, interaction with clients or managing the finances. "The early years were fun because I learnt several things on the job, but it also meant I committed mistakes that I could have avoided," he smiles, looking at his shop floor from a vantage point. The loan from HFC always bothered Dube and he made it a point to repay it within four years. "I was not comfortable with the debt," he says.

It was also a phase when his business grew incrementally. From a turnover of Rs 5 crore in 1995, Multivac peaked to Rs 30 crore in 1998, a debtfree company, though one still largely dependent on its sole client, Maruti. "Strangely, Maruti was getting greedy and wanted to reduce costs on the roof-liners. It asked for a 16% price cut in 1998, leaving a dent in my profit margins," says Dube.

It was a move that made Dube look beyond Maruti. He used better technology and started manufacturing some of the raw material to save costs. By 2005, he ranked the highest among Maruti's vendors in terms of quality and delivery. But by then Maurti was looking at sourcing products from other vendors too and Dube saw his business falling. "I had to change tactics," he says. From three shifts, the company moved to a single shift, which was a tough decision, but then, as he says, he did not want to lay off people.

Aware of the green wave among auto majors in Europe and the US, which saw them moving towards environment-friendly recyclable parts, Multivac began using mesta, a fibre of the jute family. Scorpio, the MUV (multi-utility vehicle) from Mahindra & Mahindra that is to be exported to the US, will be fitted with door panels using this material. "Auto resellers in the US insist on panels that pass the side-impact tests. Plastics don't do so while the mesta-based liners from Multivac do," he says.

Dube hopes to post a turnover of Rs 45 crore by 2010 and is working to partner with manufacturers who can take his business forward. He is also looking for a marketing push for his wheelchair venture, a philanthropic act that developed velocity when his team managed to develop a low-cost product (see box). Dube has donated several wheelchairs to end-users. "My dream is to reach the maximum number of people who belong to this section," he says. He is the current president of the Paralympic Golf Association of India and is selecting a team for the para-Olympics to be held in India next year.

A key factor in Dube's success is his ability to deliver on high quality— he won awards as Maruti's vendor— and the facility to use every potential setback to move forward. It shows.

The presence of a wheelchair in Dube's office and in other parts of the factory is intriguing. He explains. He saw a government employee use a manual tricycle laboriously, and in 2005, got his skilled employees to manufacture a motorised wheelchair.

"The cost of imported wheelchairs is prohibitive (Rs 75,000-Rs 7.5 lakh)," he says, adding that such a price is too high even for well-heeled orthopaedically challenged people.

The challenge to make a lowcost model with maximum access was cracked when a simple solution to restrict the number of motors from three to one brought down the cost drastically.

Dube and Multivac now offer a range of wheelchairs that range from Rs 5,000 for a basic version to a motorised variant at Rs 16,000, the cheapest anywhere in the world. To sustain this price, he needs economies of scale. As of now, it remains a charitable venture.