With banks raising their interest rates, your monthly outgo towards loan repayment will go up. However, there's some respite in form of higher deposit rates.

With banks raising their interest rates, your monthly outgo towards loan repayment will go up. However, there's some respite in form of higher deposit rates.

After the Reserve Bank of India (RBI) raised its policy rates in the third-quarter review of its monetary policy, banks have raised their lending and deposit rates. India's biggest lender, State Bank of India (SBI), raised its lending rates from 14 February 2011. SBI hiked its base rate by 25 basis points (bps), making loans costlier. Base rate is the minimum lending rate of a bank. SBI also raised interest rates on some deposits by 25 bps. It is now offering 9.25% interest on fixed deposits of 555 days and 1,000 days maturity. One bps is one-hundredth of a percentage point.

Several other banks were quicker to respond to the hike in the policy rates. They raised their rates without waiting for the country's largest lender to do so. Punjab National Bank, another public sector lender, raised its base rate by 50 bps from 9.00% to 9.50% with effect from 1 February. It also increased the rates for term deposits by 25-100 bps across various maturity buckets. Allahabad Bank, Punjab and Sind Bank, Oriental Bank of Commerce, Bank of Baroda, Union Bank of India, Corporation Bank, IDBI Bank and HDFC Bank are among other banks that raised their lending rates. 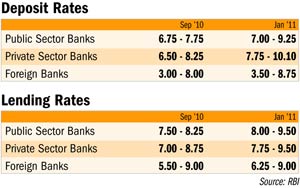 "Although it is not necessary that banks will hike rates every time the RBI does, it depends on a bank's cost of funds as well as its liquidity positions," says I.C. Agasti, chief general manager, IDBI Bank. "Since the last quarter has seen more credit off-take, banks need to have adequate money to lend. This lead to an increase in deposit rates to attract depositors."

With the rate hike, your investments in bank fixed deposits will be able to beat inflation. Among banks offering one of the highest deposit rates is Lakshmi Vilas Bank, with an interest rate of 10.10% on deposits for one year, followed by Karnataka Bank at 9.25%. Most banks are offering highest interest rates for 1-3-year deposits.

"This is a good time for investors to lock in their money in deposits, say, up to three years, which offers the maximum interest rates," says Agasti. "There are less chances of deposit rates hardening from here, unless there is a huge credit outflow."