A Bad Turn for Housing 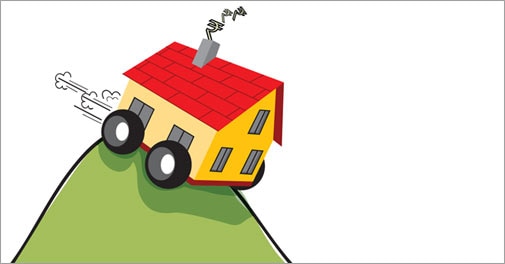 India's real estate market has been faltering for quite some time as the country's economy remains under stress. According to data from various sources, property prices have seen a correction recently. But, is the real estate market headed for a crash, an event that many prospective buyers have been waiting for?

In the April-June quarter, house prices fell in 22 out of 26 cities tracked by the National Housing Bank's Residex (residential index) compared with the January-March quarter. It is only the short-term scenario. Despite adverse conditions, property prices in most cities have been holding ground for a long time now. For instance, over one- and two-year periods, the index shows a sharp rise in property prices in Delhi, Mumbai and Bangalore.

The real estate sector has taken another blow. In September, the Reserve bank of India (RBI) advised banks to exercise caution in financing purchases under interest subvention schemes, where the builder agrees to pay the interest for a certain period or till possession of the property. The central bank issued the advisory as these loan products had fine print defining liabilities of customers in case of defaults by developers.

"In view of the higher risks associated with such lump-sum disbursal of sanctioned housing loans and customer suitability issues, banks are advised that disbursal of housing loans sanctioned to individuals should be closely linked to the stages of construction of the housing project/houses and upfront disbursal should not be made in cases of incomplete or underconstruction or greenfield housing projects," the RBI said in its notification.

Does this mean the price correction will continue?

Though the pressure on developers is immense, and rising, the real estate market, by its very nature, is localised, each location having its own dynamics.

For instance, in Hyderabad, prices have fallen due to political turmoil, while Kochi has been seeing a fall in money repatriated by non-resident Indians.

Many areas of Delhi, mostly prime South Delhi locations, have seen a price fall of 10-12% in January-June compared with the year-ago period, according to a report by CBRE South Asia, a property consultancy. In contrast, prices have risen marginally in Noida, a New Delhi suburb, while there has been a 5% price rise on the Noida-Greater Noida Expressway.

Prices have remained more or less stable in Mumbai's established localities, according to CBRE, while there has been decent capital appreciation in the suburban locations. "In Mumbai, Western Suburbs, Extended Eastern Suburbs, Navi Mumbai and Thane saw capital appreciation of 8-11% (in January-June) as compared to the second half of 2012. Prices in North Bangalore rose 8-10%, while the more established Central, Off Central and Southern locations witnessed an increase of 4-6% in the premium segment," says the CBRE South Asia report.

"Despite the poor economic sentiment, residential supply spiked during the January-June period. More than 65,000 units were launched in the leading cities compared to about 48,000 during the second half of 2012," says the report.

Most of the new launches have been in emerging locations in peripheries of the big cities.

"In metro cities, there is a trend of big builders offering discounts on existing projects or launching new projects at subsidised rates, due to which the small builders are following suit," according to 99acres.com's Singh.

Analysts say property prices will remain under pressure for some time but are bound to rise in the long term. The shortage of housing in urban India supports their assessment.

If you are a first-time buyer, financial planners suggest going ahead with the purchase. In such a case, you house is an asset as well as your home, and helps you save on rent as well as get tax benefits. Investors, of course, need to be more careful. Stay away from high-priced properties as demand for affordable properties is much more than that for the premium ones.

How RBI steps on lending against gold affects NBFCs

Recent rulings that can affect your investment