A large part of the decline in the value of the rupee in recent times is because of the dollar gaining strength.
Team Money Today | Print Edition: July 2013

Travelling to the US this summer is going to cost you a lot more, with the Indian rupee touching a record low of 60 against the dollar on Wednesday (June 26). The Indian currency, which was around 54 mark in the beginning of the year, has continued its fall in June after sliding 8 per cent in May.

"The rupee has been under pressure due to factors such as high inflation, burgeoning current account deficit and high gold imports. This is likely to persist for some time," says Naveen Mathur, associate director (commodities and currencies), Angel Broking. "Over the year, it could weaken above the 60-level and test 62.50," says Mathur.

According to a statement by Raghuram G. Rajan, chief economic advisor, Ministry of Finance, the rupee's depreciation was on a par with the currencies of Korea, Turkey and Brazil (5.5%) and much less than South Africa's rand (12%).

Clearly, a large part of the decline in the value of the rupee in recent times is because of the dollar gaining strength.

Emerging market currencies across the world have depreciated as debt outflows have increased following the US Federal Reserve's suggestion that its asset purchases might be tapered down in September. The US Federal Reserve is adding $85 billion per month to the system under its Quantitative Easing (QE) programme. Any tapering of QE will reduce the amount of money flowing into emerging economies.

The Indian debt market has seen an exodus of $3.3 billion foreign capital since 21 May 2013, which has accelerated the rupee's fall. As foreign institutional investors (FIIs) have a relatively small share in the Indian bond market, the outflow has had a limited impact, though. 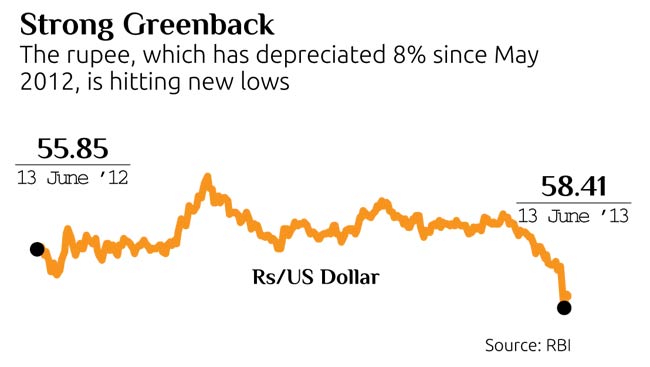 "Although the onset of the monsoon has given some respite in terms of easing food inflation over the near term, the recent rupee depreciation has clouded the inflation outlook", says R Sivakumar, head (fixed income), Axis Mutual Fund.

Any depreciation in the rupee increases imported inflation, led by two biggest imports - oil and gold. Substantial gold imports will weigh upon the April-June current account deficit, the financing of which is a concern in the light of bouts of FII outflows.

The Reserve Bank of India (RBI) did not change its key policy rates-repo and reverse repo rates-in its June 17 monetary policy review. "On the inflation front, easing commodity prices at the global level and lower pricing power of companies at the domestic level are having a softening influence," the RBI said in its statement.

According to the central bank, the inflation outlook will be determined by suppressed inflation being released through revisions in administered prices as well as the recent depreciation of the rupee.

Though the RBI has cut the repo rate (the rates at which it lends to banks) by 75 basis points in 2013 to encourage growth, this has not reflected in bank lending rates. One basis point is one-hundredth of a percentage point.

The domestic bond market has shown a stark reversal of sentiment when compared with the extreme bullishness of barely a fortnight ago based on expectation of a 25 bps cut in the policy rates. This led the 10-year benchmark yield to jump 15-20 bps, reducing the returns.
Tags: Indian rupee | rupee | US dollar | rupee fall | rupee depreciation | foreign exchange | food inflation | CAD | current account deficit | Federal Reserve | FII outflows

Deduct tax when buying a house