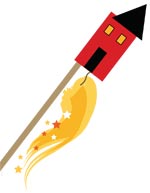 House prices in metro and non-metro cities have shown a significant rise in the April-June 2011 quarter, according to data released by the National Housing Bank (NHB). Bhopal posted the highest increase, with prices of homes surging by 46.4% in the June 2011 quarter compared with the year-ago period. Compare this with the return given by gold. As on 12 September, the annualised return from gold was 48%.

According to the latest figures, 13 of the 15 cities tracked by Residex, NHB's housing price index, showed an increase in the June quarter over the March quarter. House prices in Bhopal increased by 34.1%, followed by Faridabad (33.3%) and Kochi (24.4%). Property prices in Delhi, Mumbai and Bangalore have shown an increase of 16.7%, 3.4% and 4.5%, respectively. Kolkata and and Jaipur witnessed a decline of 8% and 4.5%, respectively, in prices of residential houses.

The rise in property prices has been despite frequent hikes in lending rates.

Experts have been saying that the demand for properties has been depressed due to the economic flux. "The stagnancy in demand might impact residential sales, thereby forcing developers to cut prices," Magazine adds.
TweetYoutube

US Indices Come to India