Rate Cut May Not Bring Any Relief

Interest rates were set for a downward revision. The big question was the magnitude and timing of the reduction.

On 19 March 2013, the Reserve Bank of India (RBI) reduced the repo rate by 25 basis points (bps) to 7.5 per cent. The cash reserve ratio has been left unchanged at 4 per cent. It was last reduced in January by 25 bps.

The magnitude of the rate cut, which conforms to expectations of analysts, is unlikely to ease the burden of consumers. The RBI had reduced the repo rate from 8 per cent to 7.5 per cent in its mid-quarter review of the monetary policy in January.

Repo rate is the key policy rate at which banks borrow from the central bank. One bps is one-hundredth of a percentage point.

"The RBI has delivered on expected lines and has maintained a balanced approach on the growth-inflation dynamic in its guidance," says Dinesh Thakkar, chairman and managing director, Angel Broking, a broking company.

Thakkar says policy easing will be gradual and the RBI is unlikely to be aggressive going forward due to food inflation being at double-digits and the current account deficit remaining high. He expects an additional 50 bps reduction in the repo rate in 2013. 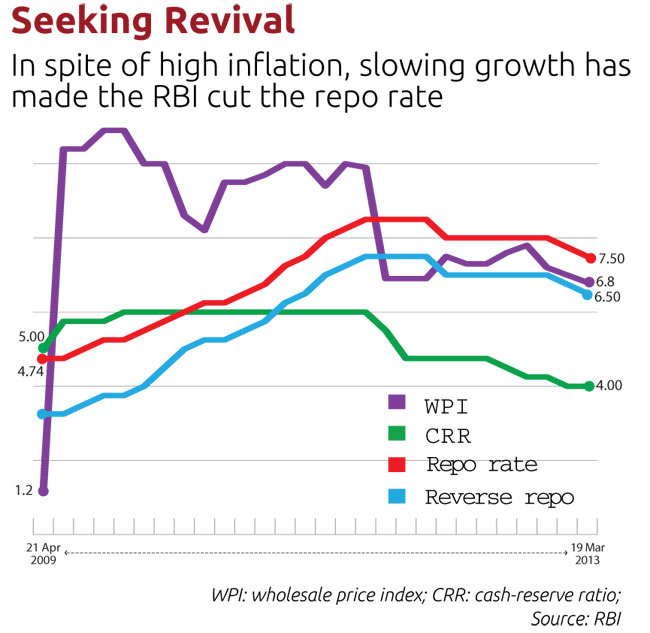 "Given the magnitude of the rate cut, the change is unlikely to have any immediate impact on lending and deposit rates," says Moses Harding, executive vice president and global markets head at IndusInd Bank.

"Money market rates (for instruments with maturity up to one year) will ease only in the new financial year. One-year rates should come down to 9 per cent from the current levels of 9.75-10 per cent," Harding says.

Most banks have already reduced rates for products with tenures of three-five years in anticipation of the rate cut, with home loan rates quoting as low as 9.75 per cent.

"We have not seen any pass-through of short-term lending rates. It seems there is no space for short-term rates to come down soon," says Harding.

Deposit rates are likely to inch up till the last week of March as the last quarter usually witnesses a liquidity crunch.

"Although the key for the industry is for lending rates to come down, this will happen only when banks are comfortable with (level of) deposits with a decline in deposit rates," says Naina Lal Kidwai, country head of HSBC India and president of Ficci, an industry body.

"In the fortnight ended February 22, bank deposits grew around 12.5 per cent and bank credit 15-17 per cent, while the credit-deposit ratio was a high 78 per cent. Banks will not cut interest rates in a hurry," she adds.

At present, banks can lend only 73 per cent of their total deposits as they have to keep 4 per cent funds with the RBI and park 23 per cent in cash, approved securities and gold.

The impact of revisions in the policy rate can be felt on government securities' yield, which has come down to 7.8 per cent from 8 per cent. Returns from longer tenure gilt funds have also been in low double-digits.

"In the current scenario, you can invest in government securities with two-five year maturity periods for risk-adjusted returns. You can use income funds for benefiting from falling interest rates," says Rahul Goswami, chief investment officer (fixed income), ICICI Prudential AMC.