How should I pay tax on the profit earned from investments in India?

I have been granted US citizenship recently. I have a bank account and a demat account in India and own a permanent account number (PAN) card. Do I have to surrender the card? How should I pay tax on the profit earned from investments in India? Am I eligible for tax deductions?
—Mina Patel, Surat

If you hold Indian citizenship, you do not need to declare your US citizenship to the bank. But if you are no longer an Indian citizen, then you should declare your altered status. In either case, you do not need to surrender your PAN card. The tax that you pay in India depends on your residential status and is not based on your citizenship. Hence, you should continue to file your tax return as in the past. If your status is that of a resident Indian, you will be eligible for deductions.

Is there a tax implication if I give a gift cheque to my mother-in-law? If she, in turn, gives money to my wife after a certain duration, will it be considered a circuitous transaction to evade tax?
—Pavan, Noida

There is no tax liability if you gift money to your mother-in-law. However, if she gives this sum to your wife, it will not be considered a tax-exempt gift. Any income earned by the gifted money will be added to your income. To avoid infringement of law, your mother-in-law can give money to your wife from her own sources before she receives the gift from you. Alternatively, she can give an interestbearing loan to your wife and you can repay her. 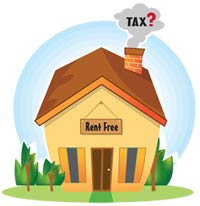 I work at the Haryana Power Generation Corporation Ltd, a public sector undertaking. I have been provided a rent-free accommodation, but am not being paid house rent allowance. However, I'm entitled to an HRA (20 per cent of my basic salary). What is my income-tax status?
—S.L. Sachdeva, Faridabad

According to the perquisite rules, the value of an unfurnished rent-free accommodation in Haryana is calculated as follows:
a) If the accommodation is owned by the employer and is in a city with a population of over 25 lakh (according to the 2001 Census), then the value of the house will be computed as 15 per cent of the salary. If the population is between 10 lakh and 25 lakh, the value will be 10 per cent of the salary. For all other towns, it will be 7.5 per cent.

b) If the accommodation has been taken on lease or rent by the employer, the value of the house will be the actual amount of lease rental paid or payable by the employer, or 15 per cent of the salary, whichever is lesser.

The calculated amount will be added to your salary for taxation.

I am a senior citizen and want to gift my wife some shares that I had bought three years ago. What is the procedure? Will either of us have to pay tax? If my wife sells these shares, how will the profit be taxed?
—N. Ganesan, Delhi

You will not have to pay tax when you transfer/gift shares to your wife. You can request your depository to transfer the shares from your demat account to your wife's demat account. You should prepare a gift deed listing the shares and their present value. If your wife sells these shares and earns capital gains, the profit will be treated as your income. At present, long-term capital gains from equities are tax-free. However, after the implementation of the Direct Taxes Code, such gains could be taxed at the marginal rate.

I am working in Bengaluru with a multi-national corporation, which is listed on the Nasdaq. The company has a scheme, according to which, employees can buy its shares at a discount. I had purchased shares every six months between 2001 and 2005 and sold them recently. How should I calculate the tax I need to pay? Will it have to be paid in India or the US?
—Sumant Sarkar, Bengaluru

The profit from the sale of shares, which are listed on the Nasdaq, will be included in your total income and taxed at rates according to the income slabs in India. Since you are working in Bengaluru, your status will be that of a resident Indian. Hence, the tax should be paid in India.

I am a non-resident Indian and have a bank account in the UK. Is the interest earned by the deposits in this account taxable in India? What is the rate of taxation for such income and how should it be declared in my tax return?
—R.B. Mehta, Coonoor

I live in a flat that is co-owned by my father and brother. My brother, who is a non-resident Indian, has taken a loan for the house and is repaying it. Can I claim tax exemption for HRA, which is Rs 8,000 a month, by paying rent to my parents or brother? Will it benefit my brother if I pay the rent to him as he is repaying the home loan? He pays Rs 17,500 a month, of which the interest payment works out to about Rs 75,000 a year.
—Niraj Dugar, Thane

Yes, you can claim HRA exemption by paying rent to your father and/or NRI brother as both are coowners of the house. However, you cannot pay rent to your mother as the property is not in her name. The rent you pay to your father or brother will be taxed in their hands after a 30 per cent standard deduction. Your brother can also claim deduction for the Rs 75,000 he pays as interest on the home loan under Section 24(b). The principal repayment can also be claimed as deduction under Section 80C (up to Rs 1 lakh). If you pay him an annual rent of Rs 96,000, there won't be any tax liability for him. Your exemption will be the least of the following:
a) Actual rent paid.
b) HRA received, less 10 per cent of basic salary.
c) 50 per cent of basic salary in metros and 40 per cent for other areas. I could not pay the EMIs for my education loan in 2008-9. According to the interest certificate from the bank, the required amount is Rs 18,000 for 2008-9 and Rs 4,000 for the current year. I paid the entire amount this year. Can I claim this sum as tax exemption for 2009-10? Do the same rules apply to home loans also?
—Nikhil Gupta, Hyderabad

The deduction for interest on an education loan is allowed on payment basis. Hence, you will be allowed to deduct the entire amount of Rs 22,000 from your income for the current year. However, deduction on home loans is allowed on an accrual basis. So, if you have not paid the interest on the home loan and it has accrued during the current year, you will be allowed a deduction of only up to Rs 1.5 lakh for a self-occupied house.

Can I claim tax benefit on the second house?