Cashing In On Offers

Just pay 20 per cent price of the apartment and the rest at the time of possession. No instalments till possession. Get 12 per cent discount on one-time payment.

With festive season around the corner, real estate companies and brokers have started raising their sales pitch. But are these deals for real or a ploy that developers use to raise money and to prop up sales?

FACING REALITY
Real estate companies have been grappling with falling demand and liquidity crunch over the last few years. Prospective buyers who held back purchases during the economic slowdown are now expecting prices to fall.

FROM THE MAGAZINE:How to minimise risks in real estate investment

Lack of funds at reasonable rates and waning demand have disrupted the cash flow of developers. The increase in provisioning for bank loans to the sector has also reduced the availability of funds. Provisioning is setting aside funds for possible losses arising due to loan defaults. However, banks continue to lend money to individual home buyers.

"As far as the cost is concerned, borrowing from banks (at 14-16 per cent) would have been ideal for developers. However, with banks cutting exposure to the real estate sector and private equity funding (at 20-30 per cent) expected to fall, non-banking financial companies (NBFCs, which lend at 18-25 per cent) have emerged as the primary source of funds. NBFCs are likely to lend more than Rs 3,000 crore to the real estate sector this year," says Neeraj Bansal, director, KPMG India, a consultancy.

Banks are one of the cheapest sources of funds but do not lend to all developers.

FROM THE MAGAZINE:Tips to ease stress of booking a property

So, innovation is the only way out in a market where reducing prices will irk existing customers and affect demand from investors looking for quick returns. The only option is to offer discounts and interest subsidies. 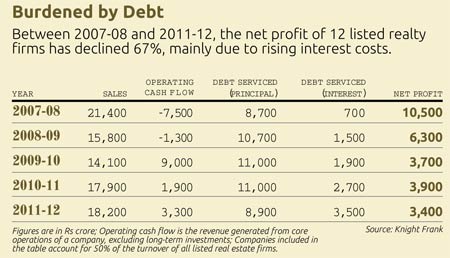 Burdened by Debt: Between 2007-08 and 2011-12, the net profit of 12 listed realty firms has declined 67 per cent, mainly due to rising interest costs.
DIRECT DEPOSITS
Project delays are common in the Indian real estate market. What should you do when a developer offers a higher interest rate than bank fixed deposits if you deposit more money with it than you are obliged to under the agreement?

For developers, funds at 10-12 per cent (discounts they offer) are a bargain in this market. The buyer, too, benefits, provided the developer can deliver on its promises.

FROM THE MAGAZINE:How to invest in realty for steady returns

"If the interest rate is reasonably high and you are sure the developer is not cash-strapped, you can park your disposable money with it. However, it is not easy to know the liquidity position of a builder," says Ahuja of C&W. "It is safer to keep your additional money in regular debt or liquid savings schemes," he says.

Such arrangements may lead to several issues. "A developer may struggle to convince enough people to park their money with it so that it can meet its cash-flow requirement. Also, liquidity and counter-party risks are much higher in this compared to traditional investment channels (such as bank deposits, equities and debentures)," says Bansal of KPMG India.

Counterparty risk is a risk that the other party to the contract might be unable to fulfil its obligations.

NO INSTALMENTS
Paying instalments before you own the property is a burden, especially for people who stay on rent. So, developers are offering 'no EMI (equated monthly instalment)' or 'EMI sharing' schemes in which buyers have to pay a part of the price at the time of booking the property. The developer then ties up with lenders to provide them loans and bears the interest cost during the promised period.

"The EMI-sharing scheme helps developers generate cash flow as they receive 100 per cent payment upfront. Generally, the buyer has to pay 20 per cent of the full amount; the bank finances the rest," says Bansal

Interest subvention schemes can be a win-win for both buyers and developers.

FROM THE MAGAZINE:Why affording a house has got simpler

"Since banks provide funds based on progress of the project, the interest of the buyer is protected. The developer is assured of cash flow and can complete the project within the defined timelines," says Ashish Sarin, executive director and chief financial officer, Alpha G:Corp, a developer with headquarters in Gurgaon.

Such schemes reduce the buyer's burden but don't eliminate the risk. "While opting for an interest subvention scheme, customers should prefer reputed developers who complete projects in time," says Bansal.

UPFRONT PAYMENT
Developers have been offering a discount (usually around 12 per cent) if the buyer pays the full amount upfront. Buyers save money but also take a larger risk.

For the developer, it's a profitable deal. "It can help the builder offload inventory and generate funds for under-construction projects," says Bansal of KPMG.

If the buyer pays a part of the property's price, the builder will have to take a loan to cover the funding gap. As the cost of funds for commercial real estate is at least 14-16 per cent a year, a 12 per cent discount allows the real estate company to save on interest.

"Basically, these are short-term funding opportunities. Builders offer discounts depending on the progress of the project and the stage at which the buyer applies," says T Chitty Babu, chairman and chief executive officer, Akshaya Pvt. Ltd, a Chennai-based developer.

ASSURED RETURNS
In a bid to invigorate sales, commercial property developers are offering guaranteed returns on investments in shops and offices. Under these schemes, the buyer has to pay the entire price upfront to become eligible for a monthly return (generally 1 per cent).

The developer generally guarantees a minimum return through lease rental for a certain period. It continues to pay till the property is leased out," says Ahuja of C&W. "This helps developers raise funds at 12 per cent instead of paying more to a financial institution," he adds.

However, a builder suggests caution. "Builders offer, say, 1 per cent per month on the amount paid, but it is often made possible by charging a higher rate at the time of booking," says Goyal of RG Group.

SOFT LAUNCHES
Unlike in developed markets such as the US, real estate companies in India depend on cash flow from buyers. To attract buyers and generate funds, developers offer above-average discounts even before they launch the projects formally.

In many instances, they give prelaunch or soft-launch offers even before the approvals are in place. While many demand 20-30 per cent price of the property value upfront, some ask for the entire amount.

FROM THE MAGAZINE:Rise in realty prices to be inflation-driven

However, this may be a risk for buyers. As several approvals are yet to be taken, the project may be delayed or even scrapped.

"Soft launch is considered risky for buyers. However, once the project is officially launched, developers start increasing prices. At the same time, they allow buyers to sell underconstruction properties after payment of 25-30 per cent price. So, buyers can make a profit by selling their stake either to the developer or a new investor," says Bansal of KPMG.

For soft-launches, developers tap a select group of investors and existing buyers directly and through property brokers. It works well for those looking for quick gains in a relatively short period, say, a year.

The offers by developers have a common objective-persuade buyers to invest and generate cash flow for their projects. So, the next time you come across an interesting looking offer, check if it is actually helping you save money.

How to deal with delayed property project