Given the downturn in the economy and the real estate sector, the realty companies are rushing to diversify in unrelated areas.

Never put all your eggs in one basket, says your grandmother. Diversify to spread the risk, says your financial planner. Of course, both are saying the same thing and it makes good financial sense. This is precisely what the organisations are doing these days. Core competence is no longer the buzz, diversification is. With the real estate cycle moving away from its dizzy highs, the companies in this sector are beginning to cast their nets wide in a bid to make profits.

So you have housing developers branching into telecom, power, even insurance. But why should it concern the investor? If you’re looking to invest in real estate companies, which can be had for a song these days, take a second (even a third) look. Is diversification going to make these companies profitable? Or is this just a desperate ploy to gain attention, and maybe, money?

ADVANTAGE DIVERSIFICATION
Why are realty companies rushing to set up wildly diverse ventures? Analysts say that most of these companies want to hedge the risks of the slowing real estate market. Besides, there have been success stories to spur these companies on. Unitech successfully turned an investment of Rs 1,661 crore for a telecom licence into a company valued at more than Rs 11,000 crore within a couple of months.

Most emerging sectors that have caught the fancy of real estate firms have better growth prospects than realty. For instance, insurance, in which both DLF and Unitech are exploring opportunities, is growing at 15-20% per annum. Telecom is seeing healthy growth despite the slowdown, and the government has pumped in considerable funds into infrastructure projects. Some companies have even rushed into unmapped areas. Omaxe, for instance, plans to get into training pilots and aeronautical engineers.

Apart from hedging risk, the tax benefits are attractive. “One cannot ignore the tax exemption benefits for these new projects. However, the greater benefit is in the valuation,” says Jayesh Kariya, partner, Deloitte Haskins & Sells. According to him, these new ventures are special purpose vehicles (SPVs) that can be hived off as separate businesses later or merged to derive a higher value for the parent company. “In such cases, the parent company will earn a tax-free dividend from its subsidiaries operating in these taxexempted businesses during its initial years,” he adds. 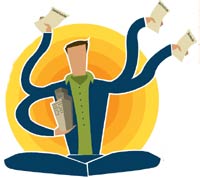 THE FLIP SIDE
The problem is that not all real estate companies have sufficient funds to sustain such unrelated diversification. Inflows are now falling with slowing demand, but cash outflows are ballooning, thanks to the rising costs, area under construction and payables on their land banks. This is aggravated by an asset-liability mismatch (high interest borrowing is largely shortterm in nature) in an era of tightening liquidity. There has been a sequential fall in growth and EBIDTA margins in past two to four quarters, with some developers even modifying accounting policies to report growth.

Diversification in capital-intensive projects also carries the risk of execution and could become a strain for the holding company. “You can’t hope to diversify successfully from a weak base. Any new enterprise will divert time, attention and money from the main business. The first step in diversifying, therefore, is paradoxical— making sure that the base activities are being run as efficiently, productively and profitably as possible,” says Shailesh Kanani of Angel Broking. A strong base also paves the way for raising funds by selling a stake in the parent company. If DLF, for instance, is required to pump funds into its insurance venture, it can easily raise money from the market.

Despite the risks, real estate companies seem to want to recreate what ITC, Wipro, Tata and Reliance have accomplished. All these companies have made huge successes of unrelated business diversification. However, given that most real estate companies are overleveraged because the slowdown has locked their cash in projects and financial institutions have turned wary of lending, diversification in capital-intensive sectors can be a risky move.

Realty companies claim that they have already borrowed funds to meet their current requirements and will not be launching new projects till the liquidity scenario improves. If there is a delay in tying up with a partner, the value of the stock can erode. It requires the company to pump in further cash. In some sectors such as telecom, a new entrant may face tough competition. According to telecom analyst Srinivas Rao of Deutsche Bank, “The deregulation in the telecom sector over the past few months has eroded the value of the telecom licences.”

Some analysts see these diversification in unrelated sectors as a desperate move by developers looking at additional revenues. “While most developers continue to make positive noises about the sector, they are investing outside. This, and their struggle to arrange finances even for the core business, are signs of desperation,” says an analyst who tracks realty.

It is not that these developers have exhausted their executable projects; they still have huge land banks where construction has not yet started. A recent report by Deutsche Bank on the real estate sector, says, “While this diversification may act as a hedge against the slowdown, it increases risks by utilising scarce resources, and thus raises concern over whether the companies will be able to deliver on their plans.”

THE BOTTOM LINE
Is diversification in unrelated areas worth the risk for real estate companies? Experts say that the decision to diversify is always a calculated risk. In terms of a growth strategy, it is possibly the riskiest option, but it is also one that can provide the greatest rewards. If the right eggs are spread around the right baskets at the right time, the prospects for real estate companies are excellent for successful organisational growth.

And so we return to the original question: should you invest in these companies? For shareholders in the parent company, the risk comes not only from how profitable these ventures will eventually turn out to be, but also from the fact that these diversifications will result in more complex balance sheets. Most property companies already have complex structures—a number of direct and indirect subsidiaries (to acquire land with ownership and transfer to the parent after the completion of project development); SPVs that own a few individual projects, joint ventures, and complex investment vehicles. Diversification will only end up adding to the clutter.

Should you buy now or add to your holding? Analysts suggest that you go easy as the market has been punishing down cycles even in other sectors and because they expect a further downside in realty stocks. According to a BNP Paribas report, “Although many Indian property companies are trading at close to valuations of global realty players, we see more volume declines affecting earnings negatively.”

Analysts also advise that any investments in real estate should be based on the strength of the parent company. Diversification in unrelated sectors should not be seen as a trigger to buy for the short term.

What property investors must know

Is it a good time to invest in real estate?